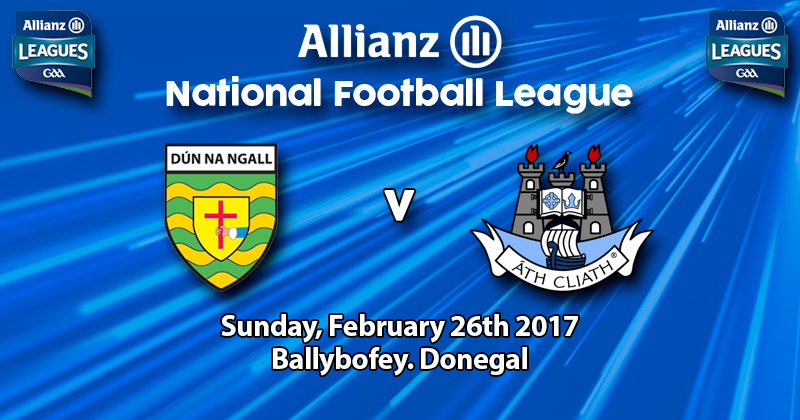 Ballybofey is expected to be a hive of activity this weekend as thousands of Dublin supporters take to the road yet again to roar on Jim Gavin’s Senior Football panel as they stare down Donegal in what will be one of Dublin’s toughest road trips this year (2:00pm Throw In).

It’s almost two years since Dublin have lost a league or championship fixture. They’ve gone on an amazing streak, winning 27 of the 31 unbeaten games. Tyrone and Mayo are the two sides that have held the Dubs to 2 draws each. Sixteen counties have tried and failed to overthrow this side.

This unbelievable run has featured Donegal three times, all coming last year. In the round stages of the League Campaign Dublin entertained The Tír Conaill Men at GAA Headquarters, beating them 1-10 to 0-07. They were to meet again in the same venue for the Semi Finals in April and the Dubs winning margin was greater, seeing them off by 1-20 to 0-13.

In August, the two were to meet again, this time in the All Ireland Quarter Finals. But the same outcome was unfold as Dublin advanced to meet to meet Kerry in the Semis, winning on the day by 1-15 to 1-10

Donegal have yet to find their feet this year, having lost quite a number of senior players over the winter break. Kerry handed them an opening day defeat with a goal separating them at full time at 1-17 to 2-17.

Their luck was to change in Round 2 but only managed to beat Roscommon by a solitary point in Dr. Hyde Park. And with no semi final stage in this year’s competition, every point in the league table is of paramount importance.

Dublin started well and didn’t struggle against Cavan in Breffni Park in front of a record crowd of over 16 thousand. They finished out the game at 0-18 to 0-11.

Two weeks ago, the unthinkable nearly happened. Mickey Harte’s Tyrone came to Croke Park on a wet and windy Saturday evening and held Dublin in a stalemate encounter. Dublin could have dropped 2 points but instead earned 1 with an astonishing finish to draw the game at 0-10 to 1-07.

Dublin, Tyrone and Monaghan sit atop the Division 1 Table, all on 3 points. Kerry, Mayo and Donegal all have 2 points, Cavan grabbed 1 point last week after a draw with Monaghan. And Roscommon trail the pack at the bottom.

It sets thing up for an interesting weekend, with plenty of points up for grabs.

The Blue Army will be in Ballybofey, will you?

CONNOLLY DECIDES NOT TO CONTINUE HIS APPEAL AGAINST 12 WEEK BAN