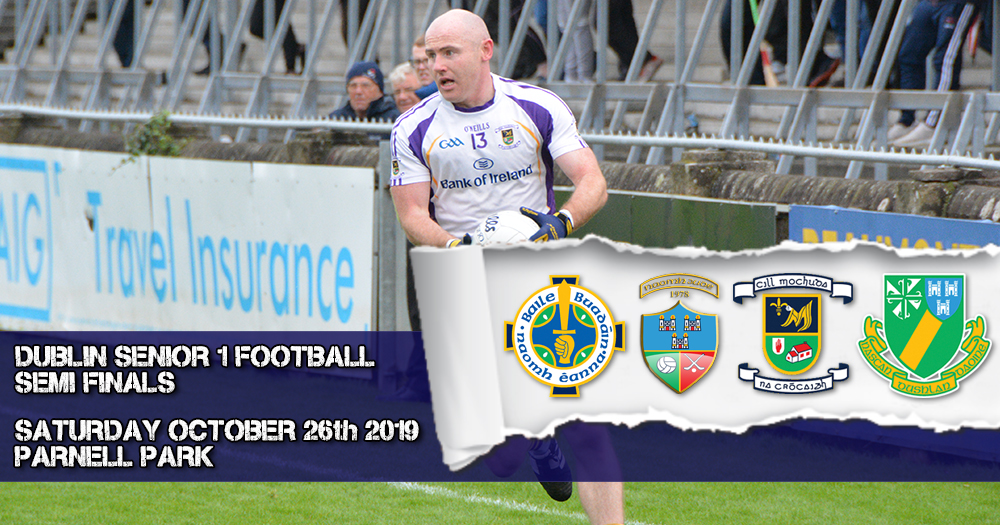 We were treated to some cracking football this past weekend in the Dublin Senior 1 Football Championship Quarter Finals. Over two days, eight teams battled it out, and now there are four remaining. And on Saturday, October 26th Parnell Park will again host a double header of action.

Two goals in the second half of extra time from Colm Basquel saw Ballyboden St. Endas finally overcome the challenge of Na Fianna to advance to a third consecutive Semi Final.

For Na Fianna the result must have been soul destroying. They were leading by 0-04 with just five minutes of normal time remaining. The first of three Colm Basquel goals and a converted ’45 from keeper Darragh Gogan saw Boden snatch a draw. That sent the game to overtime.

In the earlier of Saturday’s Quarter Finals, St. Judes dealt St. Vincents a championship blow for the second year running sending the Marino outfit packing. Winning by 0-11 to 0-04, credit must go to the Judes defence. They held the Vincent’s forward line to four score across the entire game. And three of those came in the first half.

Padraic Clarke and Kevin McManamon led the charge for the Tymon Park side as they reached their fourth consecutive Semi Final.

Reigning Champions Kilmacud Crokes powered past Clontarf in the second half of their last eight game on Sunday. Clontarf had the slenderest of leads going in at the break. But the introduction of Dublin Senior Forward Paul Mannion for the second session kicked Crokes on as they dominated the remainder of the game.

Outscoring their opponents by ten scores to one, and with Clontarf losing Jack McCaffrey to red card gave Crokes an edge they wouldn’t lose.

Their Semi Final opponents Thomas Davis showed their grit and character in the second of Sunday’s Quarter Finals. Goals from Ryan Deegan, Ciaran Farrelly and Brendan Kirby saw the Kiltipper Road side push Castleknock in the back foot for the majority of the game. And some fine defending from Adam Farrelly and Cian Murphy kept that Castleknock attack from gaining any momentum in the second.

Thomas McDaniels, Gerard McDermottroe and Ciaran Kilkenny were key to Castleknock’s drive, but ultimately the two goals in quick succession from Thomas Davis had their opponents reeling and they failed to recover enough to mount a challenge.