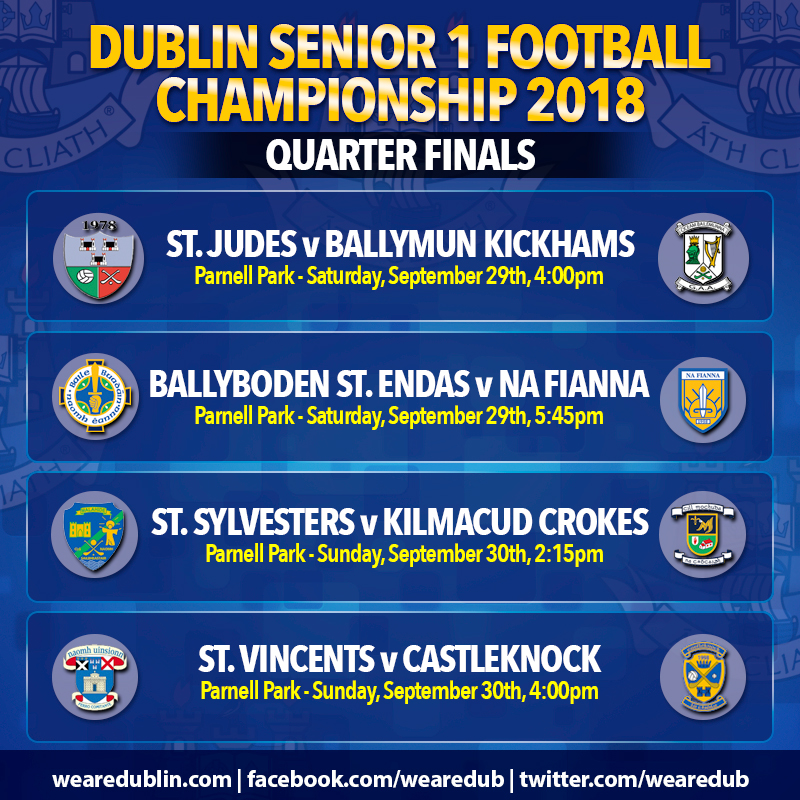 The dates, times and venue for the Senior 1 Football Championship Quarter Finals have now been confirmed.

Wins over Ballinteer St. John’s and Parnells saw St. Judes finish second Group 3. They’re only defeat was to table topper Sylvester’s. But they’ll have a tough job on their hands when they face last year’s beaten finalists Ballymun Kickhams. Ballymun went three for three in Group 4, beating St. Brigids, Clontarf and Castleknock to earn their spot. Both sides were successful in last year’s Quarter Finals, beating Cuala and St. Brigids respectively, but next weekend only one can advance. The bookies favourites would be Ballymun but you couldn’t rule Judes out completely.

A win against Raheny and a draw against St. Oliver Plunkett Eoghan Ruadh was enough to get Ballyboden St. Enda’s out of Group 1. And they face Na Fianna on Saturday week. the Mobhi Road outfit had similar fortune to their opponents, beating Lucan Sarsfields and drawing with Skerries Harps. Both sides will be looking to improve on last year’s Championship run. Boden didn’t make it out of Round 1, while Na Fianna only went one round the better, but lost to Vincents and didn’t make the last eight.

Kilmacud Crokes finished their Group 1 campaign on top, beating Ballyboden, Raheny and Plunketts to set up next weekend’s Quarter Final with St. Sylvesters. Syls also had a perfect round robin campaign in Group 3 seeing off Judes, Ballinteer and Parnells. Crokes made the Semi Finals last year only to be beaten by Ballymun Kickhams, so will be looking to get there again. Sylvesters suffered a heavy defeat to Vincent’s in last years last eight and after a convincing group competition, they’ll up for Crokes challenge.

A repeat of the 2016 County Final as reigning champions St. Vincents take on Castleknock. Another clean sweep this year for Vincents, beating Na Fianna Skerries and Lucan to top Group 2. Castleknock were runners up to Ballymun in Group 4, beating Clontarf and St. Brigids. Vinnies are looking for their third county title in succession after beating Castleknock in 2016 and Ballymun last year. Castleknock were beaten in last year’s Quarter Final by a point against Kilmacud so they’ll want to get back to the form they showed the year previous.