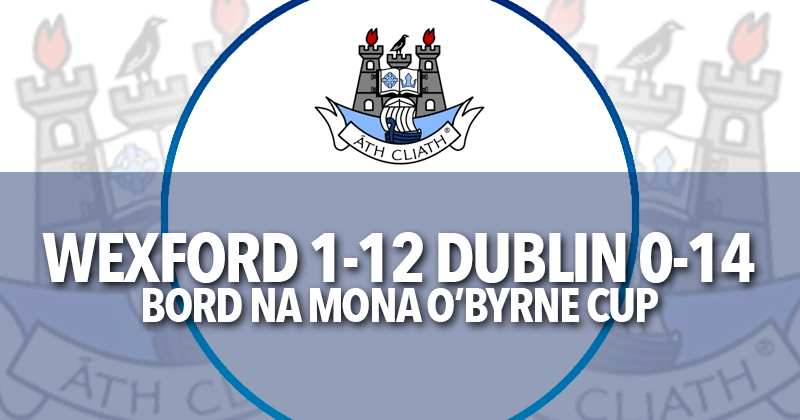 The task this afternoon was always going to be a tough one for Paul Clarke and his experimental Dublin panel, but Wexford got the better of the O’Byrne Cup Champions, sending them out of the competition.

Stoppage time scores from Craig McCabe and Barry O’Connor were the difference, handing Wexford the victory, but unfortunately it was enough even for them to qualify for the Semi Finals.

The first half was only 7 minutes alive when Wexford captain Daithi Waters chanced on a superb individual goal making the score 1-02 to 0-01 in their favour. By half time the Dubs were trailing 1-09 to 0-06 with Colm Basquel, Paddy Small, Adam Rogers and Glen O’Reilly on target.

Dublin did attempt a spirited comeback after the break holding Wexford to 0-03 and scoring 0-08 themselves but it was never going to be enough as they needed to win by 17 clear scores to have any chance of making the Semi Finals. Small and Basquel again contributed to the cause, along with 0-02 for Emmett O’Conghaile and one from Brian Howard.

On the 70th it looked like substitute Kevin Callaghan may have clinched the win for Dublin but with added time to follow there was enough for McCabe and O’Connor to put the competition away for the home side and end Dublin’s reign as Champions.