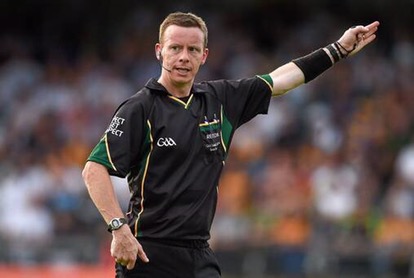 Yesterday on a wet and bitterly cold night, Dublin and Tyrone played out a tense draw last night in their second round Allianz National Football League clash in Croke Park.

But after the game the talk was not about Tyrone failing to turn a five point lead into victory or about Dublin’s fight back and extending their unbeaten run in League and Championship to 31 games.

No all the talk was about the inept and at times baffling performance of Cavan referee Joe McQuillan, the man in the middle seemed to make it up as he went along and completely lost control of the game.

Two minutes into the game and a high elbow by Niall Sludden on John Small was not punished by McQuillan, just one of a number of incidents both on and off the ball committed by Tyrone players, including another blatant elbow into the face of Paul Mannion, that the Cavan referee chose to ignore.

Dublin players and supporters got increasingly frustrated with the Cavan whistler’s performance as he constantly penalised Dublin for any contact, even minimal, of Tyrone players, yet on the other hand allowed much more robust tackling, some of it outside the rules of game, from Tyrone.

McQuillan was quick to penalise Dublin players for over carrying when two or three Tyrone players swarmed around them, yet was quite happy to give the Red Hand county men time to work the ball out when Dublin did it.

The amount of times the referee made Stephen Cluxton retake his quick restarts bordered on the ridiculous.

McQuillan did get a few calls right, the black card for Tiernan McCann was justified and the red card for Mark Bradley was another correct call for a punch to Jonny Coopers face and not for pushing as some outlets are reporting although it was more down to the linesman spotting and bringing it to the attention of McQuillan.

But then he failed to punish Sean Kavanagh for hauling down Mannion for the penalty as his inconsistent display continued throughout.

There were many more decisions that were downright baffling from McQuillan in the game and the third man tackle supposedly outlawed from the game was completely ignored by the referee all game.

Such was the huge free count in Tyrone’s favour at half time, McQuillan then somewhat tried to be less one sided in his calls in the second half thus annoying the traveling Tyrone supporters.

The game has moved on over the last few years, county teams are professionally trained and prepared, the pace that games are played at has increased, but the standard of officiating hasn’t followed suit and the inconsistent performances from many of the referees continues to get worse.

Now refereeing is a hard and thankless job and they are only human and it’s unrealistic to expect them to get every single call right. But at the same time there should be as a minimum, a consistent level of performance in applying the rules of the game impartially to both sides in a game.

The referees also need more help from their linesmen and umpires in officiating games, far too many of them believe their only job is to wave flags, ignoring incidents straight in front of them that should be brought to the attention of the man with the whistle.

Something has to be done to bring the performance levels of all match officials up to scratch, as they are well below an acceptable standard and it’s ruining games for both players and supporters who deserve better from the Association.

But unfortunately for the time being at least, this topic will be revisited many times over the season and players and supporters are in for more frustration and annoyance at games in 2017.