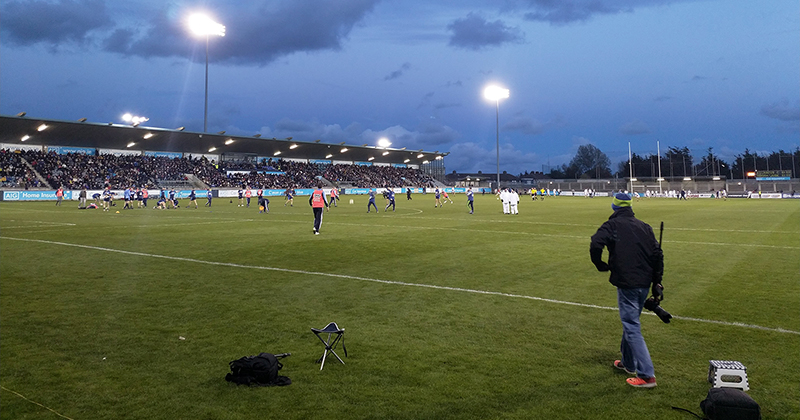 It certainly won’t go down in history as the best Dublin Senior Football Final, but nonetheless Paul Mannion and Kilmacud Crokes did enough to lift the Senior Championship for the eight time in their history. Six years ago they were beaten finalists, losing to Ballymun Kickhams, but tonight the gap was bridged.

Dublin Star Paul Mannion bagged 1-06 tonight putting in a match winning performance for the Stillorgan outfit, who bossed Judes form the throw in. Judes to their credit managed to pull back within one score of Crokes in the second half, but it was never going to be enough, with Crokes dominating the play.

Kilmacud’s running game made it difficult for Judes in the first half with Craig Dias and Conor Casey easily moving through midfield. And their wing backs Cian O’Connor and Cillian O’Shea were constantly putting Jude’s on the back foot.

Crokes were 0-4 to 0-0 ahead by the 14th minute, thanks to Paul Mannion (3) and Shane Cunningham, and it was the 17th minute before a Niall Coakley free got Judes up and running. Kilmacud remained one step ahead for the entire thirty minutes though. Seamus Ryan and Niall Coakley scored the remaining two points for Judes in the half.

Johnny Magee’s men made life difficult for Kevin McManamon, but with Chris Guckian working well in defence it did offer Judes a lifeline.

At 0-07 to 0-03 by half time, the game wasn’t quite over, but Judes needed something to lift things or not stand a chance of contesting the game.

And there definitely was evidence of a comeback from Jude’s after the break with Tom Lahiff and Chris Guckian getting up to score and at one stage they closed to within a point, 0-8 to 0-7 after 38 minutes.

But Paul Mannion gave a resounding response with a sixth point before Pat Burke got Crokes’ first goal on 40 minutes, following a great build up from Cian O’Connor.

Hats off to Jude’s though, refusing to take a beating and continued to press, hitting three points on the trot as Kevin McManamon began to find his feet in the game.

By the 49th minute there were just two points in it and as Dias and Niall Coakley exchanged points. Could Jude’s dig deep for a big finish?

Unfortunately for them, Mannion came good again, this time receiving from a Craig Dias pass and slipping a shot under Liam Mailey and into the net. Which summed up Judes night. Anytime they built any kind of momentum, Crokes managed to stifle their speed and slow things right down, maintaining possession for long spells and striking just at the right time.