The latest guest on DUBSTV’s “The Hop Ball” was Pat Gilroy. The man who brought Sam Maguire back to the capital after a very long hiatus. And since the 2011 season, Dublin have enjoyed an additional 6 All Ireland successes, with the 2019 title their fifth in a row.

During that time, Dublin’s only blips were in 2012 and 2014. And on this week’s installment of the AIG sponsored series, Pat Gilroy give some insight into, and takes full responsibility for their disappointing Semi Final loss against Mayo.

On September 2nd of 2012 Connacht contenders Mayo ran out 0-19 to 0-16 winners over Gilroy’s charges. And it would end up being Pat’s last game in charge of the county set up. But he openly admits that he was looking past the Semi Final to Donegal, the team that eventually lifted the All Ireland that year.

Mayo were six scores the better at half time in the game, and at one point were ten points clear.

“Donegal were so strong and they were doing so much damage to teams, I had an eye on them and how I wanted us to play (in the final) and I didn’t spend enough time on Mayo” Gilroy told presenter Eamonn Fennell.

“I was travelling up watching them in the Ulster Championship. I was watching every video I could get my hands on, to make sure we had enough things in our armoury.”

Pat takes all the blame for his side going into a ten point deficit. And admits that had former mentor Mickey Whelan still been on board, he’d have never allowed it to happen.

“That’s one thing that Mickey would have been excellent on. He’d have been probing and asking more of them. I had spent a little bit too much time looking at Donegal. I saw them as the real danger that year.”

Gilroy has savoured being a spectator

Despite ending his managing days with the Dublin footballers though, Pat like all of us has thoroughly enjoyed the past number of years, as Jim Gavin took his team and converted them into a six time winning Championship side.

Another Unchanged 15 As Dublin Face Meath In Leinster Decider

All Ireland Football Semi Finals Slots Up For Grabs This Weekend 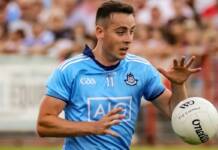 BYRNE, BASQUEL AND O’GARA GIVE GAVIN AND CLARKE FOOD FOR THOUGHT