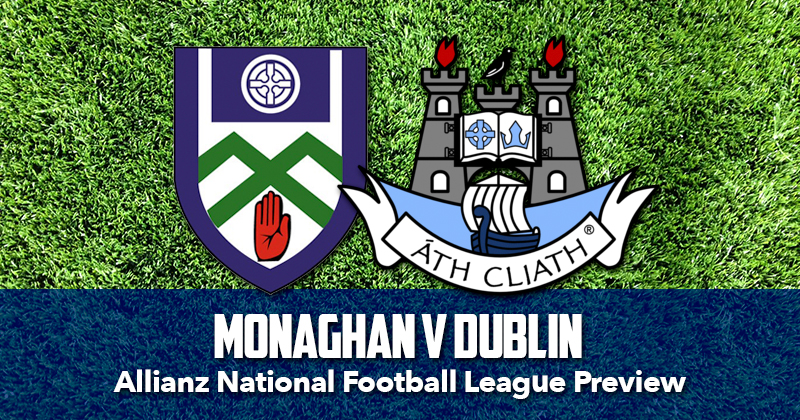 It’s the final round in Division 1 of the Allianz National Football League and so much hangs in the balance tomorrow for the majority of teams invloved.

Two heavy hitters will take to the field in Clones at 2:00pm as the blue wave of Dublin and its supporters will descend in numbers on Monaghan. With them they will carry their 35 game unbeaten run, a solid reminder of what this team has achieved and their intentions for 2017.

But Dublin have dropped points three times in this campaign, and on two of those occasions it was at the hands of Ulster opposition, which will give some encouragement to a Monaghan side how have enjoyed a relatively positive league campaign.

The Farney County have beaten Mayo, Kerry and Roscommon, tied games with Cavan and Donegal, and their only loss was in Round 4 against Tyrone. They sit one point behind Dublin in the table with Donegal wedged between them, 6 points better off on score difference.

This year, Conor McManus has been joined by the scoring antics of Jack McCarron, which has increased Monaghan’s options. But McManus still remains the danger man facing the Dublin defence tomorrow. And tomorrow they’ll be looking to fire on all cylinders as they look to stop the reigning League and All Ireland Champions. A win tomorrow will see them take a spot in the league final.

Dublin come into tomorrow’s game off the back of a hugely comprehensive victory over Roscommon, which saw the return of a few of their more seasoned panel members. In their win last weekend, and in the wins over Mayo and Cavan, the boys in blue have looked more than convincing. They’ll use the disappointment of the three drawn games in the campaign as food for thought as they take to the playing surface in St. Tiernach’s Park.

Tomorrow there will be no talk of the 35 game unbeaten record as Jim Gavin’s side will simply be looking to land a place in the final and the chance to clinch their fifth consecutive league title.

The Dublin manager has named a very strong 15, again including last week’s Player Of The Match Paul Flynn, who’s performance in Croke Park was one of the best of his career. Bernard Brogan also made his first league start last week and will again tomorrow.

With Dublin’s score difference far surpassing the rest of the pack, a draw would be a sufficient result in Clones but there’s no doubt Jim Gavin will want the comfort of a win to secure their place in next week’s final. But there are scenarios that still need to be considered.

Should Monaghan put an end to Dublin’s unbeaten run, and Donegal were to take the points in Castlebar, then the Ulster pair would fight out the decider.

A win for Tyrone against Kerry, partnered with defeats for Donegal and Monaghan would see Mickey Harte’s team in the Division one final for the first time since 2013.

So the final in this year’s league is in no way cut and dry, and the eyes of the Clones crowd could very well be focused on the results from Castlebar and Killarney come full time.