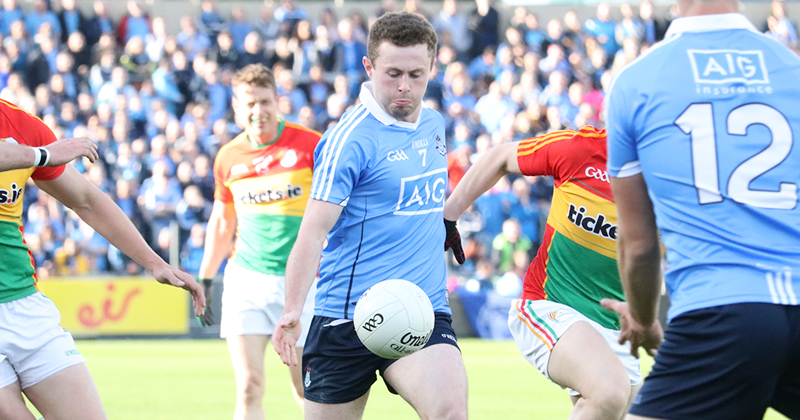 The image of Dublin wing back Jack McCaffrey on his back, hand over his face, eight minutes into last year’s All Ireland decider against Mayo is one that still haunts Dublin fans, and will for a long time. A blow that Jim Gavin would not have welcomed.

Jack, as is his determination, tried to soldier on, but it was quite clear that serious damage had been done.

It would be a premature end to his All Ireland Final, suffering a ruptured anterior cruciate ligament. In October, McCaffrey went and had the surgery to repair it. And tomorrow he’ll attend the Sports Clinic in Santry for a review with his surgeon. But so far Jack is feeling positive.

“I did one of these interviews a while back” Jack told the42.ie, “and said something about the start of the championship which was thrown around but I’m not going to put any kind of dates on it.”

“This is your knee. You’ve to make sure you’re 100%. There’s no point pushing on going back. There’s so many stories I’ve heard of people setting dates trying to make it and setting themselves back nearly to square one so that’s something I’m really trying to avoid.”

And it’s not just Dublin’s Allianz League campaign that Jack is missing. In his fifth year attending UCD, McCaffrey is sorely missing being part of the Sigerson Cup. This afternoon Jack was travelling to DCU to see his side book their semi final spot.

“I’ve tried to stay as involved as possible. I’m really enjoying standing on the sideline, shouting at people. It’s hard to do anything wrong – no one can give out to me but I can give out to everybody.”

“We lost last year in the final by a point to Mary’s and obviously were very disappointed but you always kind of had in the back of your head, ‘Ah, we’ve another year’. Obviously, I don’t.”

But despite the frustration and annoyance the 2015 Footballer of the Year is feeling, Jack is trying his best to stay focused and not push too hard for fear of making matters worse.

“I always have the same perspective that football is something that could for a variety of reasons end up being taken away.”

“At the start, there’s question marks over whether you’ll ever get back and then you realise, ‘You know what, I really want this, I really enjoy this and I’m going to move heaven and earth to get back to where I was.”

IT’S THE FINAL COUNTDOWN TO THE BIG EVENT