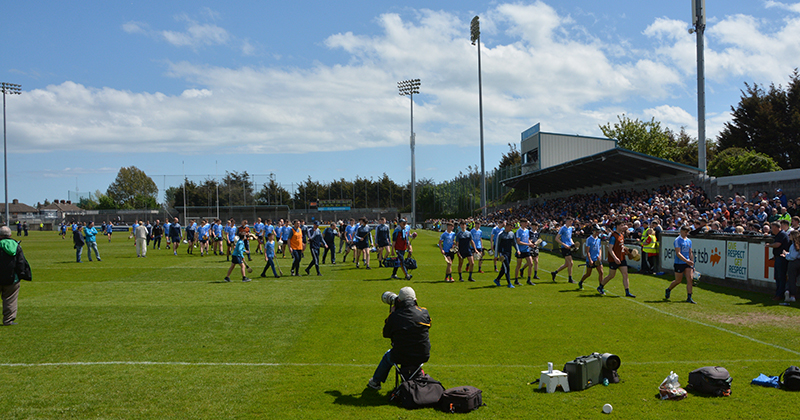 Dublin’s Senior Footballers are now preparing to go in search of a fifth consecutive All Ireland Championship. And the Dublin Senior Hurlers are only a couple of weeks away from what could be a very exciting Championship campaign. Filling the void for most fans is the Club Championship, and of course the Leinster Minor Championship. There’s been mixed fortune for Dublin’s two sides so far.

Last Tuesday week, Dublin’s Minor Footballers started their Leinster Championship Campaign with a convincing victory over reigning champions Meath in Parnell Park. That result erased the memory of last year’s defeat to the Royals. And they’ll fancy their chances when they head to Bellefield in Enniscorthy for a Round 2 clash with Wexford. The model county were beaten by a solitary score with Offaly the victors on a 1-10 to 1-09 scoreline.

On Saturday last, reigning Leinster Minor Hurling Champions Dublin travelled to Nowlan Park to face Kilkenny. The side they beat last year to clinch the title. Like the footballers, they too put in a fantastic performance, only to have a result agonisingly snatched from them in the 59th minute when Kilkenny’s Andy Hickey edged his side in front. This Saturday they’ll have home advantage against Offaly in Round 2.

But making the headlines in both competitions is a young Castleknock man, who started making people take notice last year.

Swan on song for second consecutive year as a Minor

Luke Swan made himself known to Dublin fans last year when he flourished in the Leinster Minor Championships. Then, at the age of 16, Swan amassed 13 goals and seven points across both the Football and Hurling Championship. That included 3-01 in the Leinster Minor Hurling Final, helping his side to Championship silverware. It would have been a catastrophe if Luke hadn’t been named as player of the match, which of course he was.

So it will come as no surprise that the Castleknock club man, named in last year Electric Ireland Minor Hurling Team Of The Year, has already had people talking after one game in each code.

Against Meath last week, Swan was a half time substitute for Alex Rogers and he immediately made his presence known. Finishing the game with a tally of 1-01, Luke continued to rack up his goal tally, and his green flag swung the tie back in Dublin’s favour.

On Saturday in Nowlan Park, Swan again found the target with ease in the 21st minute. And along with Ben McSweeney, helped the Dubs to a 2-05 to 0-07 half time tally.

This poses a tough question, as the day’s of Senior Duel Player at Inter County level are really a thing of the past. And both Jim Gavin and Mattie Kenny will have been keeping a close eye on both games last week.

But there’s no doubt, Luke Swan is proof that Dublin continue to produce quality athletes for the future. And it’s something to look forward to in a few years time when a player of Luke’s calibre is lighting up the senior championship, no matter what code he chooses.

KILDARE WILL BE YOUNG DUBS HARDEST TEST TO DATE