As county football champions Kilmacud continue their preparations for the upcoming Leinster Final appearance in a couple of week’s time, they’ll be buoyed by receiving the lion’s share of this year’s Dublin Bus/Herald Football Dubs Stars spots.

As for the remainder of the bench the places are filled by St. Vincents (2), St. Sylvesters, Skerries Harps and St. Oliver Plunkett Eoghan Ruadh.

It’s no surprise that David Nestor beat off the competition of Liam Mailey, Evan Comerford and Michael Savage to pick up the goal keeper slot. And you only had to witness his last minute save for Crokes against Portlaoise at the weekend for proof.

Liam Flatman and Andrew McGowan take two of the three full-back positions, with Cian O’Connor in at right half-back. Craig Dias picked up on of the two midfield slots. Shane Horan slots in at right half-forward and of course Paul Mannion’s championship performances have earned a started spot at right corner-forward.

For their efforts in their Dublin championship run, St. Judes have had Chris Guckian and Tom Lahiff in the half-back line. Mark Sweeney makes midfield, and Kevin McManamon lands a spot at left half-forward.

See below the list of winners in the 2018 Dublin Bus/Herald Football Dubs Stars Awards. 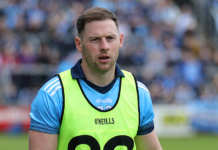 DUBLIN CRUISE INTO LEINSTER FINAL WITH EASY VICTORY OVER WESTMEATH