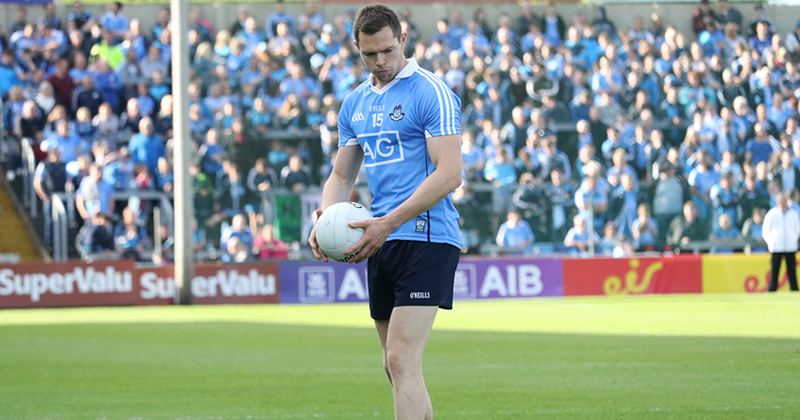 On a cold and windy April day in Croke Park, Dean Rock stood in front of the ball, placed just beyond the ‘45’, staring between the posts at the Hill end the stadium. With the clock running out, Rock needed to send this one over to force extra time in the League Final against Kerry.

The surface was wet and soft, but the Ballymun forward analysed the situation and the variables.

“I thought the wind was going from right to left, so I aimed a yard outside the right post.” Dean told the Herald.

“But the wind was directly into my face so had I aimed at the post, it would have went over the bar, but I went one yard too far to the right”.

There was a strange silence that night, not at all like the same situation as he faced the Davin end a few weeks ago.

“I knew the importance of the kick and one of my jobs for the team is to put those frees over the bar 100 per cent of the time.”

Rock, on this rare occasion mis-read the wind, and his approach. However the Dublin sharp shooter was not too beat up, and only a slight bit disappointed. Because Dean is a craftsman, always willing to continually hone his skill as a dead ball specialist.

Dean has been applauded by GAA Players, past and present for his countless hours of training and practicing his dead ball skills. And the fruits of all that training and dedication really came to light in the last couple of seasons. He meticulously studies dead ball situations in a ball sports including American Football, Rugby and soccer, so much so he could probably tell you if the player will get the right result based on their body position or alignment before a ball is even kicked.

So what could Dean possibly do to improve but work on the external variables. Well, more his fellow team mates do, taking it on themselves to try and put him off his process in training games, simply because it’s what would happen in a real game, right?

Much has now been made of the closing moments of this year’s All Ireland Final, where Mayo’s Lee Keegan threw his GPS tracking device in the path of Rock as he took his run up to the ball that eventually won Dublin the Sam Maguire one more time. But Rock himself has made little or nothing of the incident, laughing it off now on more than a few occasions.

“I genuinely thought it was a piece of muck or something that was thrown.” he admitted

“It was only after the game when it blew up on social media and it became a thing.”

“I just struck the ball over the bar, and then straight onto the kick-out to try and shut it down.”

And the rest, as they say, is now history.