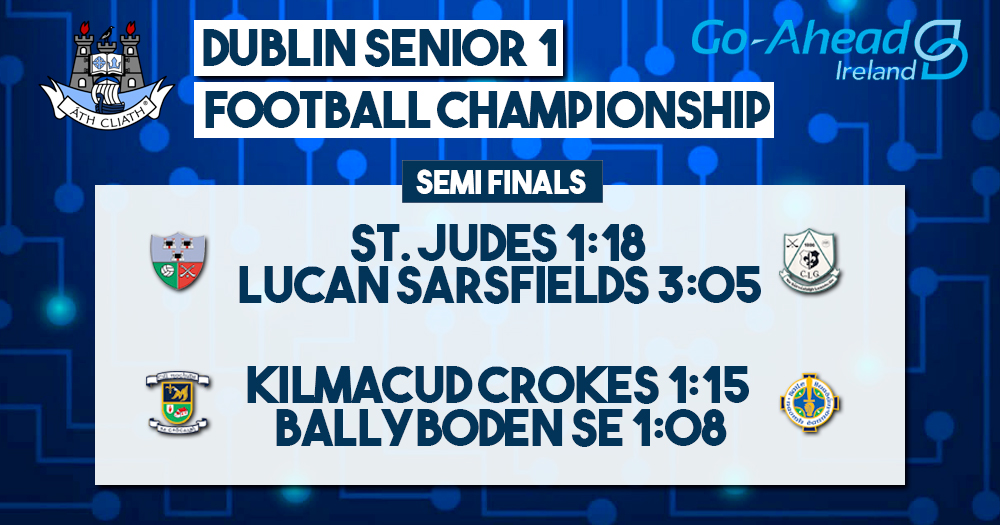 A strong third quarter saw St. Judes take control in an exciting contest. And despite a late surge from Lucan Sarsfields, Judes held on to secure their place in the Senior 1 Football decider.

It was a dominant first half from the Tymon North side. David Mannix, Alan Connolly and Niall Coakley had all scored to see them 0-03 to 0-01 up at the first water break. Credit will go to Paul Copeland in the Jude’s goal who stopped a Ciaran Smith close range attempt.

Lucan struggled to get into the game. Judes scored four unanswered points in the second quarter to push their lead out to 0-07 to 0-02. But Lucan did come out of the traps after the half time break. Brendan Gallagher blasted home a penalty, after the referee adjudged Harry Ladd had been fouled.

Judes responded with aplomb however, scoring 1-05 unanswered and all but securd victory. Pat Spillane impressed with two good scores, before Judes struck for a goal of their own on 35 minutes. A lovely pass inside from deep was flicked on by David Sheehy into the path of Niall Coakley, who finished to the net in style.

Lucan mounted a comeback with 10 minutes remaining on the clock reducing the gap to 0-04 thanks to two further goals for Brendan Gallagher from penalties; the first a rebound after his spot kick effort was saved. Late scores from substitutes Seamus Ryan, Brian Coakley and Diarmaid McLoughlin- and a final point from Spillane- ensured Judes’ quest for a first ever Dublin Senior 1 Football title remains alive.

A Senior Hurling and Football Championship Double is still on the cards for Kilmacud Crokes as they sent Ballyboden St. Endas out in yesterday’s Semi Final to advance to the decider in 2 weeks time.

The foundation was layed after a superb first half performance from the Stillorgan side. Ryan Basquel and Paul Mannion shared a brace of score in the early exchanges. But Kilmacud changed gear to outscore Boden by 1-08 to 0-01 from the 10th minute to half time.

A two point lead was all that seperated the sides at the first water break thanks to scores from Shane Horan and Tom Fox. Fox, Dara Mullin, Dan O’Brien and Mannion registered further points to push Crokes away from their opponents.

A nice score late in the half from Conal Keaney gave Boden some life. But Crokes hit the net thanks to a Shane Cunningham finish giving his side a 1-09 to 0-03 lead. And they continued to impress in the second half thanks to scores from Hugh Kenny, goalkeeper Conor Ferris (2), Cunningham and Man of the Match Mannion leaving them 12 points clear with five minutes to play.

Colm and Ryan Basquel both kicked frees late on to close the gap. And Simon Lambert blasted to the net for Boden’s goal. But it was only a consolation for Anthony Rainbow’s side. Crokes eased into the final with seven points to spare to set up a repeat of the 2018 Dublin Senior 1 Football decider.

DUBLIN U17 STARTING 15 FOR LEINSTER FINAL CLASH WITH MEATH