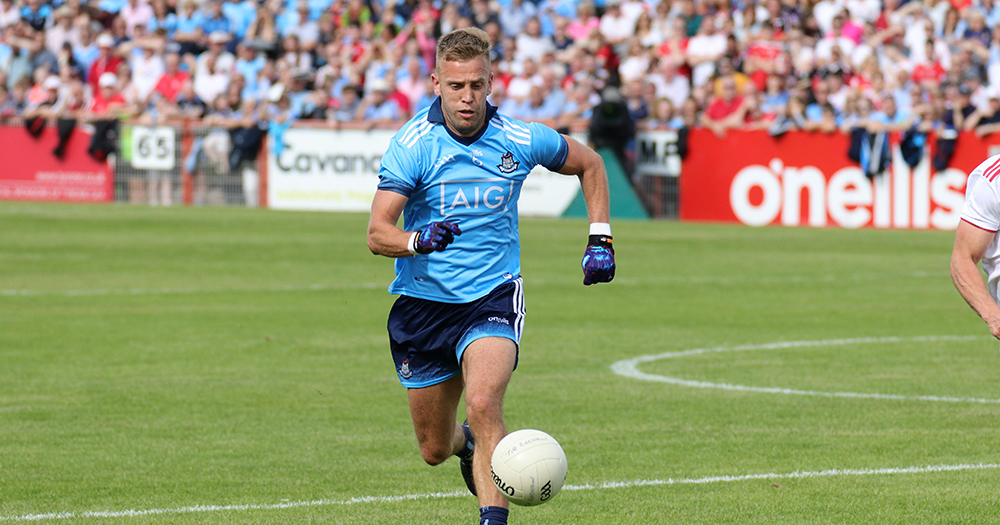 Full Time in last year’s drawn All Ireland Final against Kerry. Dublin’s Jonny Cooper must have felt like the most relieved man on the planet, let alone in the stadium.

A double yellow card in the first half. Cooper sent to the dug out to agonisingly watch the remainder of the championship decider as a spectator. But he lived to fight another day. And the emotional images of Cooper on the field as Dublin finally secured the historic five in a row will forever be etched into the minds of supporters.

Now, after an extended break from the set up, the Na Fianna man is set to return to the fold. And he is looking forward to life under new manager Dessie Farrell. And he knows he has some catching up to do.

“Certainly pushing, and asking questions of others.” Jonny told the42.ie this week.

“I was always aware that I was coming back a bit later from holidays, that the lads would have a bit more done before me. But we’ll just see when it happens and when the body and mind is able for it.”

Cooper, a Na Fianna club man, is all too familiar with his new boss Dessie Farrell. And he can’t wait to get going in this new regime.

“A really good guy, lots of experience with the GPA” Cooper says of Farrell, “very caring, compassionate, and empathetic towards the development people never mind football, just about people.”

“There is a pep in everyone’s step with a new manager, a new boss, somebody new to have to please, to get the respect of — to try to get a jersey.”

The Chance To Play Again For An Idol

As a kid, Jonny would have spent many days watching Farrell as a player playing for both Dublin and Na Fianna. And he became a role model to him, just like Jason Sherlock and Senan Connell.

“I was really lucky to go to a game on a Wednesday night to watch them when they were available. Yeah I would have watched them play, he had a fantastic spell underage with Dublin. He brought lots of current Dublin seniors under his old management systems.”

And Now as a Masters student in organisational behaviour and psychology himself, Cooper understands and appreciates Farrell’s way with the players he’s managed and mentored over the years. And knows that it’s that ethos that will bring Dublin progressively in the right direction.

“Very much any of the conversations I’ve had… and I’m doing a Masters myself, so I can speak to it directly in terms of that space, I guess the care and empathy he has towards you developing as a person… that it would complement the sports in some way. That would be the idea.”

“He pushes you to think beyond what tomorrow looks like, what is next week, what is next year, what is three years? As a person and with the pressures and challenges of senior inter-county football, I certainly think that is something that is very welcome.”

Dublin And Galway Play Their Tenth Championship Game Against Each Other...