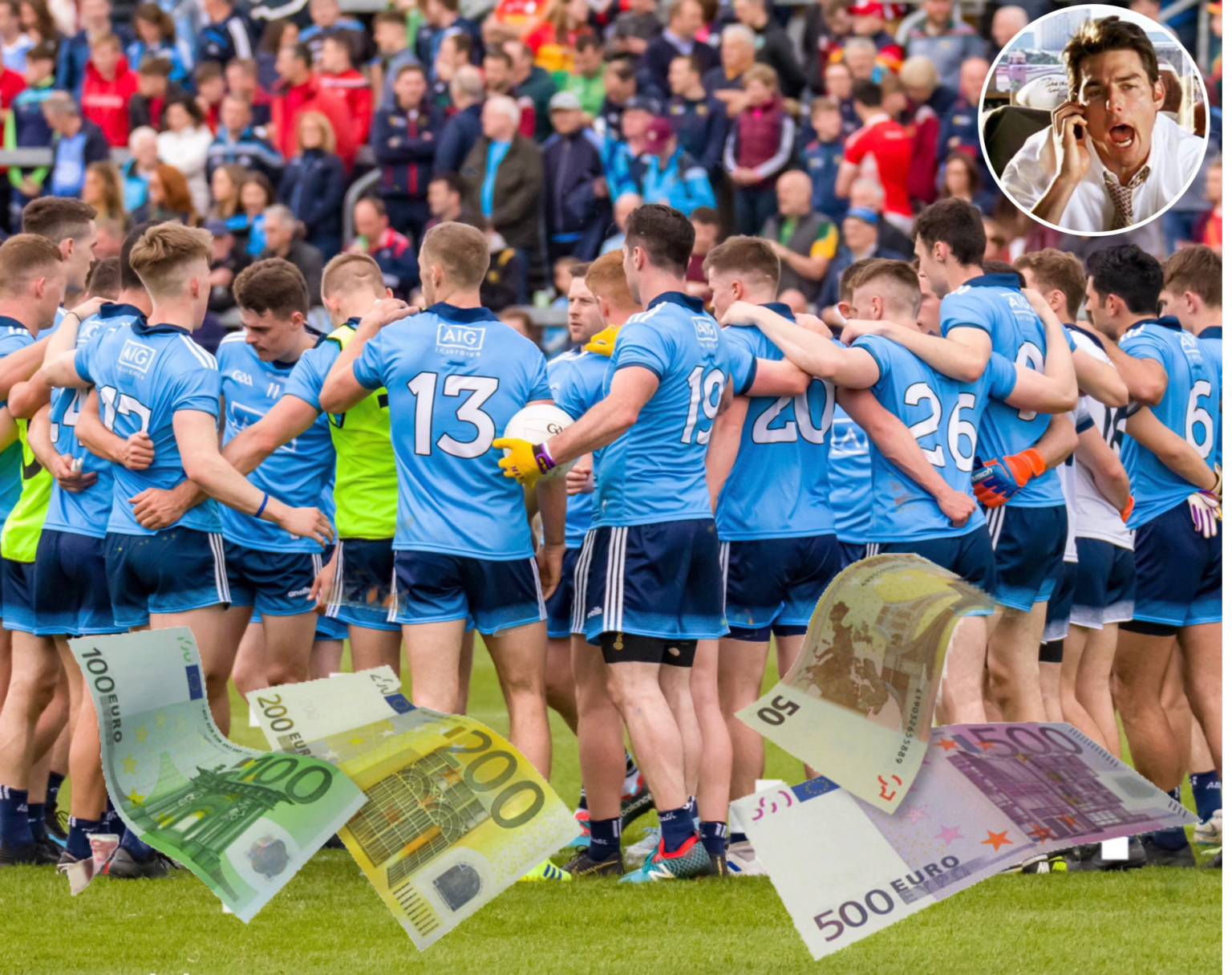 Dublin and Kerry face off in an All Ireland final replay on Saturday but this year’s championship has been played out amidst a non stop media agenda regarding the money Dublin GAA receives from both the GAA and their sponsors.

Jim Gavin’s side’s quest for a five in-a-row of All Ireland titles has caused a lot of angst among journalists, pundits, ex-players, managers and supporters from around the country.

This has led to a media driven agenda to discredit both the achievements of the Dublin team and management and to muddy the discussions around funds.

Just before the live coverage of the Leinster Final between Dublin and Meath the Sunday Game programme aired a very strange investigative style special delving into the money Dublin receive from the GAA and tried to link it to Dublin’s success on the field.

It was a cringeworthy and insulting watch and something the producers of the Sunday Game never deemed necessary to broadcast during previous periods of dominance from Kerry in football or Kilkenny in hurling.

Back to the studio and ex Dublin midfielder Ciaran Whelan was adamant that in no way had the increase in funding been a factor in Dublin’s recent success and that it was down to the hard work of a special group of players and talented manager.

But that answer didn’t fit with the false narrative that was being pushed and programme host Joanne Cantwell kept asking ‘But What About The Money’.

It was a little reminiscent of the scene involving Cuba Gooding Jr. and Tom Cruise in Jerry Maguire with Joanne trying to convince Whelo to scream ‘Show Me The Money’.

But this agenda isn’t just confined to the Sunday Game it’s being played out in every single media outlet, it’s been used to discredit the success of the players and in the past couple of weeks Jim Gavin’s credentials and place among the greatest managers in the history of the game.

All are singing off the same hymn sheet but the false story is just that, false, it’s one sided nature is easily discredited and continually throwing out just one set of figures to back up the argument with little hard evidence to back it up, (purposely done of course to muddy a coherent debate on the subject of funding), is disingenuous and biased.

The figure that’s thrown out to justify the natrative is the €18 million of coaching/game development grants that Dublin have received between 2007 and 2018 which equates over the 12 years to an average of €1.5 million a year.

Journalists have used this figure and compared it to what other counties have received in the same time frame and intimated that this is the sole reason for Dublin’s recent run of success on the championship stage and some have adopted a phase used by ex Arsenal manager Arsene Wenger, ‘Financial Doping’ as their new buzz word.

But here is were the subject of funding starts to get muddied and plays into the hands of the disgruntled keyboard warriors on social media. These journalists have steered the account to imply that the €18 million grant money has been pumped into the Dublin Senior Football team when the fact of the matter is the money has been used at grassroots level at clubs and schools to encourage children to take up GAA sports, teach the skills of the game and retain participation in the long term.

The extra funding for this was agreed because the games were dying in the city as it struggled to compete with soccer and rugby and also a multitude of others sports some of which other counties don’t have to compete against. And whether those outside of the Pale like to hear it or not the association needs Dublin GAA to be strong in the Capital for it’s long term survival.

Now those figures above can be broken down per head or per club and comparisons with other counties can be done and they can be skewed to back up an argument which has already been done without taking all the factors into consideration so it’s a futile exercise and we are not going to do that here or this piece will be endless.

But let’s look at the expenditure of counties which again doesn’t suit the money story being churned out. For all their success Dublin are not the top spenders, in 2016 Mayo were the ones flashing the cash when they spent €1.6 million, 2017 it was Cork who topped the money pile with €1.7 million and in 2018 Galway flipped out the wallet to the tune of €1.8 million.

If money is the sole reason for being successful then why did none of the above top spending sides win an All Ireland title in the years that they were the ones who were splashing the most money.

Are Dublin among the highest spenders per year, yes they are, but they are not alone as can be clearly seen above and they are also a genuine dual county.

Their success is not down to the size of the cheque they write but to their football talent, hard work and the dedication of the group. They are not the first group either to this, but they are the first to have members of the media try to discredit their achievements.

The last team to achieve four in a row were the Kerry team of 1978 to 1981 and they won their four finals by an accumulative margin of 38 points there was no talk of funding, no Sunday Game exposes, no doomsday headlines that the game was dead, instead there was lavish praise given to both the players and Mick O’Dwyer.

Dublin on the other hand have won their four finals by a cumulative margin of just 11 points, cue the marveling and praise of their success, oh wait no, that didn’t happen, instead it was Kerry left it behind (2011), Mayo left it behind (multiple times), the referee won them the game and so on and so fourth and now it was the money that won them.

The same lavish praise has been heaped upon the Kilkenny Hurling team and Brian Cody for winning 11 All Ireland titles since 2000 and rightly so, Dublin haven’t won a senior hurling title since 1938 or a minor title since 1965, God help Dublin if or when they do because it will be back to ‘it’s all about the money.’

In football terms it’s 1984 since Dublin last tasted success at minor level,(Kerry have won seven including a five in-row). A Senior Camogie title was last hoisted on the steps of the Hogan Stand back in 1984 since then Cork and Kilkenny have won 23 between them.

Money was then thrown up again when Mick Bohan’s senior ladies football side beat Cork in the All Ireland semi final a few weeks back as the narrative found another outlet. It was quite laughable considering Cork had won 11 All Ireland titles between 2005 and 2016 and were only stopped from making it a 12 in-a-row by failing to reach the 2010 final.

Of course those peddling the biased fable on funding never have any concrete solutions to their so called outrage at the ‘financial doping’ of Dublin bar the ridiculous notion of splitting the money evenly between all counties.

This utopian image is both ludicrous and bordering on the verge of the Twilight Zone, so Leitrim with a population smaller than Finglas should receive the same funding as the whole of Dublin, seriously that is just laughable and unsustainable.

Should the distribution of funds be looked at, certainly yes but it needs more sound suggestions for a solution than the above rubbish.

Another chestnut thrown into the money fire has been the subject of sponsorship Dublin takes in from AIG, again there are never comparison made to what the Kerry Group pay to sponsor the Kingdom or no mention of the multiple highly profitable fundraisers that take place in America for counties like Kerry and Mayo but hey again that doesn’t suit the money myth.

Again the plan is to intimate the sponsorship money from AIG goes solely to the Dublin senior football team to fund their backroom team. Nowhere does it state the fact that the AIG sponsorship which is about €800,000 a year is split among four codes not just men’s football. How that is split is unavailable but considering the figure it has to stretch a fair distance to fund the Dublin GAA, Dublin LGFA and Dublin Camogie.

Will end this piece talking about the Dublin team, when those of a blue persuasion counter the money excuse by claiming that the recent success is down to hard work by the club volunteers and the players and management those in the media and from around the country get their knickers in a twist and take it that it’s suggested that those in Dublin work harder than those in every other county.

Is that true?, that’s impossible to answer without knowing what other counties do or don’t do.

But here is what is known, under then manager Pat Gilroy the loss to Meath in the 2010 Leinster championship heralded a new playing system, in the winter months of that year every Sunday evening the squad headed to Clanna Gael Fontenoy to fine tune the new playing system.

This Sunday night gathering was their fifth or sixth training session of the week and it would be late on the Sunday night before the players pulled out of the car park to head home.

Was any other county team doing this, were they training five, six times a week, were their Sunday night’s a relaxing evening preparing for a new week ahead or were they out training and preparing their game plan for the new season.

That commitment, effort and hard work led to a first All Ireland title in 16 years and paved the way for this era of success, those long cold winter Sunday nights with a biting wind sweeping in from the coast and the other five or six sessions per week where the reasons for success not money received from the GAA.

A solid defensive system was bedded in and All Ireland title secured and Pat stepped aside a year later. Jim Gavin came in with the same hard work ethic and added more attacking flair to the mix and the rest as they say is history.

Those in the media and in counties all around the country know money isn’t the reason why Dublin are going for a five in-a-row of All Ireland titles and they know what needs to be done to get to the level required but until they give up the money excuse they will remain in Dublin’s slipstream.