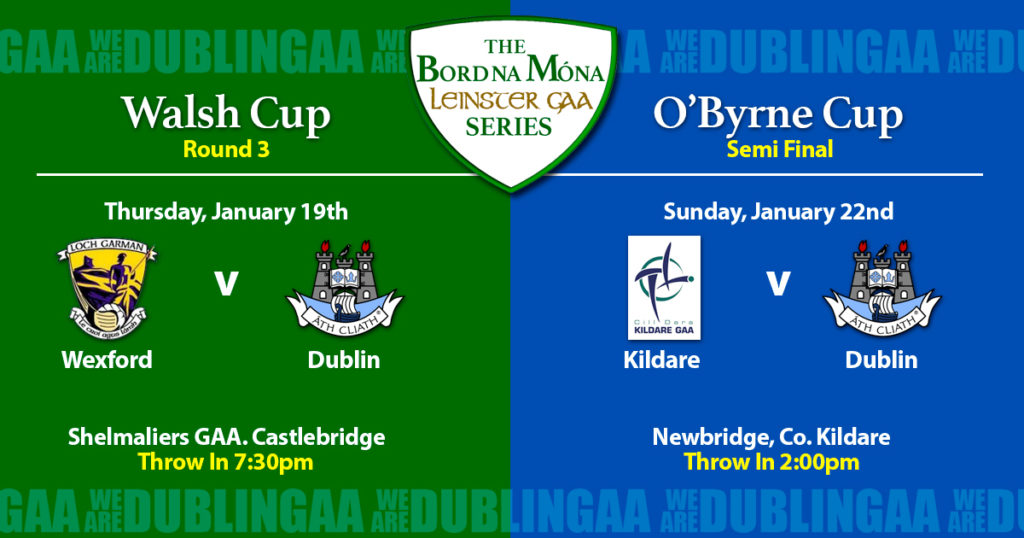 It’s an absolutely huge week for both Dublin’s Senior Hurlers and Footballers in the Bord Na Mona Leinster Competitions, with must win games for both sides.

Dublin travel to Enniscorthy this Thursday evening (7:30pm) for a huge clash against Wexford under new manager Davy Fitzgerald. With the winners of the game advancing to the semi final stages.

Cunningham will again rely heavily on the young players that are shining in this competition and will be expecting this to be their first real challenge as they battle for places on the panel for this year’s National League and beyond.

Fitzgerald has got his Wexford side off to a flyer, scoring five goals against UCD and another three against Carlow. With their scoring difference being +50 as opposed to Dublin’s +18, although they will be going all out for the win, a draw would be enough to see them advance on score difference, where a win is a must for Cunningham’s Dubs.

Throw in this Thursday evening in Shelmaliers, Castlebridge is 7:30pm.

After losing to UCD in Round 2, most expected this new young experimental Dublin side to find it hard against Wexford this past weekend. On top of that, with UCD performing so well in the first two rounds they were expected to welcome DCU to Belfield and win comfortably. But it’s always better when the outcome is not predictable.

Dublin overcame Wexford by 1-12 to 1-09, and with DCU surprisingly beating UCD 0-18 to 1-09, it opened the door for Paul Clarke’s Dublin side and a date with Group 2 winners Kildare in the semi-finals this Sunday in Newbridge.

Kildare are three for three in the group stages, and have scored eight goals across those games, they will provide a potent attacking threat for the Dublin defence to deal with this weekend.

So it’s all to play for and with potentially two games left for this young Dublin team before the return of the All Ireland Senior panel and boss Jim Gavin, there will be still time to impress.
Throw in this Sunday afternoon in Newbridge is 2:00pm

Two opportunities to see these two teams in Leinster Pre-Season action. Neither to be missed.