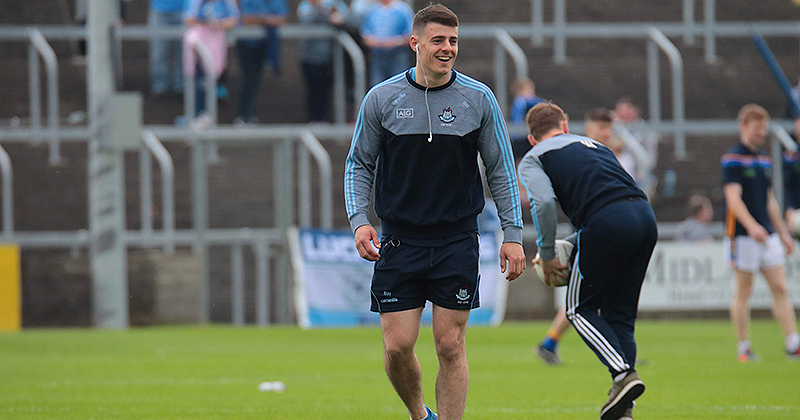 When current players hail the arrival of a new kid on the block it breeds expectation. Expectations that come sometimes with a vast amount of weight. And before the 2018 football season, one of Dublin’s greatest dropped the name of a young Raheny’s player.

Fast forward one year and the bold statement that held that expectation has delivered ten fold.

In an interview before the start of the last season, that brought League, Leinster and their fourth consecutive All Ireland to Dublin, Diarmuid Connolly mentioned one Brian Howard as a player that would eventually be one of Dublin’s greats.

And on the surface Brian appears to have everything you’d want in the ‘perfect’ footballer.

Powerful, highly skilled, with a vision of the game far beyond his years. Howard has cleanly inserted himself into the centre of Jim Gavin’s setup without the bat of an eyelid. Many players start a year off in pre-season only to drift to the rear as more established figures come to the fore. But not Brian.

The arrival of the young star culminated in him bagging his first All-Star. And he was only pipped at the finish for Young Player Of The Year by Kerry’s David Clifford.

Can he conjure up another brilliant year?

But what makes Brian Howard the player we’ve come to know in a short time. Diversity from a very young age. Pulling skills from the various sports he was involved in growing up.

Of course Brian was an avid hurler and footballer from an early age. Rugby and Soccer were also part of his make. And Basketball is something he had a big passion for in school.

“I haven’t picked it up in a while but I used to play it in school in St. Fintan’s (Sutton) and it is something I’d like to go back to.” he told GAA.ie

“You hear of a lot of teams now doing basketball training in the pre-season to get the hand-eye co-ordination and it has a massive effect. There’s a lot you can learn from basketball.”

To watch Howard approach a defender in the field of play and side step with ease. You’d think he’s four or five steps ahead in his thought process. But the player admits it’s thinking on your feet right in the moment.

“I don’t even know what I’m going to do. If the defender can read it, fair enough, but it was never something I worked specifically on. It was something that I always knew I had but I never know when I’m going to do it or use it up until the last second really, you’d look then and you’d be like, ‘Aw God, I got around someone.’

The Connolly seal is something to cherish

Harking back to Diarmuid Connolly’s comments before his arrival, his modesty shines through, and he admits something like that is great for your confidence.

“It helped because I knew going back to training that there were lads seeing something in me – Jim had me on the team and other lads were giving little heads up as well – ‘oh you’re doing very well at this or, you need to work harder at this.’”

“Obviously, Diarmuid is such a massive player in Gaelic over the last number of years, it was nice to hear from such an icon of the game, to hear that, not only does he know who you are, but also that he sees something in you.”

In recent years, players like Jack McCaffrey, Brian Fenton and more recently NIall Scully all shone very brightly in their debut year. Howard is no different. But with that accomplishment comes that expectation once again. But Brian’s work ethic hasn’t changed since his first training session with the Dubs. And the pressure doesn’t seem to bother him.

“At training you learn from all the senior members there and obviously the great management team. They help you prepare for everything.”

“The lads are so experienced that if you had any question about how to go about a game or deal with nerves, they can tell you all their methods to go about dealing with the pressure.”

“I just kept developing, getting more confident. And Jim Gavin, he’s a real man for if you’re playing well then you’ll get an opportunity, and, thankfully, I took mine when I went out against Kildare.”

THE LITTLE MUSEUM OF DUBLIN BRINGS HEFFO’S ARMY TO LIFE