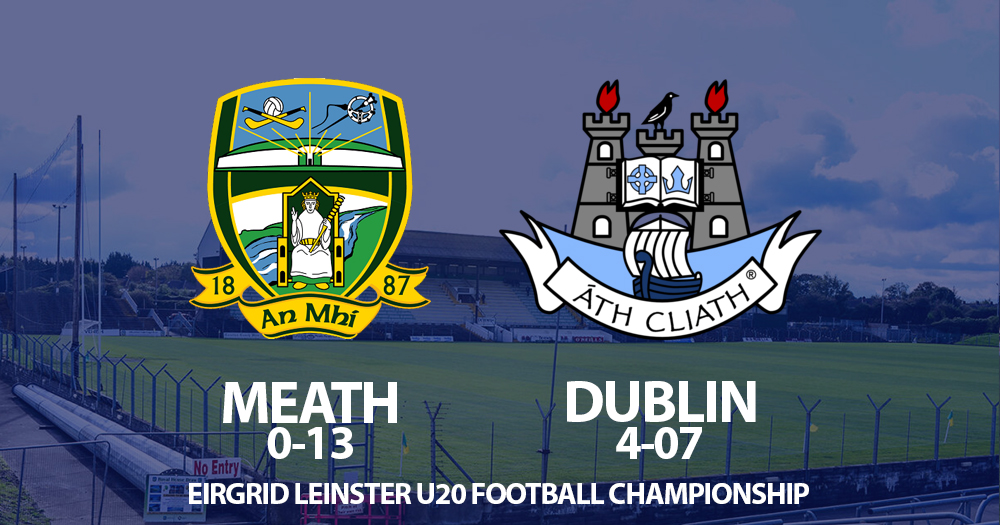 A couple of early second half goals were the decisive moments As Dublin advance to another Leinster Final with an impresive win over Meath in Pairc Tailteann.

The Dubs extended a half time six point lead with green flags from Mark Lavin and Loracn O’Dell. And despite Meath clawing back to within three points deep into additional time, Dublin hit a fourth goal to leave no doubt on the result.

A Lavin point got Dublin on the scoreboard in the opening minute. Luke Ward forced an impressive from Meath keeper Sean Brennan, with the resulting ’45 converted by Fionn Murray. Meath opened their account in the 7th minute with Diarmuid Moriarty finishing a good counter attack. But Dublin’s reply was more than emphatic. Three minutes later Luke Swan had registered their first goal. The Castleknock man pounced on a loose ball after Brennan had denied Luke Murphy-Guinan.

Murphy-Guinan got his revenge scoring from another parried Brennan ball, and a superb score from Lavin saw Dublin take a 1-04 to 0-01 lead. Meath went into defensive mode, but sadly couldn’t capitalise at the other end.

Fionn Murray eventually broke the deadlock, extending Dublin’s lead, but Luke Mitchell finished the half with a score for Meath making the half time score of 0-02 to 1-05.

Immediately after the restart, Mitchell continued the momentum for Meath converting another score. Jack Flynn added another after Colin Hawdon rattled the posts for Meath.

At this point Dublin registered their two rapid goals, but Niall Finnerty and Mitchell kept the board ticking for Meath. Murray could’ve chalked another goal for Dublin but Brennan tipped it over the bar.

Six successive for Meath from Mitchell (3), Moriarty (2) and Flynn saw Meath continue to press Dublin and close the gap to a 0-12 to 3-06 scoreline. But Lavin settled Dublin again converting a free before Moriarty made it a three point game in additional time. Dublin  sealed the deal four minutes into the added time when Adam Fearon reacted quickest to his own drive that came off the crossbar to find the net and send Dublin through.

Second Tier Football Championship To Be Introduced In 2020