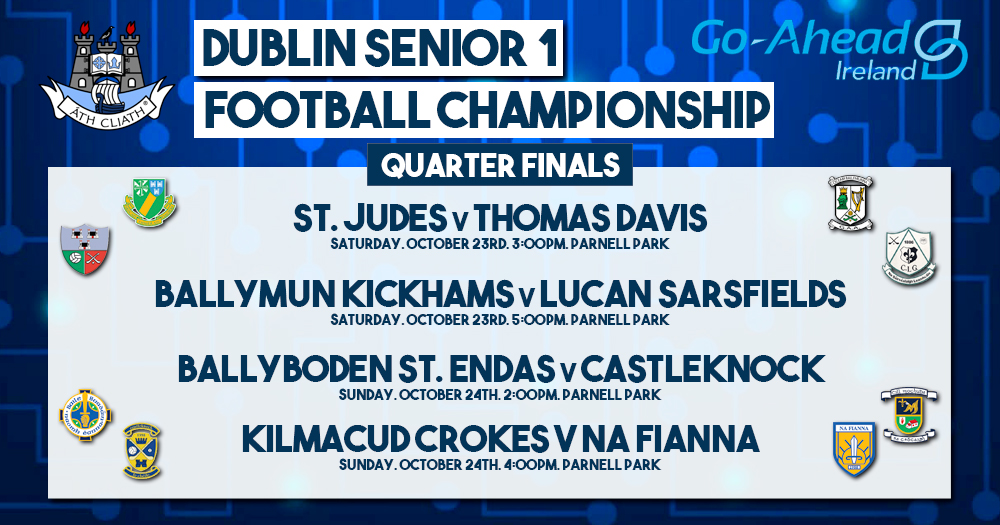 We’ve have week upon week of Championship action across football, hurling, ladies football and camogie. Last weekend the last four was decided in the Senior A Hurling Championship. And over tomorrow and Sunday the last eight wil battle it out to decide the semi finalists in thi years Go Ahead Senior 1 Football Championship. St. Judes, Thomas Davis, Ballymun Kickhams, Lucan Sarsfields, Ballyboden St. Endas, Castleknock, Kilmacud Crokes and Na Fianna will vie for their right to advance in the top flight competition.

The Group 4 competition saw St. Judes and Lucan Sarsfield deadlocked. After they could be seperated in Round 1 on a 1-14 a piece draw, they both scored victories over St. Oliver Plunkett Eoghan Ruadh and Round Towers Lusk to finish on 5 points each.

Judes will entertain Thomas Davis who finished behind Ballymun Kickhams in Group 3. After defeat to the reigning champs in Round 1, Thomas Davis saw off the challenge of Clontarf and Skerries Harps to secure the second Quarter Final slot of the Group.

Ballymun went unbeaten in Group 3, with the only dropped points in a Round 2 1-12 to 0-15 draw against Skerries Harps. But their wins over Thomas Davis and Clontarf saw them finish top. Their opponents Lucan got out of Group 4 on the same points as Judes so both these games will probably be decided by the bounce of a ball.

Ballyboden St. Endas topped Group 1 to advance to another Senior 1 Quarter Final. A Round 2 draw against Raheny was improved on with wins over Na Fianna and Whitehall Colmcille either side. They face Castlknock who earned their spot after a 2-15 to 0-12 playoff win over Baillinteer St. Johns last night.

Castleknock, Ballinteer and St. Vincents all finshed in a three way split in Group 2. Ballinteer had beaten Castleknock in Round 2, so the play off result will have pleased the Somerton side greatly.

Group 2 winners Kilmacud Crokes powered through the rounds beating Castleknock, Ballinteer and Vincents to finish clear leaders. Their opponents Na Fianna scored wins over Whitehall and Raheny to end as runners up in Group 1 behind Ballyboden.

We’ll be keeping a close eye on all four games and we’ll being you a update on all the action over Saturday and Sunday in the Go Ahead Dublin Senior 1 Football Quarter Finals.

PHILLY WILL LEAVE THE PREDICTIONS AND LIMELIGHT TO MCGREGOR