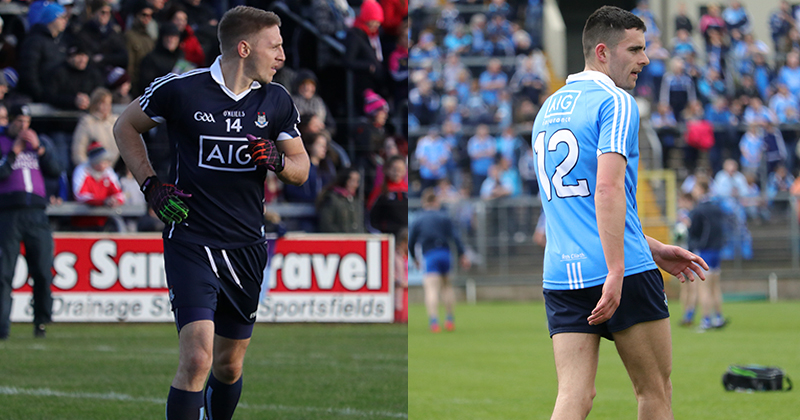 Eoghan O’Gara and Niall Scully have both been dismissed against Galway this year.

While no one is intentionally trying to ruffle the feathers of Galway football manager Kevin Walsh, he does seem to have taken exception to questions of his team in relation to the amount of opposition players who have been disciplined in their fixtures throughout the year so far.

And with Dublin preparing to meet the Tribesmen for the third time this season, it’s worth taking a look down the list that is growing as the weeks go on.

Over eight matches in this year’s Allianz National Football League, six opposition players were sent to the dressing rooms.

In Round 1, Tyrone Corner Forward Darren McCurry saw red after an off the ball incident with Eoghan Kerin. Mayo brothers Cillian and Diarmuid O’Connor were both sent off in their Round 3 clash in Pearse Stadium. Cillian received a straight red, again for a tackle on Kerin, and Diarmuid was shown a second yellow in very bad tempered ending.

In Round 5, just before half time Monaghan were awarded a free, but after he was fouled Fintan Kelly lashed out at Gary O’Donnell to receive a straight red and the free reversed.

Onto the Provincial Championship, and the Quarter Final against Mayo. Diarmuid O’Connor has the unenviable credit of being sent off twice against their neighbours. After only 28 minutes the Mayo forward raised his elbow while trying to run past Paul Conroy and floored the number 11 right in front of referee Conor Lane.

Granted they kept their bibs clean for the remaining two fixtures against Sligo and Roscommon, but once the Super 8’s got underway the pattern commenced again.

In the 60th minute of their victory over Kerry in Phase 1, Killian Young was shown a straight red for an incident only captured by an umpire. Kildare’s Daniel Flynn lashed out at his marker when they faced the Tribesmen in Phase 2. And of course this past weekend in their loss to Monaghan, the Farney lost Drew Wylie and Colin Walshe to second yellows late in the game.

So summing that up, it’s 11 red cards in 14 games over the league and Championship. It begs the question has it benefitted Galway in any way? Maybe only once. Back in March when they faced Monaghan in Round 5 of the League.

Heading to half time, Monaghan were in the driving seat, leading 0-07 to 0-05 before Fintan Kelly’s straight red. Galway took over after the break and eventually ran out winners by 0-04.

But that’s really the only time the Tribesmen have capitalised on the player deficit. They were leading by 0-02 in Salthill when O’Gara was sent off and needed a late equaliser to tie the game. And in the league final, they never took advantage of Dublin losing Scully. Instead of closing a two score gap and driving on they ended up losing by four.

While all the above is a deduction of the events during their 2018 season so far, it’s food for thought as Dublin look to get past them this weekend in their quest for four in a row.

Ciaran Whelan thanks Kilkenny and GAA stars for lockdown initiatives