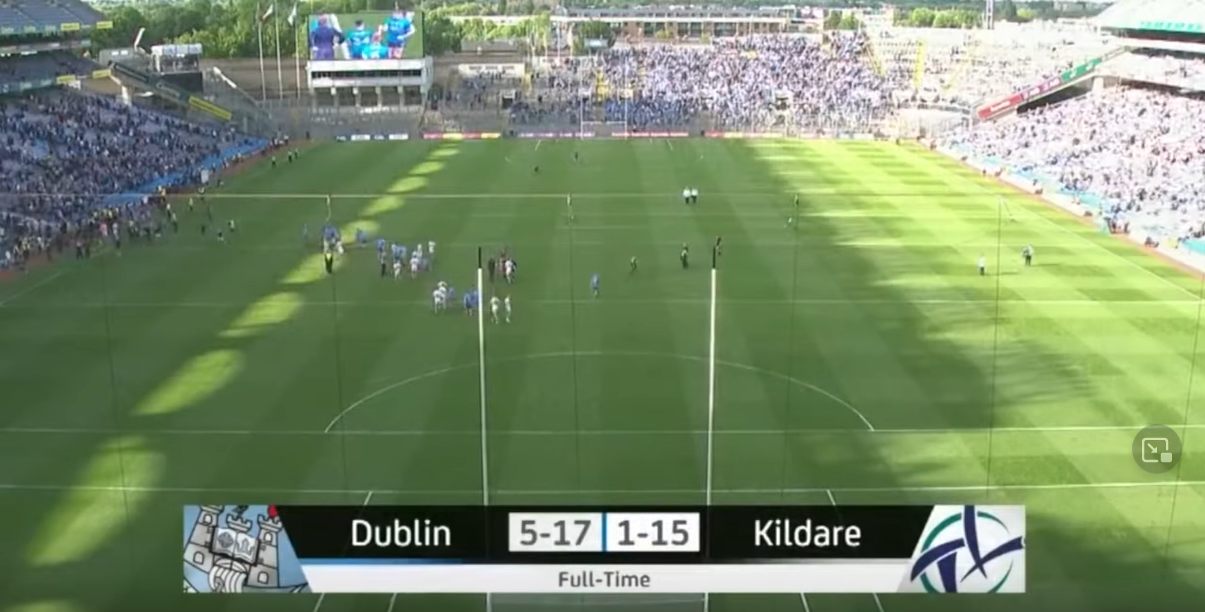 Doubts over Dublin’s demise seem to just melt away at every juncture since the conclusion of a disappointing National Football League campaign. And this evening was proof that Dessie Farrell’s Senior Footballers are in the reckoning to reclaim their beloved All Ireland Senior title.

The twelfth consecutive Leinster Football Crown looked like one of the easiest victories of the collection, but context is a wonderful thing. Many would have not read much into the provincial quarter final and semi final wins. And while there will be tougher tests ahead, today was a masterclass.

Ciaran Kilkenny, Cormac Costello, Con O’Callaghan and John Small all hit the net in the opening half, ending this fixture as a contest and gave Dublin room to take their foot off the gas on the restart.

Paul Cribbin punched the air with excitement scoring the opening point for Kildare, but the excitement was short lived as Dublin settled in early. After Dean Rock converted a free after O’Callaghan was fouled, the Cuala man played Kilkenny on to score the first of Dublin’s five green flags. Two minutes later a Rock attempt rebounded off the post and Costello was in a perfect position to gather it and rocket it into Mark Donnellan’s net.

The Whitehall man would do more damage in the 16th when Sean Bugler delivered a perfect pass. Costello dummied some attention to score his second. And while not getting on the scoresheet himself, Bugler played the assists perfectly, feeding John Small for his bullet that Donnellan could never have stopped.

O’Callaghan, who picked up today’s Player Of The Match Award, finally bagged his goal on 27 minutes. Eoin Murchan kicked a pass to Costello, who again fooled his marker and despatched to O’Callaghan who finished comfortably.

With 0-16 advantage at the break, there really wasn’t any need for Dublin to over exert themselves on the restart, and with that Kildare enjoyed some more possession and worked to make the scoreline a little less one sided. Having only scored 0-06 in the first, they chipped away slowly. But Dublin for the most part had a comfortable response each time. Jimmy Hyland grabbed a consolation goal for the Lillies, palming the ball past Evan Comerford.

The result saw James McCarthy raise the Delaney Cup aloft on the Hogan stand, giving Dublin a 12th Leinster Crown in a row. That sends them into the All Ireland Quarter Finals on June 25th. Kildare now head for the Qualifiers in 2 weeks to face a Round 1 winner.