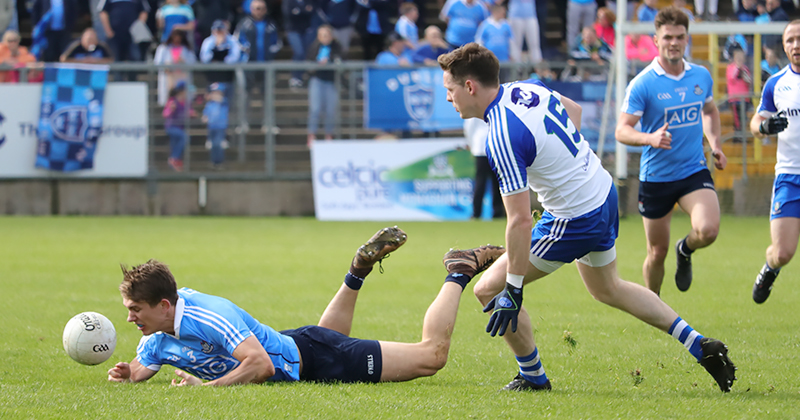 As Dublin’s Senior Footballers aim for their sixth straight Leinster Championship next month, it’s time for boss Jim Gavin to reflect on their league form in the hope of building yet another panel who will be eager for more success.

On occasion during the Allianz League campaign, supporters may have felt left wanting. But while a few teams tried to put Dublin under the cosh, all but Kerry failed to drive it over the line.

Kerry’s victory over the Dubs in the League final is one that might necessitate reflection, certainly from defender Michael Fitzsimons. In the dying phase, with Dublin only trailing by a solitary point, the Cuala club man took possession and was at full pelt through the midfield. Surely the equaliser was on, either for himself or at least a waiting forward.

But Kerry’s Anthony Maher had other ideas, grabbing a handful of jersey and pulling Fitzsimons to the ground. The cynical foul rightly warranted a Black Card for Maher, leaving Dean Rock to step up for a long range free that could have sent the match to extra time.

Unfortunately the distance proved too far for Rock to channel his usual accuracy and the ball struck the upright, as the referee instantly blew the final whistle.

Speaking at the launch of the AIG Heroes Initiative this week Michael admits that he won’t dwell too long on the tackle or the missed free or what might have been.

“You have to look at our overall performance.” he told the Irish Times.

“If you look back on it, our kicking could have been better.”

“My shooting isn’t the best, as you could see from the All-Ireland final, and I didn’t get much chance. The ball had bounced about four yards away from me, and looking back on it, I think I was running into traffic.”

And his opinion on the Black Card in general?

“The black card plays on players’ minds. They are not going to be pulling people down. Obviously it takes a while for players to get used to and everyone to get used to it, but I would definitely think twice about pulling someone down.”

“If someone does a cynical foul in the last play of a game it is going to be the same. I think the black card has been effective. The sin bin might be more of a penalty, but the way it is, it stops you making fouls.”

Despite being last year’s All Ireland Final Player Of The Match, landing a position in Dublin’s starting 15 has never been something Michael has taken for granted.

He was a first choice in 2010 when Dublin were stunned by Meath in the Leinster Championship. the following year he landed the corner back position in the All Ireland Final victory against Kerry.

A year later Fitzsimons had lost his place. And injury laid him out for a spell and by the time Jim Gavin succeeded Pat Gilroy as Dublin manager, the Cuala man was back to earning his place again. And while he scraped and clawed game time in 2013, he sadly didn’t feature at all in the All Ireland winning final.

But not featuring regularly clearly hasn’t stunted Michael’s game and he thrives on any and all chances he gets to run out for Dublin.

“I know last year I only played five minutes against Kerry but really enjoyed my part in that. And the same with Mayo 2015. I didn’t start that game either, and they were some of the best games I played.”

“A lot of lads are taking great satisfaction out of a team performance, whether it’s five, 10 minutes. That can be as sweet as a full game.

YOU HAVE TO SOMETIMES BOW TO GREATNESS AND SUPERIORITY – SEAN...

THEY’LL COME BACK AS STRONG AS EVER – GAVIN