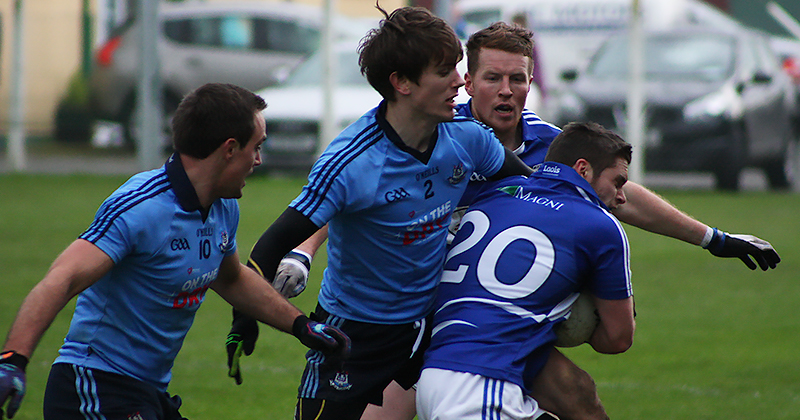 It’s not every day someone can be given the accolade of Player Of The Match in an All Ireland Final. Footballers, both men and women, Hurlers and Camogie players alike strive to be the best in the most competitive of sports. And in Dublin, with competition for inter county places from a huge number of clubs, some may never get the chance.

But some never give up. Last year, Dublin’s Michael Fitzsimons stepped into the spotlight and put in the performance of his inter county career as Dublin won their second All Ireland title on the bounce. And was rightfully named as the Player Of The Match in the replayed All Ireland Final against Mayo.

Fitzsimons played through the years never making it into any underage Dublin panels. He did however win Leinster and All Ireland Junior Football titles in 2008. In 2011 he became a more familiar face in the Dublin Senior set up, winning a Leinster title and his first All Ireland medal. Luckily for Michael he now has four in total but has never stamped his ownership on a consistent starting 15 place in the panel.

But this is the story for a lot of players trying to break into such a strong and varied panel. And it must be hard on a players mindset trying to stay involved and focused.

“I’ve actually been through it since sort of 2012 and 2013 onwards where it’s been ups and downs in my season so I’ve actually learned a lot.” Fitzsimons told the42.ie this week.

“You go through a range of emotions; frustration, anger but when you face reality and what it is, you have to face it.”

The Cuala club man spent a lot of time putting pressure on himself, changing his game, and as a result was causing himself to be inconsistent. And he admits that’s an easy trap to fall into when you’re not starting week in week out on a regular basis. But Fitzsimons has turned this around and has much less self doubt in his ability and is more driven than ever to push and fight for his place in the Dublin panel in 2017.

“I think I’m beyond self-doubt at the moment.”

“I think I’m mature enough not to fall down that pathway but it does drive you on.”

“From now on I sort of trust my own ability, trust the way I play and have a bit more patience.”

With Michael in his second year of medicine in UCD it will be hard to keep the momentum going but he’s as determined as ever to win a spot in Jim Gavin’s starting team.

“Everyone is pushing for a spot and that drives up standards.”

“The nature of the group is, no-one is going to rest on their laurels. There’s huge competition. People, in a good way, are looking over their shoulder, knowing they have to work hard.”