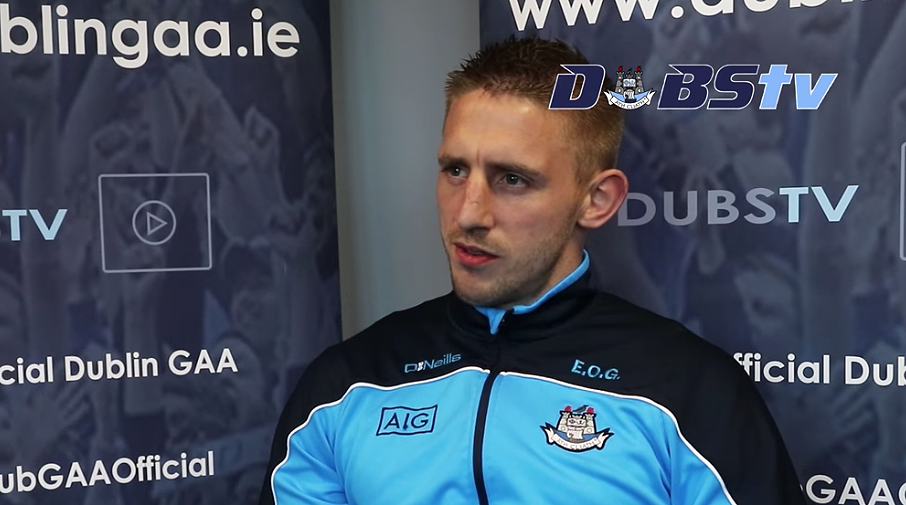 Templogue Synge Street’s Eoghan O’Gara has given Dublin fans many memories over the years for many many reasons. Since his debut in 2008 the Synge Street man became a terrace singers dream. Few will forget the crowd in Nowlan Park at the 2016 Leinster Quarter Final against Laois. The day they roared his name to the tune of The White Stripes “Seven Nation Army”.

O’Gara was plagued with injuries over the years. But always made himself available to Paul Caffrey, Pat Gilroy and Jim Gavin as the years passed. He enjoyed his best season in 2010 partnering Bernard Brogan in attack. He was used very effectively as an impact sub in the 2011 and 2012 seasons. And that carried into Jim Gavin’s reign in 2013.

In March 2015 O’Gara ruptured his ACL, forcing him again to miss a long period of action. On his return, opportunities to start were indeed limited. But it never made his passion for football and the blue jersey wain.

“I have spent 11 years living out my dreams as a kid growing up in this great city. As I call an end to what has been the most phenomenal experience of my life I would like to thank the following:

My parents and my nine siblings. For shaping me and giving me the burning desire to never give up on that dream.

To My extended family for the constant unwavering support.

My club Templeogue Synge Street. For their never-ending support and guidance from so many generous and selfless people along the way since I was eight-years-old. Joe O’Reilly, Philip Murphy and the late Vincent Walsh who mentored me and gave me the grá for Gaelic football and belief in myself.

To ‘The Blue Panther’ Anton O’Toole, a man who inspired me and showed me the way to the top via my actions, not my words. A man who embodied all the values a sportsperson and a person should have. To get to follow in his footsteps and then share the field with my club-mates Denis and Niall in a blue jersey was an absolute honour and privilege.

To my partner Elaine for all the many sacrifices. Putting her life on hold and giving me whatever time and space I ever needed to chase that dream and for putting up with me along the way. Thank you. My two beautiful daughters, Ella and Fiadh, who kept me motivated and for always having my back and making me smile.

To ‘Pillar’, Pat Gilroy and Jim Gavin who all had faith in me and helped me improve as a player and a person and whose love for Dublin GAA was infectious.

To every member of the Dublin senior football management and medical team during my time who always went beyond the call of duty whenever required.

Thanks to the many passionate and loyal Dublin supporters who always made their presence felt hail, rain or shine and whose pride in us always added extra motivation.

The people I have shared it with, and the experiences I have shared with them, have made me a better person and given me the tools to grow more than I ever thought possible. Some of the best people you could ever wish to meet.

To every one of my team-mates past and present, the brothers and family I was lucky to spend so much time with and to get to know and go to battle with. Men, characters and leaders of the very highest calibre. There aren’t words to describe my gratitude and love for you. Some great friends I hope to keep for a very long time.”