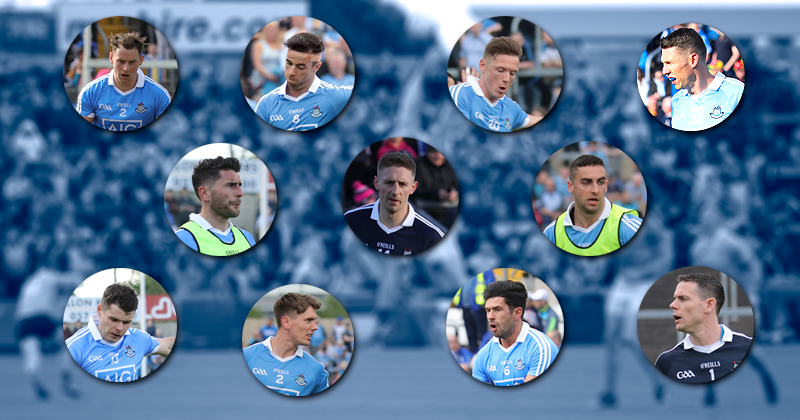 Dublin arrive on Sunday with Eleven Players battling for a sixth All Ireland Medal.

It would have been hard to imagine all the way back in 2011. After Bryan Cullen lifted Sam Maguire aloft, we’d be looking towards this weekend and Dublin’s sixth All Ireland Football Final appearance. And when you consider the baron gap from 1995, it really does become more unfathomable.

But by 2015, heads were starting to turn and people began to see Jim Gavin’s plan unfold. In his first face to face with the media, Gavin was quick to voice his ambitions of winning three All Ireland’s in three years. Plans were slightly derailed in 2014 by Donegal, but it was certainly the catalyst for Dublin to evolve and improve.

Evolve they did. Gavin has introduced fresh meat regularly, feeding off the huge talent Dessie Farrell had nurtured at U21 level. One thing that’s apparent is the desire for almost every member of the panel to want to stay around for the long haul. To absorb and be a part of this extraordinary and unprecedented journey in Dublin Football.

The evolution of Gavin’s Panel

Of course new voices and new leaders have come to the fore. We’ve watched players like Kilkenny, Fenton, Cooper, McCaffrey and Rock grown into established starters. Behind them Lowndes, Howard, Scully, Comerford, Murchan and O’Callaghan are all getting well used to life in the spotlight.

But looking deeper, Jim Gavin has done an amazing job introducing new blood while still maintaining the interest of key players. They were there before he arrived, and some will probably still be there when he finally decides to call it a day.

The Five Time Elite who are looking for six

This weekend as many as eleven Dublin players will be hoping to get their hands on their sixth medal. And the first three listed have had the honour of starting the previous five finals.

The epitome of goalkeeping, and for us still streets ahead of anyone else in the game. His 2011 free kick in the dying seconds against Kerry will be forever etched into fans memories for years to come. He started off this era in style and has barely missed a beat since. The idea of Stephen lifting Sam Maguire aloft as captain for a fifth time and receiving his sixth celtic cross is nothing short of amazing.

Cian has seen it all and done it all for Dublin. And has the scars to prove it. Once a midfield cohort alongside Michael Darragh Macauley, Cian is now a formidable sweeper. He’s had a few nasty knocks over the years but has never stayed down for too long! A player Jim Gavin has said on many occasions he is fortunate to work with. You could put your house on Cian lining out from throw in this Sunday.

James missed out on being named the 2017 GAA/GPA Player of the Year to Mayo’s Andy Moran. But that hasn’t slowed the Ballymun Kickhams star down in any way. His second half goal against Tyrone in the Super 8 clash is a shining example of his pace, power and determination when bearing down on goal. You can be sure James will once again be pivotal in the managers plans against Mickey Harte’s men.

Mick still remains one of Dublin’s best in the Full Back line. Since the departure of Rory O’Carroll has shared the limelight with Philly McMahon and Jonny Cooper for some unbelievable defensive displays. He may have seen some competition from the young Eoin Murchan of late. But when Eoin struggled against Ian Burke against Galway in the Semi Final, it was Fitzsimons who was despatched to clean up the danger. His Player Of The Match performance in the 2016 All Ireland against Mayo still stands out as his best in a Dublin jersey.

The Ballyboden man has come out of the traps this year. And has surprised a lot of people who maybe thought he was done. All that may be down to finally being free of carrying injuries. He’s be a more than satisfactory partner to Brian Fenton in the middle of the park.

This year Paul appointed new CEO of The Gaelic Players Association, while continuing to fight for a place on the Dublin panel. The four time All Star has played a pivotal role in Dublin’s success since their first All Ireland this decade. Like O’Sullivan, Paul has been unfortunate many times to have injuries hamper his opportunities in a Dublin jersey but he always manages to get back on track. Recent introduction as a substitute this year has seen him play a vital role in Dublin’s drive for their fourth consecutive All Ireland. And he certainly hasn’t hung up his scoring boots just yet.

If he were to walk away tomorrow, Bernard would owe nothing to the Dublin team or their army of fans. The Oliver Plunkett Eoghan Ruadh man has served his time well since his arrival to Championship action in 2007, receiving four All Star Awards, along with the 2010 Player Of The Year and the 2013 All Ireland Final Player Of The Match. But that in itself is just a small snapshot of his achievements as a Dublin Player. Many believed Bernard would sign off at the end of last year, but didn’t. And this year, Brogan has recovered from major surgery to again vie for a place in another All Ireland Final.

Two goals against Roscommon in the third phase of the Super 8’s only proves that the Templeogue Synge Street man still has an eye for scores. His name is still sang on terraces around the country, reaching an iconic status among Dublin fans, who at one time loved to hate him. A player who always play on the edge, but still has a serious purpose when the going get’s tough. Eoghan has hung around while others have moved on.

Philly started life as a bit part and has grown into an established starter over the years. His performances in the recent All Ireland Final games against Mayo and Kerry have seen the Ballymun man as a thorn in the side. The likes of Aidan O’Shea and Kieran Donaghy completely nullified. And the special thing about Philly is his ability to convert defence into attack with his love of advancing forward. If anyone deserves a sixth All Ireland Medal, it’s Philly.

The Judes man should go down in history as the greatest impact substitute Dublin have ever had in their arsenal. It’s no secret that Kevin would rather be a starter than a sub, but there are too many times he’s entered the field for Dublin and turned a game on it’s head. In 2011 he “sent Dublin Fans into rapture” with his goal in the 64th minute against Kerry. He did it again in 2013 in the Semi Final against the Kingdom. And for those two occasions alone, Kevin has won the hearts of every Dublin fan. There’s no greater feeling that hearing his name announced over the speaker system in Croke Park.

Darren has probably seen more game time this year than he has in a while but let’s not forget the Fingal Ravens man is a loyal and dedicated member of the Dublin panel. He may not make headlines, but he’s been there anytime Jim Gavin has called on him. A more than adaptable player, Daly has slipped into many roles over the years, and has been a difference maker coming off the bench as fresh legs on many occasions. There’s a very good reason why he’s accumulated five medals already.