Kildare’s good fortune continued tonight as their U20 side claimed the spoils in this inaugural Leinster Football Championship as they outclassed Tom Gray’s Dublin panel all over the Tullamore pitch.

In a massively dominant performance, corner forward Jimmy Hyland’s 0-08 haul was the difference between the sides at full time, but that only tells half the story as Dublin’s full forward line were stifled for possession, making it difficult for the boys in blue to impact the scoreline. And a crucial save by keeper Aaron O’Neill was certainly a turning point in the 25th, denying Tom Keane to what could have been the turning point Dublin badly needed.

Dublin definitely got off the better start, with Cormac Howley scoring a wonderful point within 30 seconds. It took until the fourth minute for Hyland to level the game up, with Kildare playing with a deceptively strong wind, but neither side were playing to their full potential compared to their respective performances against Meath and Offaly only a week ago.

Despite using their initial possession well, Dublin never capitalised on James Madden’s pace, thanks to the guarding job of Jack Bambrick for Kildare. Ross McGarry put Dublin’s second over in the eight, but Paddy Woodgate equalised again. Sean Bugler and Hyland exchanged scores before James Doran and Bugler put Dublin 0-02 in front.

Hyland added another for Kildare before Tom Keane was denied his goal, which swung the pendulum back to Kildare as Tony Archibald, Hyland (2), Padraic Nash (2) and Brian McLoughlin all put scores over to go 0-06 unanswered and give the Lillies a five score cushion going into the break.

Kildare controlled possession immediately at the second half whistle, and despite early scores from Tom Keane and Ross McGarry, Kildare were always able to reply and maintained their five-point lead. The men in white held Dublin scoreless for the middle third of the half and registered two scores of their own, forcing Dublin to aim for green flags to get back in the game. Tome Keane again was denied from 15 metres out as his shot was partially blocked and ended up over the bar.

The last nail in the coffin came at the end of normal time as a foul on Hyland allowed Kildare to crown their win with a penalty goal from Tony Archbold, perfectly placed into the top corner, and while Sean Bugler and Tome Keane closed the game with the final two scores, Dublin couldn’t deny the comprehensive manner of Kildare capturing the title. 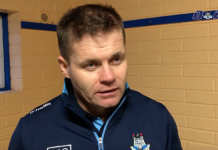 ALL IRELAND TO BE DECIDED BY THE KICK-OUT BATTLE AND STRENGTH...