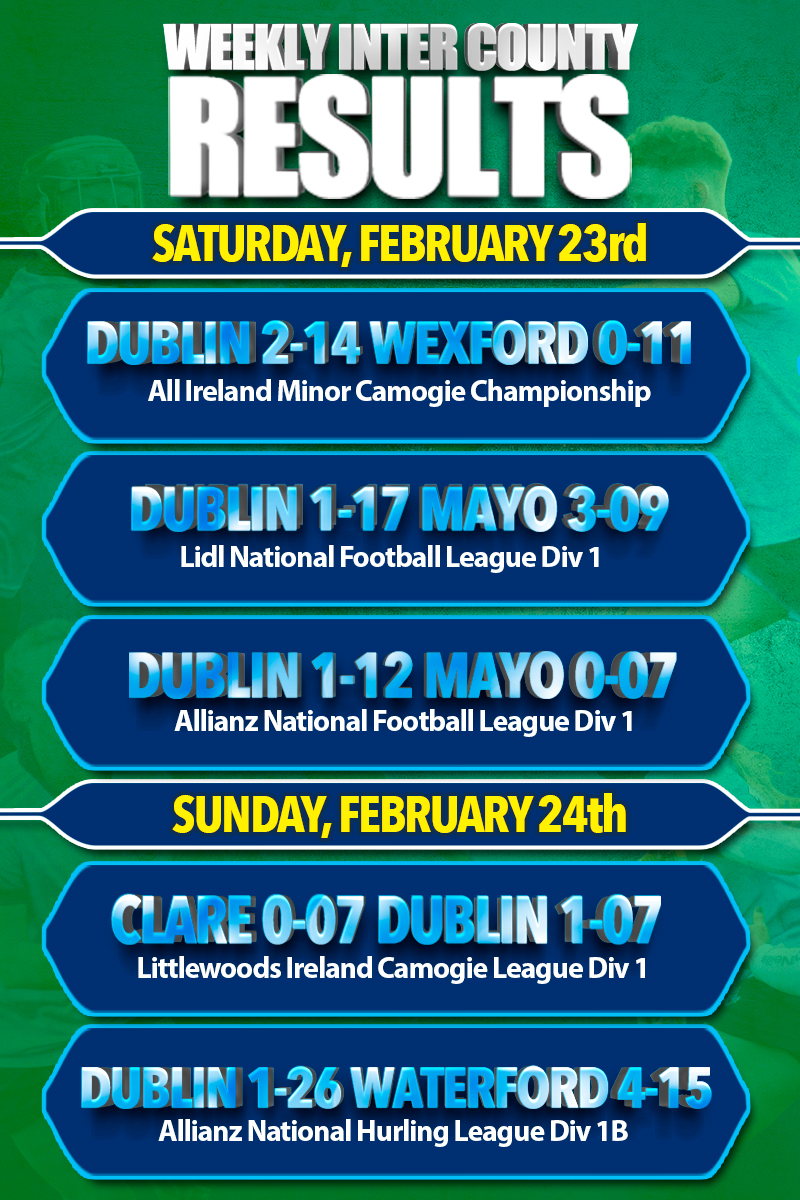 What a cracking weekend. No losses to report across the five games covered over yesterday and today. Even the Derry umpire who got speared during last night’s League clash between Dublin and Mayo is on the mend. We’ve plenty to talk about. So let’s get started.

The Dublin Camogie Minors started off their All Ireland Minor A Championship campaign with an impressive win over Wexford. A dominant start to the game saw Dublin race into a 1-05 to no score lead inside the opening quarter. By half time the Dublin led by eight points and Wexford had it all to do in the second half.

Another lightning start to the second half finished the game as a contest. Wexford gamely battled till the full time whistle. But could never get close enough on the scoreboard to put any pressure on Willie Braine’s side.

Dublin moved to the summit of the Lidl National Football League table with an impressive victory over Mayo. St Sylvester’s forward Niamh McEvoy ended the contest with an impressive personal haul of 1-5 and was instrumental in steering the Metropolitans towards a second consecutive top-flight triumph.

Trailing by six points after 20 minutes, Mick Bohan’s charges slowly reeled in their Connacht rivals. The early introductions of Siobhan Killeen and Jennifer Dunne – Player of the Year Sinead Aherne followed in the second half – added an extra spark to the Dublin play, and they helped to reduce their deficit to 3-4 to 1-6 at the interval.

Dublin lost Niamh Collins to the sin bin for 10 minutes in the second half, but the resulting penalty was blasted over to minimise the damage. The returning Aherne and McEvoy edged Dublin in front for the first time with consecutive frees, before Doherty’s two-point salvo levelled matters moving into the home stretch.

Dublin never panicked though, and McEvoy and Davey raised white flags in the dying moments to see off the Mayo challenge.

Cormac Costello, not for the first time this year, put in a fantastic all round performance. The Whitehall man added another 1-04 to his ever growing personal tally as Dublin ran riot over their western rivals right from the throw in. And what’s more important is Dublin are back in the race for a League Final position, with games against Roscommon, Tyrone and Cavan remaining.

The Dublin manager called up the experienced Cian O’Sullivan and Ciaran Kilkenny as last minute replacements for James McCarthy and Dean Rock before throw. And giving them their first taste of inter county action this year paid off, particularly for O’Sullivan who was solid for the entire 70 plus minutes.

Dublin made sure of their top-flight status with a 1-7 to 0-7 victory over Clare at Cusack Park. Frank Browne’s troops led by a point at the interval (0-5 to 0-4) with Sinéad Wylde, Orla Beagan and Aoibhe Dillon on target for the visitors, and Chloe Morey hitting three of the home team’s points.

Aisling Maher’s goal four minutes after the restart opened up the vital gap and with Clare only able to add three points in the second half via Morey’s hurley, the win was Dublin’s. The girls in blue have had great spells of play throughout their campaign against Kilkenny, Offaly and Limerick. And today puts a shine on the league for them snatching a must deserved win.

After the weekend’s results, Kilkenny, Cork, Galway and Limerick will contest the Division 1 Semi Finals, while Wexford and Offaly will play out the relegation battle to determine who will remain safe for another season.

For Dublin, they ended their campaign in third position in Group 1 just 1 point above Clare, with Offaly finishing at the bottom.

Without a shadow of a doubt, the Dublin Senior Hurlers put in their finest team performance of the Mattie Kenny era this afternoon, stopping Waterford’s 100% League record in front of a highly vocal crowd in Donnycarney. Oisin O’Rorke’s last minute inclusion in the starting line up proved a positive step as the Kilmacud Crokes man scored 0-11 of Dublin’s 1-26 in game that quite literally had everything.

O’Rorke bagged Dublin’s last four scores, coming from a point down at the 70 minute mark to steal the game by two scores. And in a controversial twist at the very end of the game, Darragh O’Connell received his marching order for what the referee deemed was a deliberate foul on Thomas Walsh. Initially a yellow card was brandished by Fergal Horan and a penalty awarded. But after a consultation with his umpire, Horan returned and produced the red card, much to the disillusion and anger of the home support. However Alan Nolan stepped up for his side, saving the Stephen Bennet strike to secure the win.

Let’s have more weekends like this one. Next week we have five more games to enjoy. On Saturday Dublin’s Intermediate Camogie side will make the trip to Laois for their next League Division2 clash. On Sunday Dublin’s U16 Ladies Footballers start their Leinster Championship campaign with a home tie against Longford. The Dublin Senior Ladies are at home to Westmeath in the next round of the Lidl National Football League. Dublin Senior Footballers travel to Dr. Hyde Park for the next encounter in the National Football League. And finally Dublin’s Senior Hurlers end their Division 1B campaign with a home tie against Laois.