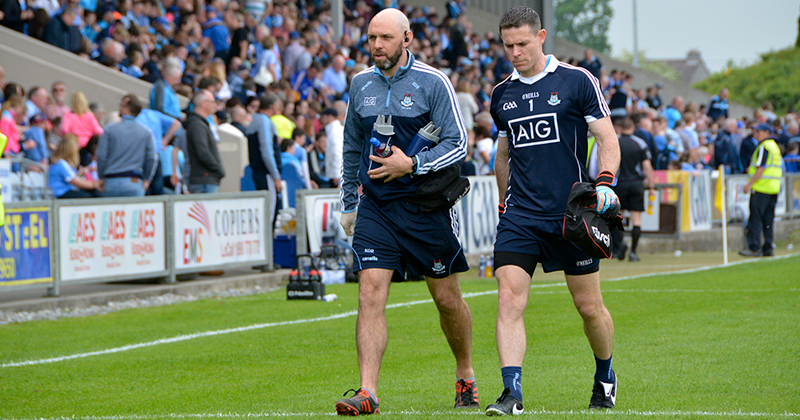 Keeper Stephen Cluxton was forced out of the game after a nasty late tackle in the first half.

Jim Gavin’s Senior Footballers successfully traversed the Leinster Semi Final landscape by comfortably seeing off the challenge of Longford this afternoon to set up a Provincial Final clash with Laois in two weeks time.

But the game was slightly marred by a serious incident after 20 minutes when Longford full forward James McGivney clashed with Cluxton in front of goal with a reckless challenge, forcing referee Maurice Deegan to issue a straight red card for the tackle.

It was quite apparent that the challenge had left the Dublin keeper shook, needing treatment from the sideline before being forced off the pitch.

This really was despicable. Has a look, spots Cluxton, then sets out to hurt him. pic.twitter.com/mqCLyrzbgE

Dublin’s Number 2 net minder Evan Comerford was announced over the Croke Park PA system as a temporary substitution for Cluxton, which would have been recorded in the referees’ notes.

A temporary sub is used generally if a player needs treatment for a blood injury and would normally be known as a blood sub. And while there was no visible signs of blood on Stephen, the medical team would have been concerned about a head or neck injury based on the impact of the tackle.

With a temporary sub, there is no stipulation in the rule book that states a player must return to action after a certain period, therefore the substitution remains temporary for the duration of the game, provided it’s recorded by the referee.

As such this was outside of Dublin’s allocation of six normal substitutions during today’s game and as a result, they were able to bring on Darren Daly, Jack McCaffrey, Kevin McManamon, Colm Basquel. Cian O’Sullivan and Paul Flynn, as well as Comerford.

In last year’s All Ireland Round 1 Qualifier between Sligo and Antrim, a similar situation occured when Sligo used all six substitution and one temporary substitution. And just like Cluxton today, the player never re-appeared for action.

Meanwhile it is being reported that Stephen Cluxton has had to visit the Accident and Emergency department of the Mater Hospital in Dublin, but probably more as a precaution following the tackle from McGivney.