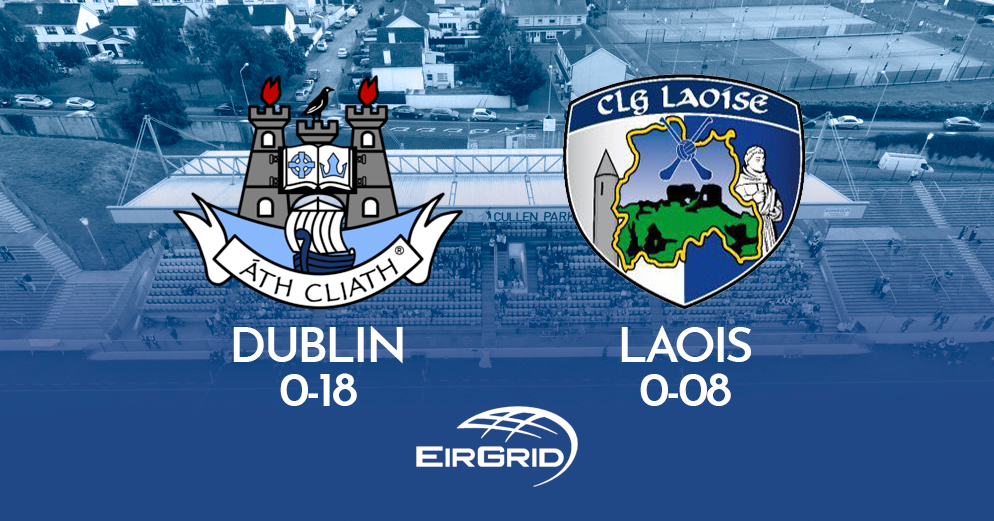 For the second year in a row, Dublin have been crowned the EirGrid U20 Leinster Championship kings after a strong shift against Laois tonight in Netwatch Cullen Park.

After a slower start Dublin ran out the first half at 0-11 to 0-05. And they outscored Laois after the break by 0-07 to 0-03. And it came as no surprise that once again last year’s EirGrid Footballer of the Year Ciaran Archer lead the charge for Dublin scoring 0-07.

Laois had the quicker start and in under 4 minutes had got out to a 0-03 to 0-00 lead. Ronan Coffey and goalkeeper Matthew Byron finding the target from dead balls. Dublin however were level seven minutes later, thanks in part to two very special Lee Gannon scores.

Another score for either side before Dublin went on a seven score unanswered spell up to the 27th minute. Archer bagged three of those scores, with Mark Lavin and Sean Foran also picking up white flags. With a converted ’45 Archer ended the half with Dublin six points the better off. And it could have been worse for Laois as Kieran McKeown saw his shot blocked by Byron in the goal, and Alan Murphy struck the bar with his attempt.

Coffey found the target for Laois at the beginning of the second session, but it would be one of only three score Laois would register. They had the perfect goal opportunity when awarded a penalty by the referee. But Mark Barry pulled his shot wide of the goal despite Josh O’Neill having it covered.

Laois certainly enjoyed a lot of possession, but the Dublin defence was rock solid, breaking down attack after attack. McKeown scored some clinical scores through the half hour to ensure Dublin had done more than enough to secure the win and head for the Netwatch Cullen Park stand for the presentation.

Dublin will face either Tyrone or Donegal in the All Ireland Semi Final on St. Patrick’s Day.