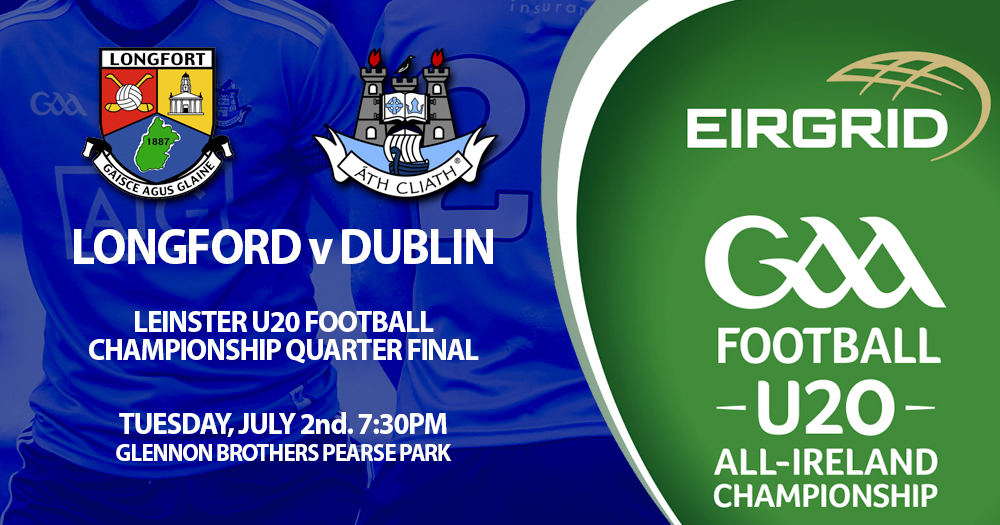 A trip to Longford again for the Dublin U20s as they revisit the venue that got Dublin it’s first win of this new grade. Longford were Dublin’s opening Round opponents in last year’s football competition, with Dublin leaving Pearse Park the victors by 2-21 to 0-11.

This year competition has seen Laois beat Kildare to set up a Quarter Final against Westmeath. In the second opener Offaly were victorious over Carlow to book a last eight slot against Meath. And Wexford beat Wicklow in Bellefield last week to advance to a Quarter Final against Louth. Those three games, along with Dublin’s clash with Longford all throw in tomorrow night in a quick turnaround competition.

After Dublin’s victory over Longford last year, they saw off the challenge of Westmeath by 2-16 to 1-13. They then took a trip south east to register their third round win over Wexford. That 1-15 to 0-11 result saw them unbeaten in the rounds and into a tasty semi final with Meath. And in that last four clash the Dubs picked apart their opponents by 4-16 to 2-10.

They came up against a Kildare side in the provincial and lost by 1-15 to 0-10. But that Kildare side went on to win the All Ireland title.

In preperation for this year’s provincial competition, Dublin competed recently in the John Kerins Cup. It’s an U20 development and an opportunity for teams to get additional game time, with the provincial and All Ireland competitions being so short.

The Dubs, under the manager Tom Gray, were grouped with Galway, Cork, Kerry and Kildare. In their opening game they enjoyed a 2-14 to 0-14 win over Kildare. With two crucial goals, Dublin had a 2-08 to 0-02 lead inside 22 minutes. Ciaran Archer, a substitute in last year’s game against Longford, finished as Dublin’s top scorer with 1-06, with Niall O’Leary raising the other green flag.

A draw would be the outcome of Dublin’s second game against Cork with both sides finishing 1-18 each at Laois Centre Of Excellence. And the boys in blue were edged out in game three against Kerry with the men from the kingdom finished 1-07 to 0-07 winners.

Dublin finished the John Kerins competition with 2-17 to 1-07 loss to a more than impressive Galway side in Ballinasloe.

DUBLIN WILL FACE WESTMEATH IN THE LEINSTER U21 FOOTBALL QUARTER FINAL