Two losses in three game seriously tested Dublin’s resolve. But there’s not person out there that can question their solid and unwavering response. Jim Gavin’s panel proved too strong for Mayo  before soaking up a gutsy Roscommon challenge in their last game out. All of a sudden Dublin are placed second in the League standings. And with two wins from the remaining fixtures they’ll likely earn a spot in the final.

Along the way Jim Gavin has afforded some emerging players opportunities to shine. Most notably Darren Gavin who is settling in well. But Tyrone will be coming back to make a statement at GAA headquarters. Losses to Kerry and Mayo had Tyrone in a bit of bother, but after scrambling a draw against Roscommon, Tyrone have registered a couple of victories meaning they’ll hit Croke Park with their tales up.

Mickey Harte has kept faith with the team that defeated Cavan for tonight’s clash with the League Champions. It sees Cathal McShane and Richie Donnelly remain at midfield, while Peter Harte, the scorer of 1-3 in the victory over over the Breffni men a fortnight ago, is again named to start at full-f0rward.

After making a return against Roscommon, Stephen Cluxton again makes way for Evan Comerford to be given more valuable game time. John Small and Brian Howard return to the side in place of Jack McCaffrey and Andrew McGowan. And Colm Basquel makes way for a returning Ciaran Kilkenny in the forwards.

A win for Dublin tonight will see them one step closer to a League Final, with only a trip to Cavan remaining next weekend. And Dublin fans will also be keeping a close eye on Austin Stack Park, maybe hope Kerry can get a positive result over Mayo to put a bit more distance between them and their rivals. Galway entertain Roscommon, and still have a chance to qualify.

We’ll be live from throw in at 7:00pm at Croke Park, with score by score updates on www.twitter.com/wearedub. And you can find all the post match reports and analysis from the game right here and on www.facebook.com/wearedub. 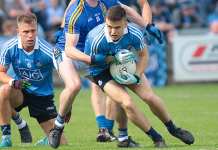 Can Monaghan Make It Three League Wins in Three Years Against...

VIDEO: WHO’S IN AND WHO’S OUT – DUBLIN v TYRONE