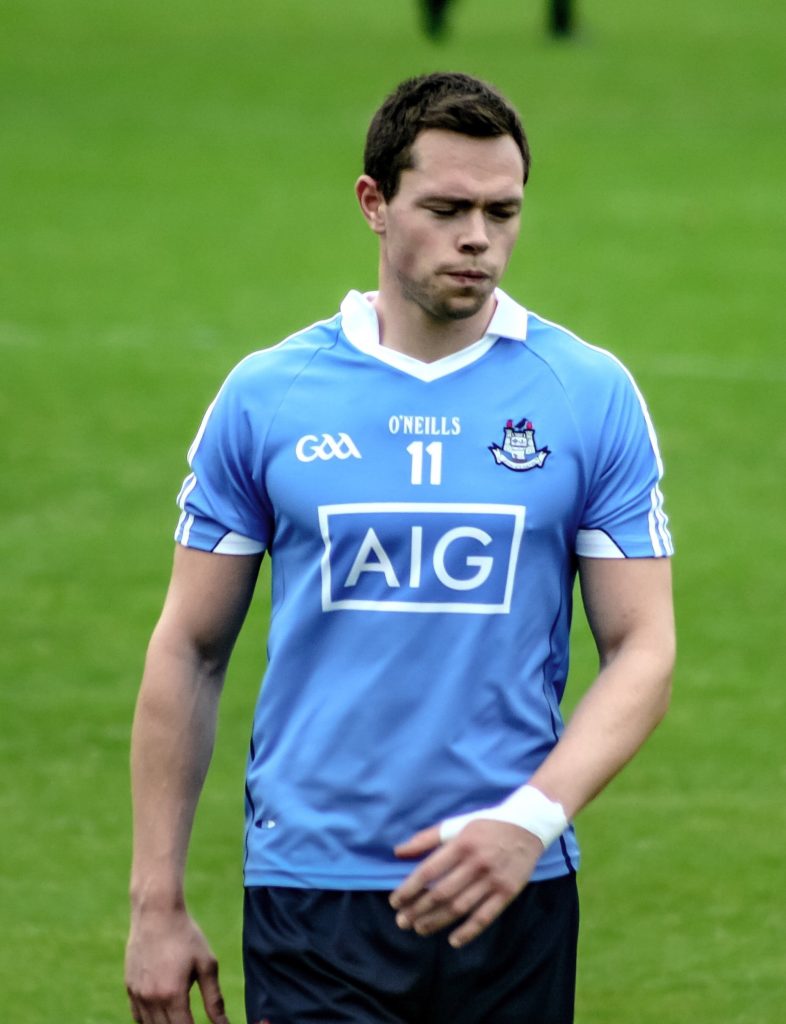 28,305 souls braved the bitterly cold winds and driving rain in Croke Park last night for the meeting of Dublin and Tyrone in the second round of the Allianz National Football League.

Neither the weather nor the game it’s self was for the faint hearted as Jim Gavin and Mickey Harte’s men went toe to toe in a dogged battle lacking in quality but full of toil and effort.

Dublin struggled to penetrate the Tyrone blanket defence which consisted of 13 or all 14 of their outfield players camped inside their own 45.

That struggle can be best emphasised by the fact that only one Dublin forward Ciaran Kilkenny managed to score from open play throughout the contest.

With ten minutes left to play Tyrone led by five and Dublin had to dig deep and show all their grit and character to grab a draw at the finish. After the game all the talk from both sets of supporters was the abysmal performance of referee Joe McQuillan.

Tyrone got the first point of the game after six minutes of frantic action but less than two minutes later the teams were all square when cornerback Philly McMahon finished off a Dublin move with a good point.

Dublin were enjoying plenty of possession early on, but were unable to convert that into scores, mainly down to some misplaced hand passes and considering the weather conditions also by choosing to play into Tyrone’s hands by bringing the ball into the tackle, which led to a number of turnovers.

Two points in the space of a minute from a Peter Harte free and one from play by Conor Meyler gave Tyrone a two point lead.

In the 15th minute Micky Harte’s men were dealt a blow when Tiernan McCann was shown a black card for hauling down Jonny Cooper. With the Dublin forwards struggling to get any change in the scoring zone, the pressure fell on Dean Rock to convert any frees Dublin were to get which were particularly in the first half few and far between.

Rock slotted over a dead ball effort in the 20th minute to leave two points between the sides. But in the closing minutes of the half Niall Sludden broke forward to slot over two good points for Tyrone.

Just before the whistle Dublin pulled one back when the ball bounced off the arm of a Tyrone player into the grateful hands of Jonny Cooper who slotted it over the bar to leave the score 0-05 to 0-03 to Tyrone at the interval.

Tyrone pushed their lead out to three points three minutes into the second half thanks to a good finish from Declan McClure.

A minute later and second half substitute Sean Cavanagh hauled down Paul Mannion for a penalty, Rock stepped up to take it but it was well saved by Niall Morgan.

Rock didn’t let the miss bother him and a minute later slotted over a well struck free. But seconds later and that missed penalty looked to have been a huge miss.

Aidan McCrory rampaged through the centre of the Dublin defence to slot the ball between Stephen Cluxton’s legs for the opening goal of the game and suddenly Tyrone led by five.

Dublin’s unbeaten record now looked to be in real danger of been finished but they were throw-in a lifeline when Tyrone’s Mark Bradley was rightly shown a red card for an off the ball punch thrown at Jonny Cooper.

Dublin now had the extra man but they were still finding it difficult to pick off scores but a Dean Rock free reduced the deficit to four.

With ten minutes left to play Niall Sludden grabbed his third point of the game to once again give Tyrone a five point advantage but it was to be their last score of the contest.

Instead of trying to push on Tyrone retreated all the men into their own half as they dropped deeper and deeper inviting Dublin on.

It was a huge mistake as Jim Gavin’s men relentlessly attacked and reeled off five unanswered points. Another Dean Rock free was followed by two brilliant points by Ciaran Kilkenny and Brin Fenton.

With three minutes of normal time remaining Rock hit a monitor of a free to leave the bare minimum between the sides. Six minutes of injury time were announced lifting a roar from the Dublin supporters in the stadium and with three minutes left Rock was presented with a free 48m out from the Tyrone goal.

The Ballymun Kickhams man put the ball on the deck, eyed the target and struck the ball straight over the black spot to earn Dublin a draw.

Tyrone will rue a missed opportunity to grab a victory but Dublin once again proved that they don’t know when they are beaten, it’s a huge psychological weapon to have in the squad and one that will serve them well for the rest of the season ahead.

The only worry for Dublin after the game was the sight in the 65 minute of James McCarthy having to be helped off the pitch with what looked like a serious injury, hopefully it’s not as bad as it looked.