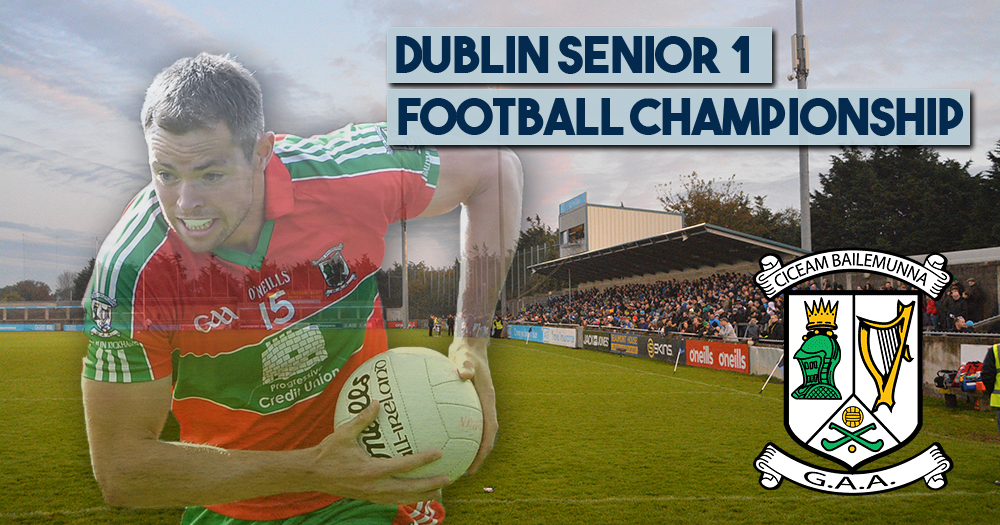 And just like that, we’ve reached the big decider in the Dublin Senior Football Championship. Not something we’re used to, but out of necessity this competition, like other, was played out beginning the last weekend in July. And in a heartbeat we’re down to the last two standing; Ballymun Kickhams and Ballyboden St. Endas. Tomorrow, we’ll be crowning Senior Football champions. Can Ballyboden retain their crown, or can Ballymun get over that hump and lift the trophy.

2012 Champions Ballymun have shown a swagger not seen among the ranks in a very long time and a lot of people credit this to the availabilty of their elit Inter County collective. Nonetheless the Northside club seemed to take the round robin phases at a canter.

A commanding start came July 25th when Ballymun recorded a 0-15 victory over Skerries Harps on home turf. In their 3-18 to 0-12 win, Dean Rock and Paddy Small lead the line with a combined 2-13 between them.

The Dublin duo did it again in Round 2 and put Ballymun out of sight by half time in their 3-26 to 1-10 win over Round Towers Lusk on the road. the Rock and Small show accounted for 2-11 before the half time break in a dominant performance, finishing 19 points clear of their opponents, and all but qualifying for the Quarter Finals before the final round.

In that Round 3 game they came up against 2019 finalists Thomas Davis, expected to be their toughest test of the competition. But a powerful second half performance saw The Mun cruise into the last eight with a 16 point victory. They only led by 0-02 at the break, but outscored Thomas Davis 2-10 to 0-02 in the second session. Brian Ashton, Dillon Keating and an opening minute goal from stalworth James McCarthy told the story of this game, showing the huge depth Ballymun have coming off the bench.

Despite trailing 0-08 to 1-10 to a very competitive Na Fianna at half time of this entertaining clash, Ballymun came out of the traps after break to score six points on the bounce to take control of this Quarter Final and never looked back. Kickhams, led by players like McCarthy, John Small and Cameron McCormack, took complete control.

Goals from Conor McHugh and Niall Cooper either side of half time didn’t help Na Fianna’s cause,a s Ballymun kept the scoreboard ticking, thanks in part to Dean Rock’s 0-08 tally. And substitute Andrew McCaul kept his nerve one on one with Na Fianna’s Stephen Murray to raise a crucial green flag.

With almost the same scoreline as the Quarters, Kickhams prevailed in a pulsating duel in Parnell Park. Both sides enjoyed purple patches before Ballymun came from behind after the second half water break.

Ballymun led by 0-05 to 0-01 early, but a Dan O’Brien goal breathed life into Kilmacud who clawed the defecit back with scores from Paul Mannion and Hugh Kenny. They led by 1-05 to 0-05 by the 25th minute, but Ballymun lifted their tales and were back 0-10 to 1-06 in front by the break.

The second half showcased the best in Dublin football as both sides relentlessly went at each other. And with six minutes remaining Crokes held a slight 1-12 to 0-14 score lead. The telling sign of Ballymun’s strength was the introduction of players like Jason Whelan, Dillon Keating and Cathal O’Tighe, the latter finding the net.

In the closing stages, Ballymun were five clear on 1-17 to 1-12 before losing Davey Byrne and Leon Young to cards as the game went into disarray.

Pat Burke skillfully converted a delivery from Paul Mannion into the net to close the gap to 0-02 giving Crokes a lifeline. But a Dean Rock late free finished the scoring and gave Ballymun the win, advacing to face Ballyboden St. Endas in the Senior Football Championship decider.