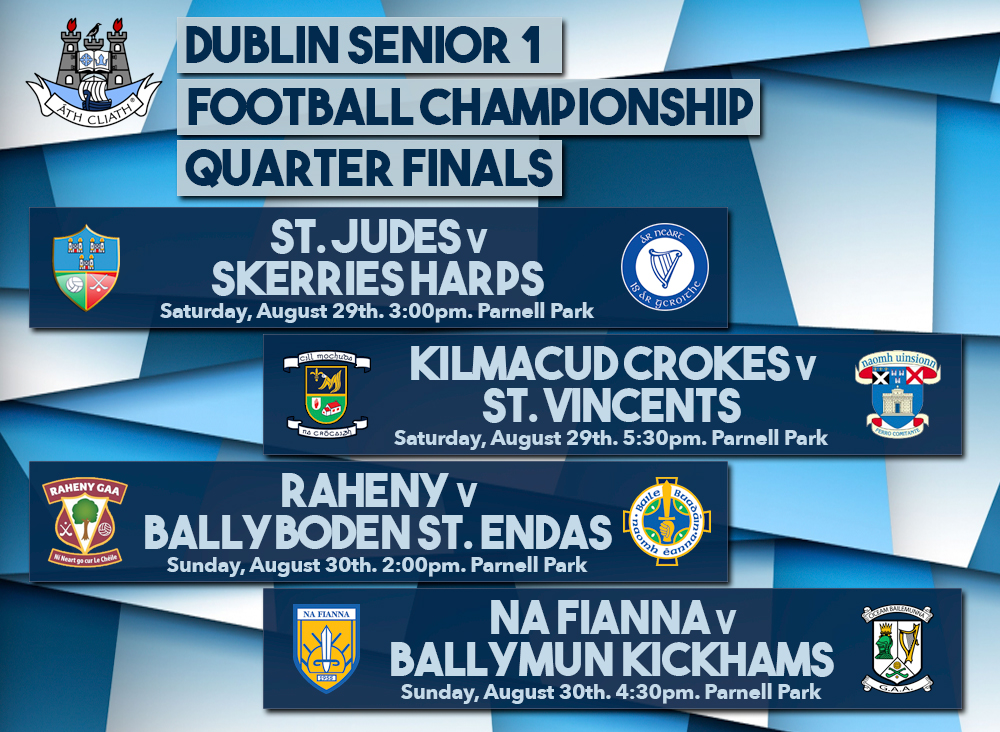 With last weekend’s hurling action being a very hard act to follow, our attention turns to this weekend’s Dublin Senior Football Championship. And after a frantically contested Round Robin phase, we’re into the Quarter Finals. Four games will take place in Donnycarney HQ over tomorrow and Sunday. Here’s the matchups and how they made the last eight.

It’s winners of Group 2 versus runners up of Group 1 as St. Judes and Skerries Harps go head to head in the first of the weekend’s Quarter Finals. Judes reach this stage of the competition unbeaten over three rounds. They built momentum from their Round 1 win over Na Fianna right through to their eight point win over Lucan Sarsfield on August 15th. Semi Finalists last year, beaten by Ballyboden St. Endas, Judes will obviously want to go that step further this year.

Skerries Harps picked themselves up after losing to Ballymun Kickhams in Round 1 and took on the challenge of Thomas Davis and Round Towers Lusk to score two wins and secure their Quarter Final slot. A hug improvement on the 2019 Championship where they finished bottom of Group 2 with only a narrow one point win over Clontarf in Round 2 to show for it. And with nothing to lose, they’re sure to give a Judes a good run.

No strangers to the knockout stages of this football championship, both Kilmacud Crokes and St. Vincents are once again back in the last eight of the competition. Vincents went out of the competition at this stage last year losing to Judes in their Quarter Final. And having only dropped points to Ballyboden St. Endas in this year’s competition finished as runners up in Group 3.They showed their strengths in their wins over Whitehall Colmcille and Clontarf.

Crokes were Semi Finalists last year, losing to Thomas Davis in that game. But they’ve once again ran three for three to top Group 4, and they did it in style scoring 10-44 over  the three games. They laid down a strong marker, beating Raheny by 6-13 to 0-10 in Round 1 and never dropped from those heights after. This will certainly be a hotly contested Quarter Final with the calibre of both sides coming to the fore.

Last year’s Senior Champions Ballyboden St. Endas are on course to retain their crown as they face Raheny in the first of Sunday’s game at HQ. Another clean sweep of wins in Group 3, seeing off Whitehall, Vincents and Clontarf. And chances are they won’t stop there in trying to make it back to back Championships. This is their third successive year in the knockouts.

Raheny scored a 2-13 to 2-10 win over St. Oliver Plunkett Eoghan Ruadh only this Wednesday to confirm their part of the action this weekend. After that tough defeat to Kilmacud Crokes in the opening round the north side outfit haven’t looked back. They lost out on a Quarter Final slot to Thomas Davis by score difference last year but have gone that one step further this year.

Neighbours Na Fianna and Ballymun Kickhams will complete the action on Sunday, and it’s set to be a very tight and tasty encounter. After losing to Judes in Round 1, Na Fianna left ten points to spare against Lucan Sarsfield and eight against Ballinteer St. Johns to finish Group 2 as runners up. They met eventual Champions Ballyboden in the last eight in 2019 with 2 goals seperating them at the full time whistle. The Mobhi Road side have looked tough and will be up for this game on Sunday.

With 9-59 in the bank, Ballymun have looked solid since their opening round win over Skerries Harps. And for the first time in a while look to be confident, with their band of Dublin Senior panelists all in check. They’ve left last year’s disappointing campaign behind them and are playing great football. Could this be the year the relive the dream of 2012 and reclaim the Senior title?