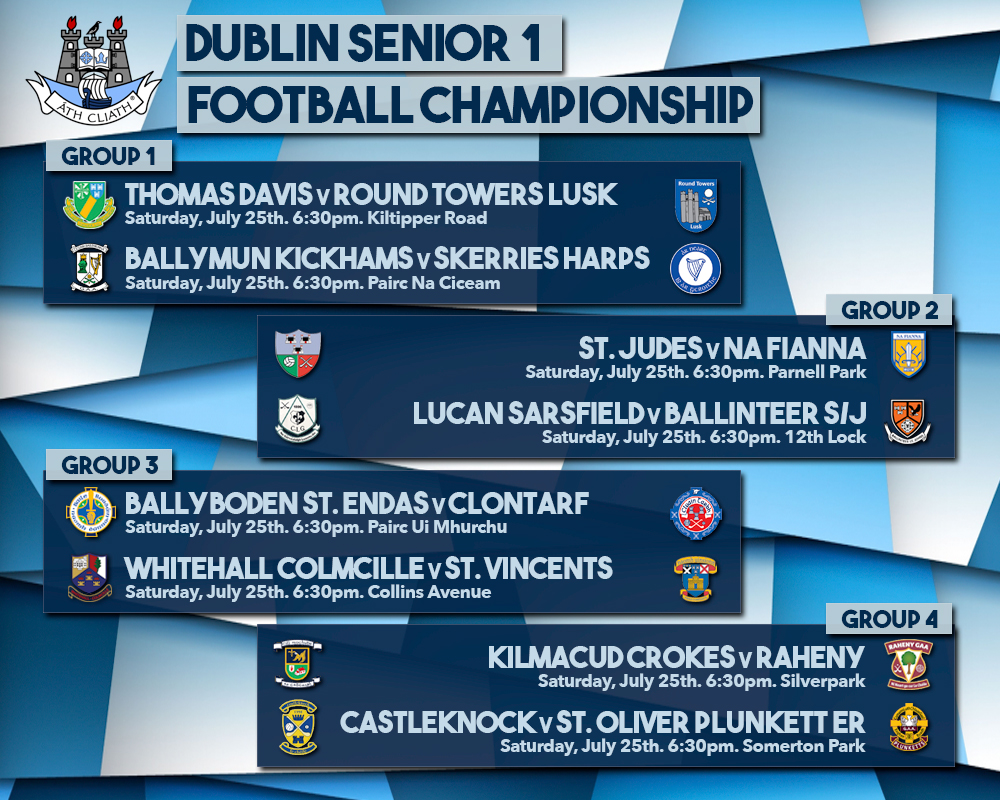 Well we’ve had the beginning of the Dublin Senior Hurling Championship just last weekend. And for fans of the bigger ball the Senior Football Championship gets up and running this weekend. The competition was due to start mid April so football supporters have been living for this for quite a while.

Saturday, July 25th, all games in all four groups of the Senior 1 Football Championship will throw in. And across eight venues, throw ins will all be at 6:30pm. Let’s see what Round 1 has on offer.

2019 runners up Thomas Davis are joined in Group 1 by newcomers Round Towers Lusk, and that’s who their Round 1 opponents will be with home advantage. Davis had a fantastic run in last year’s competition and they’ll be looking to start where they left off.

Ballymun Kickhams will be looking to improve on last year’s competition, and face Skerries Harps in the opening Round. Skerries avoided relegation last year, beating St. Brigids in a play off to keep their Senior 1 status.

The other two sides in the group, Lucan Sarsfield and Ballinteer St. Johns, square off at the 12th Lock, both finishing third placed in their respective groups last year. Judes and Na Fianna would be expected to come out of Group 2, but this year has already been unpredictable so who knows.

Reigning champions Ballyboden St. Endas will be looking to defend their crown in Group 3. Their Round 1 opponents are Clontarf, who were beaten Quarter Finalists last year. This promises to be an interesting tussle in Pairc Ui Mhurchu.

St. Vincents were also beaten Quarter Finalists last year and will be looking for their 29th county championship. And completing the quarter, and facing Vincents in the opener are newly promoted Whitehall Colmcille. Whitehall do well to make the most of their home advantage over a strong Vincents side.

The final group will be made up of last year’s beaten Semi Finalists Kilmacud Crokes who would be hot contenders again this year. Raheny are Crokes opening weekend opponents, and narrowly missed out on a last eight spot last year. They’ll be looking to get out of the group stages again.

St. Oliver Plunkett Eoghan Ruadh and Castleknock complete Group 4. Castleknock topped this group in 2019 before losing to Thomas Davis in the Quarter Finals. Plunketts will be stiff opposition but Somerton Park will be a difficult ground for the Cabra side.

FLYNN STILL UP FOR ANOTHER YEAR OF FOOTBALL AFTER WEDDING PLANS