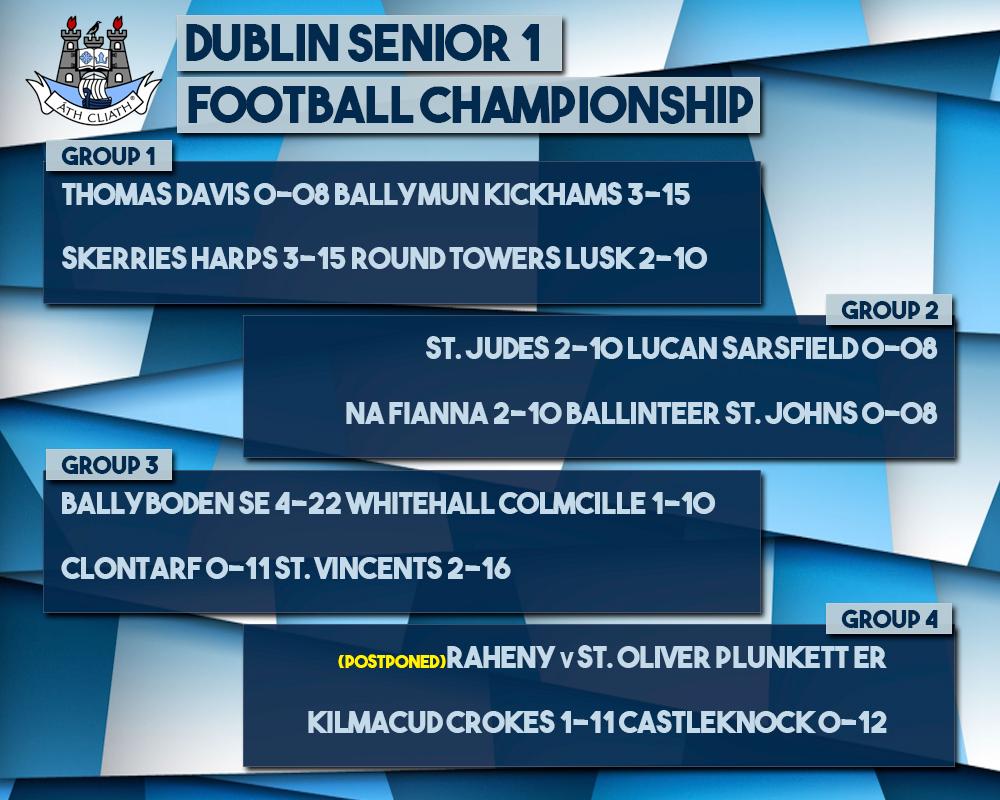 A bust weekend of action has come to an end. And we can see now at least 7 of the eight teams that will contest the Quarter Finals of this year’s Dublin Senior Football Championship. The postponed game between Raheny and St. Oliver Plunkett Eoghan Ruadh featured heavily in the media and leaves a small question mark of the second qualifying slot in Group 4. But outside of that we know the makings of the rest of the last eight.

Ballymun Kickhams stormed across the line yesterday afternoon, ending the dreams of Thomas Davis and securing their spot in the last eight. A powerful and dominant second half saw Ballymun 16 points clear on a 3-15 to 0-08 scoreline. That maintained their 100% record to see them top the group.

Skerries Harps recovered well after their opening defeat to Ballymun to follow it with wins in both Round 2 and Round 3. Yesterday they ended their round robin campaign with a 3-15 to 2-10 victory over Round Towers of Lusk. In the previous round they’d successfully beaten Thomas Davis bolstering their chances ahead of yesterday’s game.

A 2-10 to 0-08 win over Lucan Sarsfield in Round 3 sees St. Judes secure their Quarter Final slot. It also saw Lucan’s campaign come to an end. Judes went three for three to top Group 2 as they head for another knockout run.

Na Fianna ended their campaign on a high with a second consecutive win to qualify for the last eight. Their 2-10 to 0-08 victory over Ballinteer St. John’s combined with the win over Lucan in Round 2 got them over the line.

Ballyboden St. Endas ended their Group 3 campaign on a high, steamrolling Whitehall Colmcille by 4-22 to 1-10. That saw them clinch the top spot with their third win and into the last eight.

They’ll be joined by St. Vincents, who looked composed and sharp in their 2-16 to 1-11 win over Clontarf last night at Parnell Park. Vincents fell foul of Ballyboden in Round 2 after a 2-15 to 1-13 win over Whitehall in Round 1. So yesterday’s game against Clontarf was all or nothing for the Marino men, as Clontarf were also in the hunt.

Kilmacud Crokes made it three for three this afternoon, beating Castleknock by 1-11 to 0-12. That result still leaves Castleknock in the hunt for the second qualifying slot for the Quarter Finals. Crokes racked up big scores against Raheny and St. Oliver Plunkett Eoghan Ruadh in the opening two rounds. Today’s game was a lot closer with Castleknock running them to only a 2 point win.

We’ll have to wait and see the outcome of the Raheny v St. Oliver Plunkett Eoghan Ruadh to determine the final Quarter Final slot. Castleknock are plus 2 in terms of score difference ahead of Raheny. Should Raheny beat Plunketts they’ll advance, but if they lose it’s Castleknock’s spot, unless Plunketts win by a massive score margin.

DUBLIN CROWNED LAST EVER U21 ALL IRELAND CHAMPIONS