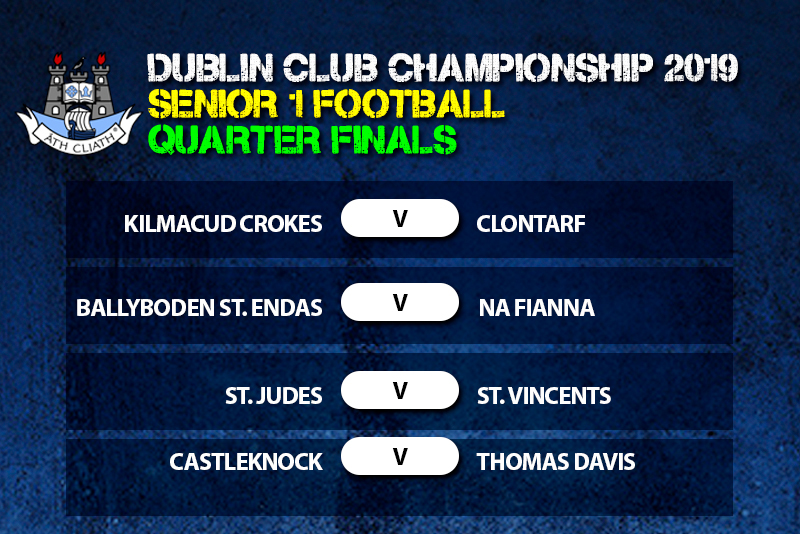 What a weekend of action in the Dublin Senior 1 Football Championship. And with Round 3 completed the layout of the last eight becomes clear. Some big results in the round. And here’s all the details.

Reigning Champions Kilmacud Crokes had already secured their Quarter Final berth before a ball was kicked in Round 3. But they finished in style, beating St. Sylvesters on Friday night in Parnell Park on a 2-19 to 1-10 scoreline. That combined with their first two wins over Ballymun Kickhams and Na Fianna see the Stillorgan side comfortably through.

Up to this weekend Clontarf were sitting bottom of Group 2 and it didn’t really look good for them as they entered the final round against Lucan Sarsfield. They had lost against both Ballyboden St. Endas and Skerries Harps by a single score. But they put all that behind them yesterday in O’Toole Park to beat Lucan by 1-15 to 1-08 and steal second position in the table.

Na Fianna were worth the entrance fee to Parnell Park on Friday, beating hotly tipped Ballymun Kickhams in final round to secure the second Quarter Final slot in Group 1. On a 0-13 to 0-08 scoreline they saw off Kickhams who’s only win in the three games was in the last round against St. Sylvesters.

Like Kilmacud, it was a clean sweep for Ballyboden St. Endas to secure the top spot in Group 2. Their 2-20 to 0-06 win over Skerries put the sheen on the unbeaten run to earn them the last eight slot.

After drawing their opening game against St. Oliver Plunkett Eoghan Ruadh, St. Judes ran out with wins over Raheny and Thomas Davis to finish top of Group 3 on five points. They’d a tight final round game with Thomas Davis but ended it as 1-09 to 0-08 winners.

St. Vincents are back in the knockouts, and will be looking for retribution after Judes sent them out of the competition in last year’s Semi Finals. They bounced back from their 3-08 to 0-14 loss to Castleknock in Round 2, beating Ballinteer St. Johns on Friday by 4-13 to 1-10.

Castleknock reach the Quarter Finals for their fourth consecutive year, and this year they did it in style. Three straight wins over Ballinteer St. Johns, St. Vincents and their 0-15 to 1-11 victory over local rivals St. Brigids yesterday saw them comfortably secure their slot.

What a great first year in it’s been for Thomas Davis securing a Quarter Final berth. Having secured the Senior 2 Football Championship title last year, they’ve successfully traversed the Senior 1 Round Robin phase. One win, and one draw was enough to see them grab the second pot in the last eight from the group. They were beaten yesterday by Judes, but their Round 2 win over Plunketts, and their draw against Raheny on the opening day got them over the line.

*Dates and throw in times are to be confirmed by the county board this week.