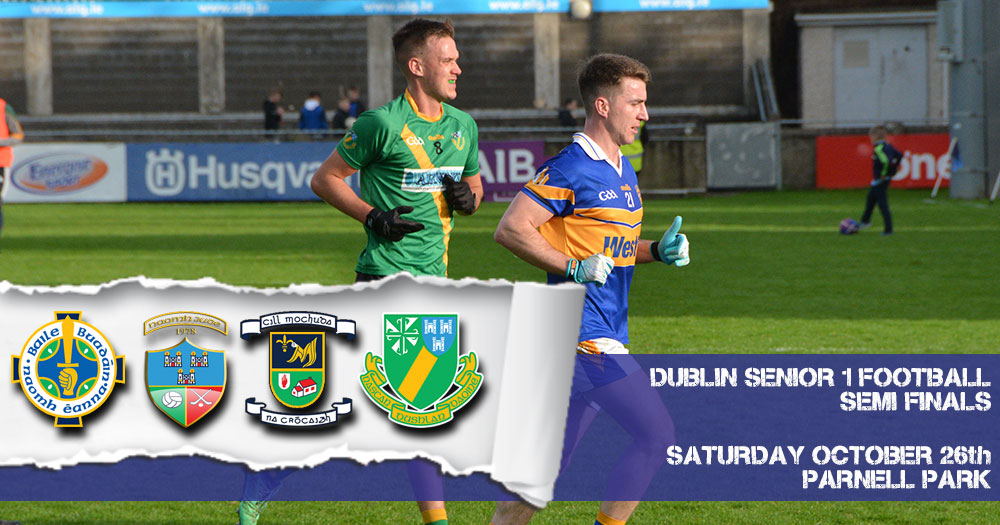 Two teams will emerge today to compete for this year’s Dublin Senior 1 Football Championship trophy. And by tonight we should know who that will be.

First up is 2016 All Ireland Club Champions Ballyboden St. Endas who will face St. Judes. Judes are in the last four for the fourth consecutive year. And will want to be in a championship final for the second time of asking. Beaten in last year’s final by reigning champions Kilmacud Crokes, Judes still seek their first Senior Football title. Ballyboden go in search of their fourth and would love nothing more than to repeat the run they had in the 2015/2016 competition.

It was a straight forward win over Vincents in their Quarter, repeating the result from twelve months previous. They were certainly the more organised side, holding Vincents to one second half score.

For Ballyboden, Colm Basquel got them both out of jail and into the Semis, after a tough encounter with Na Fianna.

In the second of today’s Semi Finals reigning Senior 1 Champions Kilmacud Crokes take on reigning Senior 2 Champions Thomas Davis. And while Crokes would have fancied themselves to retain the Senior 1 title, the presence of Thomas Davis has certainly raised a few eyelids. Particularly Crokes boss Johnny Magee who stuck around to watch Thomas Davis comfortably beat Castleknock in the last eight.

Having just won promotion to Senior 1, Thomas Davis have looked impressive since edging out Raheny to go into the Quarters as underdogs. And despite being the only side in the last four without a Dublin Senior inter county panelist, the Kiltipper side, three goals Eoin Kirby, Ciaran Farrelly and Brendan Kirby paved the way for the well-deserved victory.

Crokes came through their tie against Clontarf with the introduction of Paul Mannion changing the game at the break. Clontarf lost Jack McCaffrey to a straight red card as their game came crashing down around them.

We’ll be live from the first throw in at 5:15pm in Parnell Park, with score by score updates on www.twitter.com/wearedub. And you can find all the post match reports and analysis from the game right here and on www.facebook.com/wearedub.