After a packed weekend of action, we can focus on the Quarter Finals of the Dublin Senior 1 Football Championship 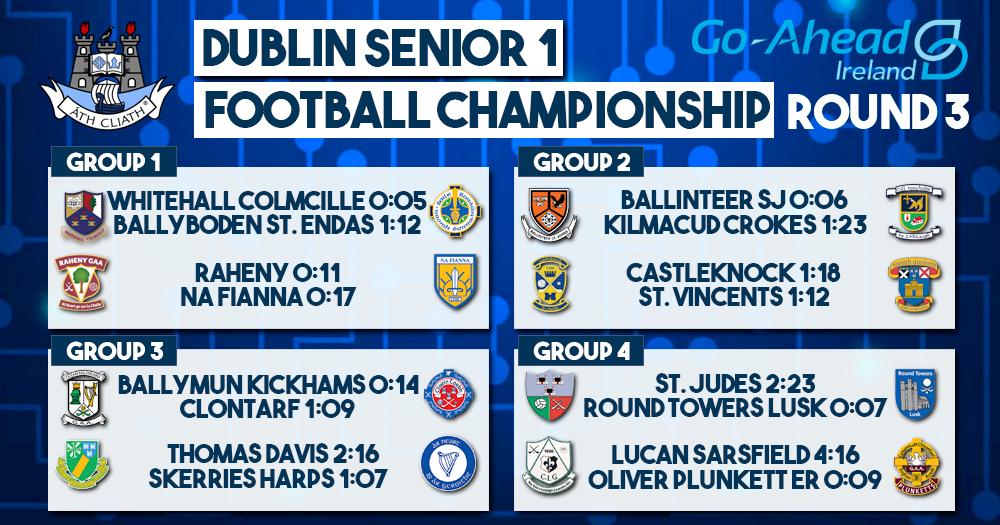 A strong opening and closing quarter saw Na Fianna progress to the quarter finals of the Go Ahead Dublin Senior 1 Football Championship following their Group 1 Round 3 victory (0-17 to 0-11) over Raheny in Parnell Park yesterday afternoon.

Na Fianna’s reward is a last-eight clash against the in form Kilmacud Crokes finishing runner up in the group.

Meanwhile a second half goal from Conal Keaney steered Ballyboden St Enda’s to a 1-12 to 0-5 victory over Whitehall Colmcille in the other SFC1 Group 1 tie.

It saw Boden top the group on 5 points, but they await a decision on their Quarter Final opponents.

Kilmacud Crokes kept their 100% record yesterday when they completely outclassed Ballinteer St Johns, winning on a 1-23 to 0-06 scoreline.That puts Crokes through as Group 2 winners to face Group 1 runners up [???]

The matter of the second Quarter Final slot will now be decided in a play off between Castleknock and Ballinteer St. Johns. Castleknock were 1-18 to 1-12 winners over St. Vincents, leaving all three sides below Kilmacud Crokes on 2 points in the table.

Ballymun’s 0-14 to 1-9 victory over Clontarf at St Margaret’s sees them conclude the round robin group stage in first spot following their tight battles against Thomas Davis (1-12 to 1-10) and Skerries Harps (1-12 to 0-15) in the earlier rounds.

Thomas Davis impressed in their comprehensive 2-16 to 1-7 victory over Skerries Harps at Parnell Park to finish in the runners-up spot.

St Jude’s held the upperhand to comprehensively defeat Round Towers of Lusk by 2-23 to 0-7, in Sunday’s Go-Ahead Dublin SFC1 Group 4 clash yesterday afternoon.

The convincing margin of victory saw the Tymon North side top the group despite Lucan’s commanding 4-16 to 0-9 victory over St Oliver Plunkett/Eoghan Ruadh in the same group at O’Toole Park.

Lucan were much too strong for Plunketts at O’Toole Park running out 19 point victors.

Their goals came from the impressive duo of Brendan Gallagher (1-8, 0-2f) and Harry Ladd (1-4) as well as Colm Walsh and Robert Ennis.

So now we know seven of the eight Quarter Finalists, with Castleknock and Ballinteer St. Johns playing off for the last of the eight slots.