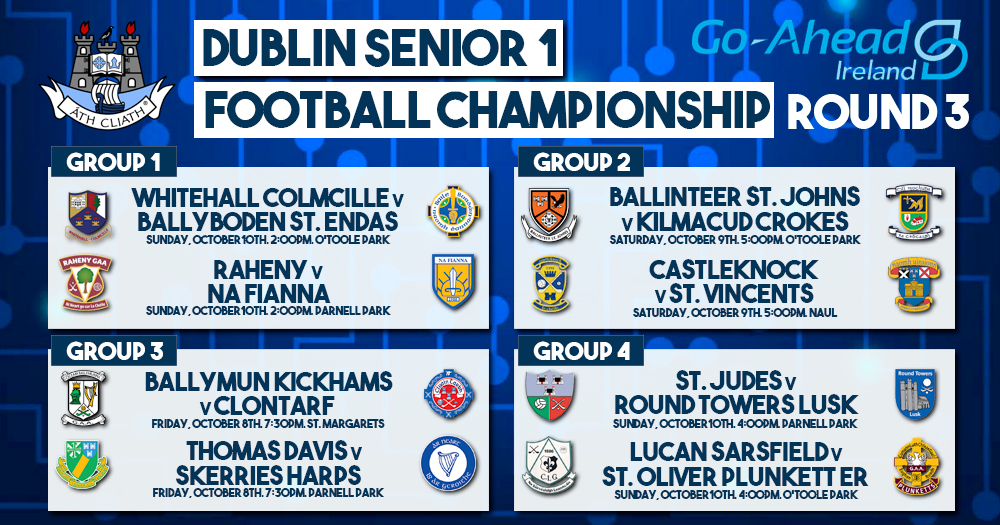 There’s no doubts that we’ve been treated to some fantastic action do far in this year’s Dublin Senior 1 Football Championship. And this weekend should be no different. All teams in the four groups prepare to do battle one last time before the competition reaches the knockout stages.

Before the weekend fixtures, Ballyboden St. Endas and Raheny must do battle in a Round 1 rematch tonight with the winner of this making the Group 1 table a lot clearer ahead of the last round.

A 2-17 to 0-08 win in the original fixture saw Boden finish strong 15 point winners. However, a breach of rules with regard to the number of subs used by the southsiders has brought about tonight’s rematch.

Whitehall, who have lost both their round games so far. And they’ll take on Boden at O’Toole Park on Sunday, and Raheny will take on Na Fianna in the other Round 3 game in Parnell Park at the same time. But the outcome of this group heavily depends on tonights Round 1 rematch.

Having alresdy beaten St. Vincents and Castleknock, Kilmacud Crokes do battle with a Ballinteer St. John’s side who bouncer back from their opening round defeat to beat Castleknock 2 weeks ago.

Castleknock, the only side without a result, face Vincents on Saturday in the Naul with the Marino side hoping to finish strong.

Having tied their game in the last round, Ballymun Kickhams and Skerries Harps are also tied at the top of the Group 3 table on 3 points.

Ballymun face a Clontarf side yet to register a win. And Skerries face Thomas Davis, who still have an opportunity to qualify for the Quarter Finals should they on Friday night at Parnell Park.

Like Group 3, Lucan Sarsfield and St. Jude’s share the top spot on Group 4. After their opening 1-14 a piece tie in Round 1, both sides successfully won their respective Round 2 fixtures.

Now Lucan head for O’Toole Park on Sunday to face St. Oliver Plunkett Eoghan Ruadh knowing a win or a draw will secure a knockout slot. For Jude’s, they must face Round Towers Lusk in their final round game. Towers beat Plunketts in their opener. And only narrowly lost to Lucan in Round 2 so there’s everything to play for.

Stay tuned this Sunday when we’ll round up the results from all these games and bring you the Quarter Final picture in the competition.