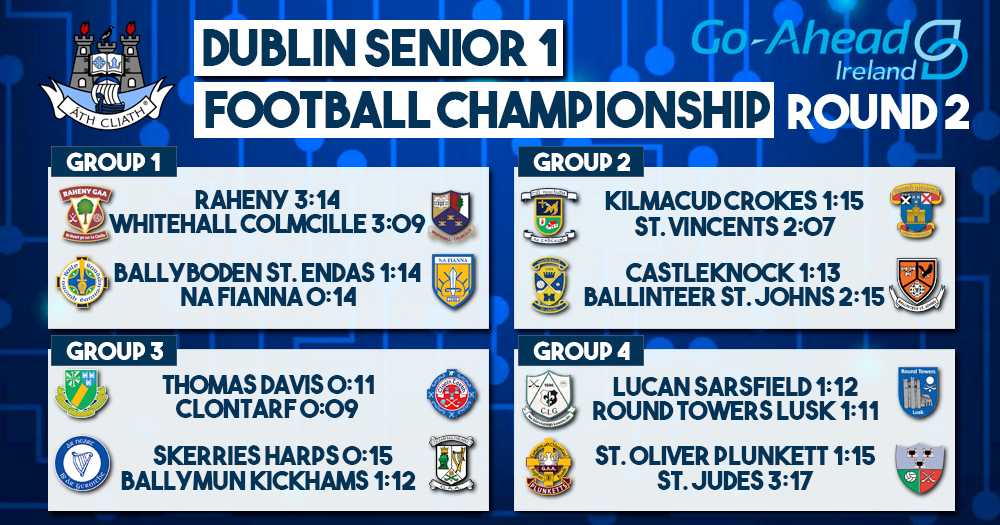 The final whistle has gone on the last 2 of this weekend’s Go Ahead Dublin Senior Football Round 2 games and the picture is clearer as the teams prepare now for the final round. Ballyboden St. Endas and Kilmacud Crokes have put one foot in the door both securing 2 wins out of 2. But there’s some work to do for the rest of the trailing pack. Here’s the details on all this weekend’s games.

Whitehall Colmcille suffered their second Championship defeat on Friday evening as Raheny beat their near neighbours by 3-14 to 3-09. They’ll face Ballyboden St. Endas in the final round.

A goal seperated Ballyboden St. Endas and Na Fianna at full time this evening at Parnell Park with Boden winning by 1-14 to 0-14 and securing a second victory to top the group.

Two wins form two for Kilmacud Crokes. Earlier today they saw off the challenge of St. Vincents at Parnell Park. The 1-15 to 2-07 win puts Crokes in pole position ahead of their final round clash with Ballinteer St. Johns.

After to losing to Vincents in the opening round, Ballinteer were victorious this afternoon, beating Castleknock by 2-15 to 1-13. Castleknock go into Round 3 without a win and face a tough challenge against Vicnents.

Stalemate yesterday afternoon in Donnycarney between Ballymun Kickhams and Skerries Harps. A 0-15 to 1-12 scoreline saw the sides share the points.

Skerries face Thomas Davis in Round 3. Thomas Davis were 0-11 to 0-09 winners over Clontarf yesterday giving them a chance in the final round. Clontarf will need a big performance against Ballymun.

A one point win for Lucan Sarsfield at Parnell Park yesterday gives them the edge in the group ahead of the final round. Their 1-12 to 1-11 victory over Round Towers Lusk was welcome after their opening round draw with St. Judes.

Disappointment for St. Oliver Plunkett Eoghan Ruadh as they fell foul of St. Judes who bounced back from their opening round draw with Lucan to win by 3-17 to 1-15.

That ties Lucan and Judes at the top of the table but it’s all to play for.

Thats’s a wrap for theis round of the Football Championship. Join us next Saturday and Sunday as we’ll bring you details of the next round in this year’s Senior A Hurling Championship.