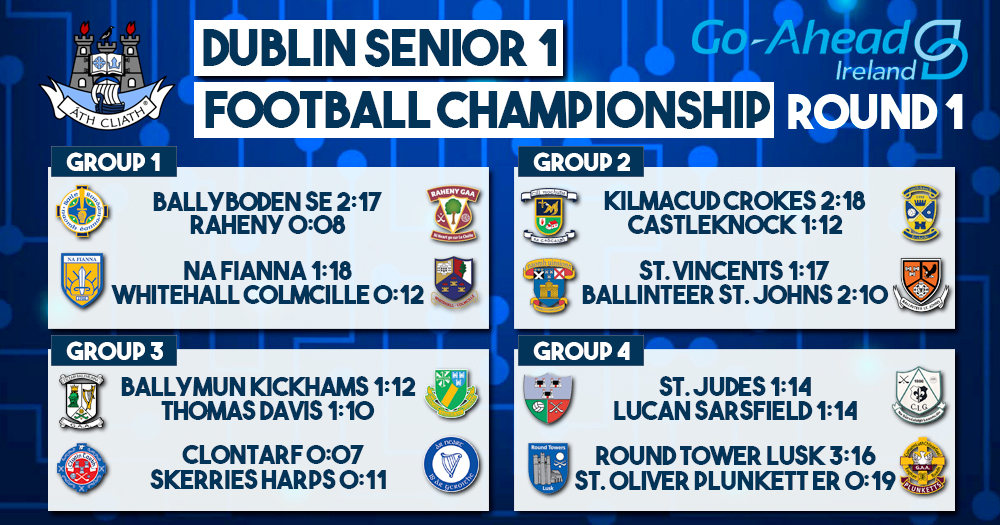 On Friday and this afternoon the opening games in this year’s Dublin Senior 1 Football Championship got underway. And as the clubs now turn their focus to Round 2, we take a look at the results from all this weekend’s action. Here’s all you need to know.

In a powerful second half Ballyboden St. Endas secured a win over Raheny to start to their 2021 Championship campaign. Jusy 2 points seperated the sides at half time in today’s game in Parnell Park. But Boden dominated the second session. They outscored their opponents by 2-10 to 0-03 to finishing the game on a 2-17 to 0-08 scoreline.

On Friday Night, recently crowned AFL1 Champions Na Fianna got off to the perfect start. A 1-18 to 0-12 win over near neighbours Whitehall Colmcille was the outcome. Na Fianna were up by nine at the half time break, and Whitehall enjoyed a tonne of second half posession but could capitalise on any advantage.

Kilmacud Crokes came out on top in their opening round game against Castleknock in Parnell Park this afternoon. Crokes held a 3 point lead on a 0-12 to 1-06 scoreline and pushed on in the second half to run out 2-18 to 0-12 victors.

In O’Toole Park it was the Round 1 clash between St. Vincents and Ballinteer St. Johns. At full time it was the Marino men of Vincents who secured a four point win on a 1-17 to 2-10 result. three points seperated the sides at the break in Crumlin but Vincents held on in a tight second session scoring 0-09 to Ballinteer’s 1-05.

Friday night saw wins for Ballymun and Skerries. Reigning champions Kickhams drew on all their big game experience as reigning champions to come from behind to score a win over Thomas Davis by 1-12 to 1-10.

In Balgriffin, Skerries Harps secured an opening round win over Clontarf on a 0-11 to 0-07 scoreline.

St. Judes and Lucan Sarsfield had to share the points with nothing seperating them in today’s Group 4 action. A final score of 1-14 a piece will mean both Judes and Lucan will be going after vital points in Round 2.

In the Naul on Friday, Round Towers Lusk recorded a 3-16 to 0-19 victory over St. Oliver Plunkett Eoghan Ruadh to get their Senior 1 Campaign off to the perfect start. Goals scored by Liam Bohan, Killian Healy (pen) and Sean Flood proved the difference.

Join us next week as attention turns to Round 2 of the Dublin Senior Hurling Championship. Also we’ll have more action from the Dublin Adult Camogie Championships