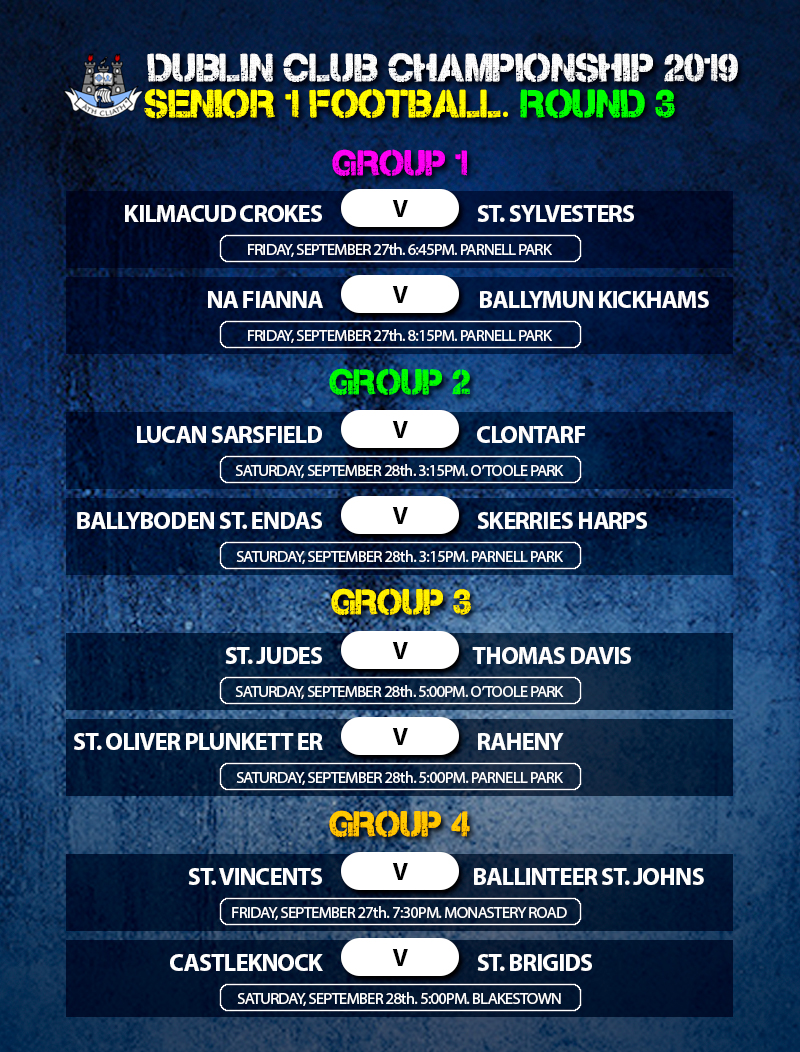 Well there’s no rest for the wicked. And before the Dublin Senior Footballers take to the city streets on Sunday in celebration of their record five All Irelands in a row, there’s the small matter of the Dublin Senior 1 Football Championship which takes place this Friday and Saturday.

The sixteen teams in the top flight will complete the round robin phase and we’ll know who will advance to the Quarter Finals.

Reigning Champions Kilmacud Crokes lead the line in Group 1. In the last round they enjoyed a 1-12 to 0-09 win over Na Fianna.

Friday sees them taking on St. Sylvesters in the final round, which should see them through the the last 8 regardless of the result.

After losing to Crokes in Round 1, Ballymun Kickhams dusted themselves off to claim a 4-20 to 2-10 victory over Sylvesters. Their challenge this weekend will be that of Na Fianna.

This tie will decide the second team through to the Quarter Finals. And it could go either way, with only a four score difference between the sides.

Ballyboden St. Endas remain in pole position with two wins from two and that will see them advance to the knockouts before they face Skerries. Skerries could still make the cut should they beat Boden, but it will all depend on the result from the other game.

Having suffered a ten point defeat to Ballyboden in Round 2, Lucan are fighting for that second slot. But a win over Clontarf should see them through. Both games will be watched to see the final outcome.

In the tightest of groups, newcomers Thomas Davis and St. Judes will play each other this weekend to decide who tops the group table. With both sides drawing their respective Round 1 games, they went hell for leather in Round 2 and both produced wins.

Unless St. Oliver Plunkett Eoghan Ruadh and Raheny put in some big scores, Judes and Thomas Davis should finish as the top two in the group.

St. Vincents and Ballinteer St. Johns are in second and third position in Group 4, with Vincents 10 scores ahead Ballinteer. Castleknock top the group and will go through they play bottom of the group St. Brigids on Saturday.

So the battle for the second qualifying place will be played Friday as Vincents and Ballinteer lock horns.