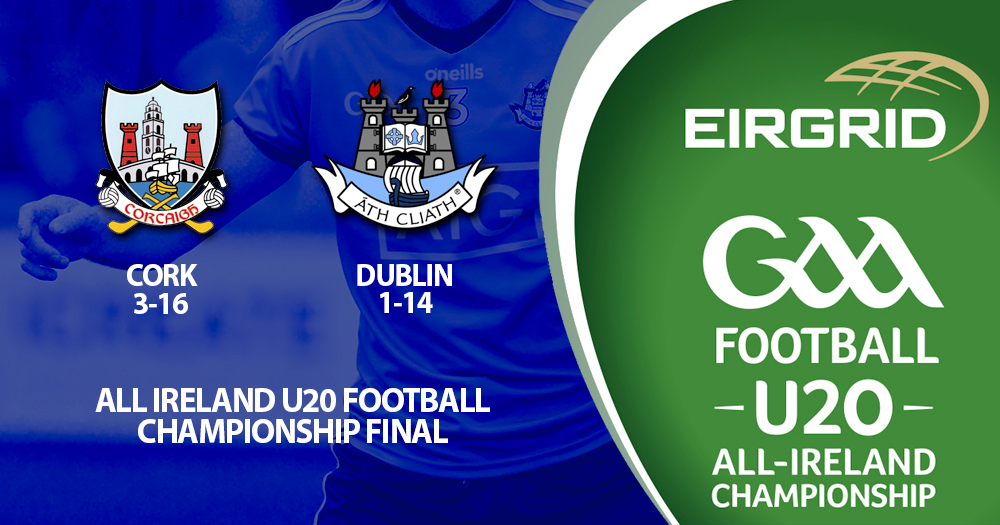 It wasn’t Dublin’s day today as Munster Champions Cork came to Portlaoise and picked the Dubs apart to win the EirGrid All Ireland U20 Football Title.

Dublin had rocketed into a nine point lead before the end of the opening quarter, and Cork hadn’t even registered a score.

But that would quickly change as the rebels dominated the remainder of the half scoring 3-06 to Dublin 0-04 in a dominant display.

The Dubs started the brighter with the wind at their backs, James Doran, Ciaran Archer (2), Brian O’Leary and Ross McGarry (2) all found the target before Archer got Dublin’s goal.

But his handling let him down and Archer robbed possession and shot off the ground from a tight angle. The shot eventually found the net through the legs of the Cork keeper.

With Dublin firmly in the box seat, Cork needed to kickstart their half. And they did that with aplomb scoring three quick fire goals.

An end line pass from Mark Cronin was met and volleyed into the net by Blake Murphy for their first. Cronin got Cork’s second getting on the end of short dropped shot by Cathal O’Mahony.

To their credit, Dublin managed to stay in front for a period thanks to scores from Archer, Donal Ryan and Brian O’Leary.

But the lead was short lived as Damian Gore, O’Mahony and Daniel O’Connell pointed as Cork finished the half ahead by 3-06 to 1-10.

Within 6 minutes of the restart, Dublin had drawn level with Cork. A Ciaran Archer free and a score from Brian O’Leary squared the tie, but Archer would rue two attempts blasted wide.

On the 40th minute Cork commenced their second half haul, with Cronin converting a free. Substitute Jack Murphy added a score and O’Mahony another to push their lead out to three scores.

Dublin’s loss of O Cofaigh Byrne and Lynch Bissett only strengthened Cork’s hand as they controlled the tie. And Damian Gore finished out the game with three unanswered scores in four minutes. Fionn Herlihy scored the final point off the bench to see Cork finish as deserved All Ireland Champions.