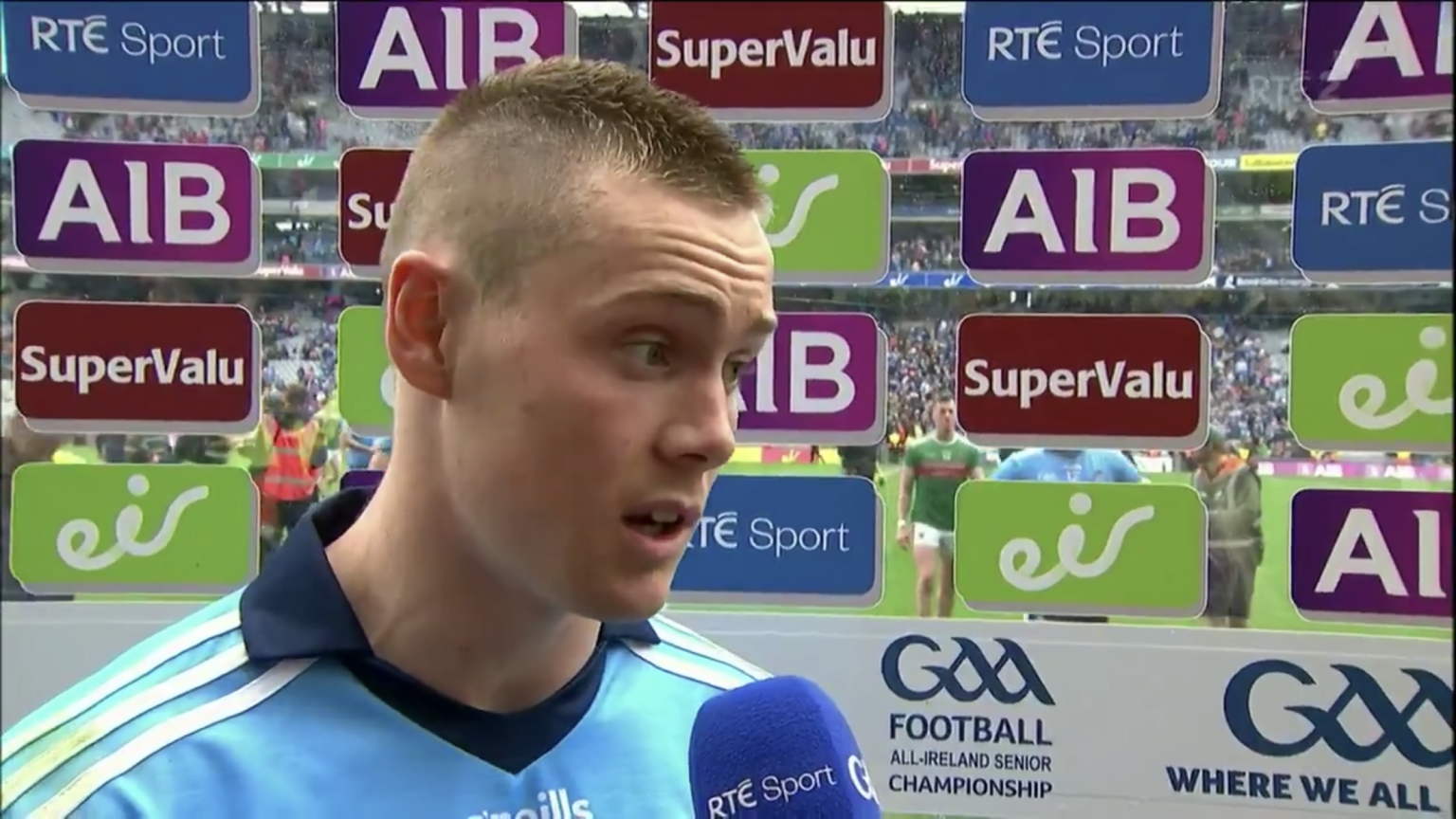 Con O’Callaghan led the Dublin second half blitz of Mayo with two sublime goals as Jim Gavin’s side buried the men from the West to book their All Ireland Final place on the 1st of September.

It wasn’t all plain sailing for Dublin though and they found themselves two points down at the break.

Mayo enjoyed the better of the opening 35 minutes turning over plenty of possession and enjoying more room to shoot than they could of dreamed of.

Dublin certainly weren’t at the required aggression and pace levels in the first half and maybe as Pat Spillane so eloquently put it a few weeks back that the Dubs were just ‘fluting around’ with Mayo and lulling them and their supporters into a false sense of security.

The Dublin side that emerged for the second half was a completely different animal full of controlled aggression and menacing pace and they blitzed Mayo for 2-07 and James Horan’s team were like rabbits caught in Dublin’s blazing headlights.

GOAL Dublin!
Con O'Callaghan with a tidy finish to put Dublin 1-07 to 0-08 ahead after 37 minutes. Watch highlights tomorrow night on @rte2 from 9.30pm #rtegaa #dubvmayhttps://t.co/IGMOwzYsmu pic.twitter.com/6YUdG8k7Fe

Even the introduction of Keith Higgins, Andy Moran and Kevin McLoughlin couldn’t turn the tide and Jim Gavin’s side were relentless to the finish.

Mayo got off to a bright start and went two points up inside the opening five minutes with points from Cillian O’Connor from a free and Séamus O’Shea.

The game was all level by the 11th minute thanks to the ever accurate free taking of Dean Rock.

James Horan’s side got their noses back in front with a point from James Carr. But Dublin took the lead for the first time in semi final tanks to two Paul Mannion points, the second a result of a poor kick-out from Rob Hennelly.

The Connaught men though had the better of the remaining twenty minutes of the half, turning over multiple possessions and outscoring Dublin by five points to two.

Man of the match Con O'Callaghan is feeling fine after his knock but is still not willing to discuss the Drive for Five #RTEGAA pic.twitter.com/qoju3sHgGN

The Mayo points coming from Cillian O’Connor with a brace, two from Paddy Durcan and one from Colm Boyle. A Dean Rock converted free and an excellent point from Brian Howard left the score at the break 0-08 to 0-06 to Mayo.

It was very much though a tale of two halves as Dublin up the anti after the break and tore Mayo to shreds.

Dean Rock opened the scoring in the second half with another converted free and then a move down along the Cusack Stand is involving Mannion and Kilkenny seen the latter release Con O’Callaghan in the clear and the Cuala man spotted the ball low and hard into the bottom left hand corner of the net.

The flood gates opened after that, Mayo were completely rattled and they struggled to win any of their kick-outs for the next 10 minutes and Dublin were cold, ruthless and calculated in punishing them and further points from Paul Mannion with three beauties, Niall Scully and Dean Rock and a brilliant second goal from O’Callaghan who left Keegan for dead, put Dublin out of sight.

A Lee Keegan goal in the 52nd minute relieved the pressure momentarily, but Dublin were in no mood to take their foot off the Mayo jugular and Brian Fenton finally drove the final nail in James Horan’s sides coffin just after the hour mark with a well taken goal.

Dublin manager Jim Gavin insists there was no half-time hair drier treatment for his players, after they produced a blistering second-half display against Mayo to book their place in the All-Ireland final. #rtegaa pic.twitter.com/zEfaA41hv4

Stephen Coen pointed for Mayo but that was answered in kind with a fine effort from Fenton.

Cillian O’Connor not for the first time in his career lost his discipline and was shown a second yellow and subsequent red, it should have been a straight red for a disgraceful tackle on David Byrne who had kept him shackled all game.

Jim Gavin sent on Diarmuid Connolly as the game entered injury time to a huge roar from the Dublin support.

Fergal Boland hit a late injury time point for Mayo but they had long been a beaten side well before the final whistle.

For Dublin they now look forward to an All Ireland Final against either Kerry or Tyrone in the 1st of September, the drive for five talk will begin in earnest, but that’s for another day, today was all about securing a place in the final and Jim Gavin’s side did that while sending out a serious message to boot.

Roll on September the 1st.

Macauley And Byrne May Lose Out On Semi Final Starting Spots