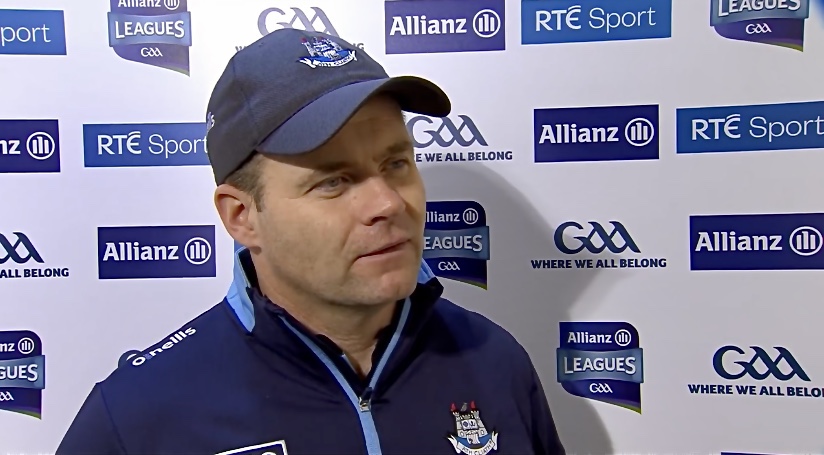 Dublin manager Dessie Farrell has backed the new back-pass rule which prohibits an outfield player who receives a kickout passing the ball straight back to their goalkeeper.

The motion which was proposed by the Raheens club in Kildare was passed at the GAA’s Annual Congress last weekend receiving 62% of votes from delegates this despite little or no discussion on the motion either leading up to Congress or on the day.

Normally new rules go through a trial period, usually during the National League, but the new back-pass rule won’t be used in the remainder of the league and will instead come into force at the start of the championship.

Although Dublin manager Dessie Farrell has endorsed his approval of the new rule he expressed his surprise at the timing of its introduction and said it would have made more sense to introduce it during the remainder of the league.

“I actually think that’s a good rule change,” the Farrell said. “It’s squeezing the thing up.

“Because you can see out there in situations where teams want to run down the clock, they’ve got their advantage and the use of the goalkeeper becomes quite apparent in that way. It just makes it more interesting.

“Normally they like to try these things out, so I’m not sure what the motivation for it is. Is it a knee-jerk to something? But I think, on face value, I wouldn’t be opposed to it.”

Farrell isn’t the only manager in support of the rule but is questioning the timing of its implementation.

New Galway boss Pádraic Joyce doesn’t believe it’s right to be tampering with the rules mid-season and the GAA authorities should have waited till next year to introduce the new rule.

“I would feel you can’t be tampering with rules mid-season said Joyce. We’re training for one set of rules already, so I think it needs to be left until next year’s championship or next year’s league.”

Mickey Harte was less enthused about the new rule and questioned why it was brought in for in the first place.

“Ach, sure it’s time for another rule change, isn’t it? The referees are getting used to the ones that are there, so give them a couple more.”

“It may incentivise teams to press,” Harte added, “but I don’t know what the criteria was for those who brought it in, what they had in mind.”