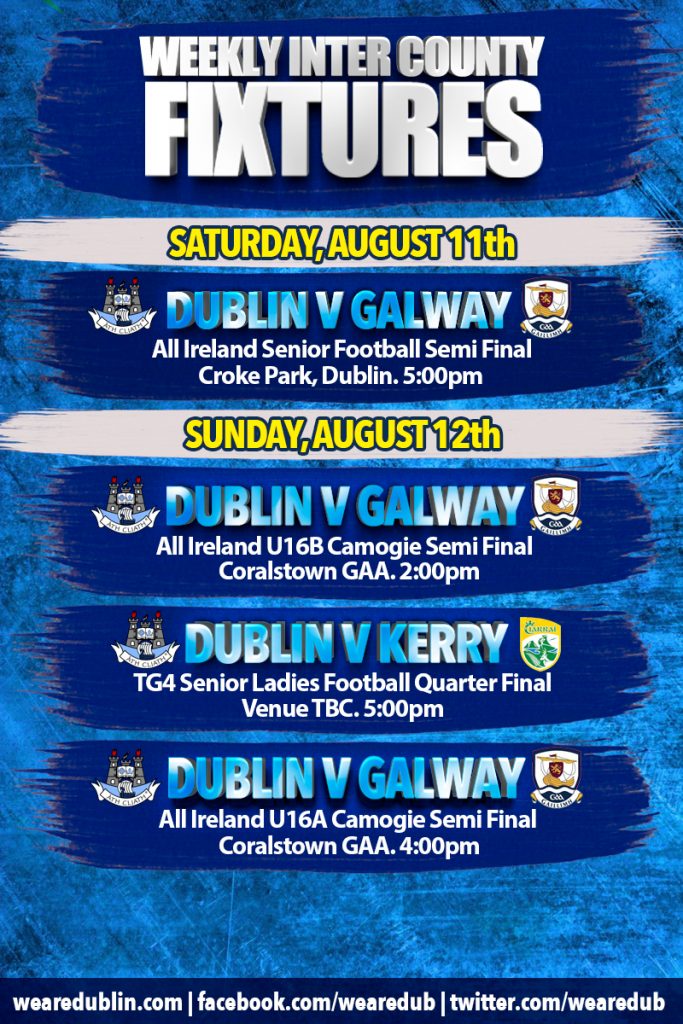 We’re sure all of you are currently enjoying the end of your Bank Holiday weekend. And also looking back on Dublin’s comprehensive win over Roscommon yesterday. There’s only a few weeks left in the 2018 calendar. And this weekend we have another four Inter County fixtures to give you details on.

So lets’s get straight into it.

The first ever All Ireland Super 8’s competition is now over and the parings are set for this year’s All Ireland Semi Finals. Dublin face Galway on Saturday evening in Croke Park for a place in the final. Jim Gavin’s men are in search of a record fourth All Ireland in succession. But the Tribesmen are standing in their way. Throw in is 5:00pm in Croke Park, and anyone interested Galway and Meath will square off in the Minor Football Semi Final beforehand at 3:00pm

No venue has been confirmed as of yet for this fixture, but it will be a throw in time of 5:00pm. once the LGFA confirm a venue we’ll update you all.

All Ireland U16 Camogie Championship.

Both of Dublin‘s U16 panels have successfully traversed the group stages of their competitions to reach the All Ireland Semi Finals. The U16B Camogie panel finished level on top of their group with Cork on 7 points, beating Clare and Kilkenny along the way, and drawing with the girls from the Rebel County. They’ll face Galway this weekend, who won both of their group games to make it to the Semi Finals. And the winners will face the winners between Cork and Tipperary from the other Semi Final.

The U16A panel ended their group campaign in 2nd position behind Cork, the only team to beat them in the rounds. They also face Galway who topped their group with 3 wins from 3. The Dubs also saw off the challenge of Clare and Kilkenny to reach the Semis and they’ll also meet either Cork or Tipp should they get past Galway.

Both games will take place in Coralstown GAA, Kinnegad on Sunday. The U16B Semi Final will throw in at 2:00pm and the U16A game is at 4:00pm.

And that’s all the fixture details for this weekend. Still plenty of action to enjoy before the end of the Inter County Calendar.

Galway minors knock Dublin out of All Ireland championship