It certainly was a Super Saturday, and we had some interesting and enjoyable Dublin results across the games 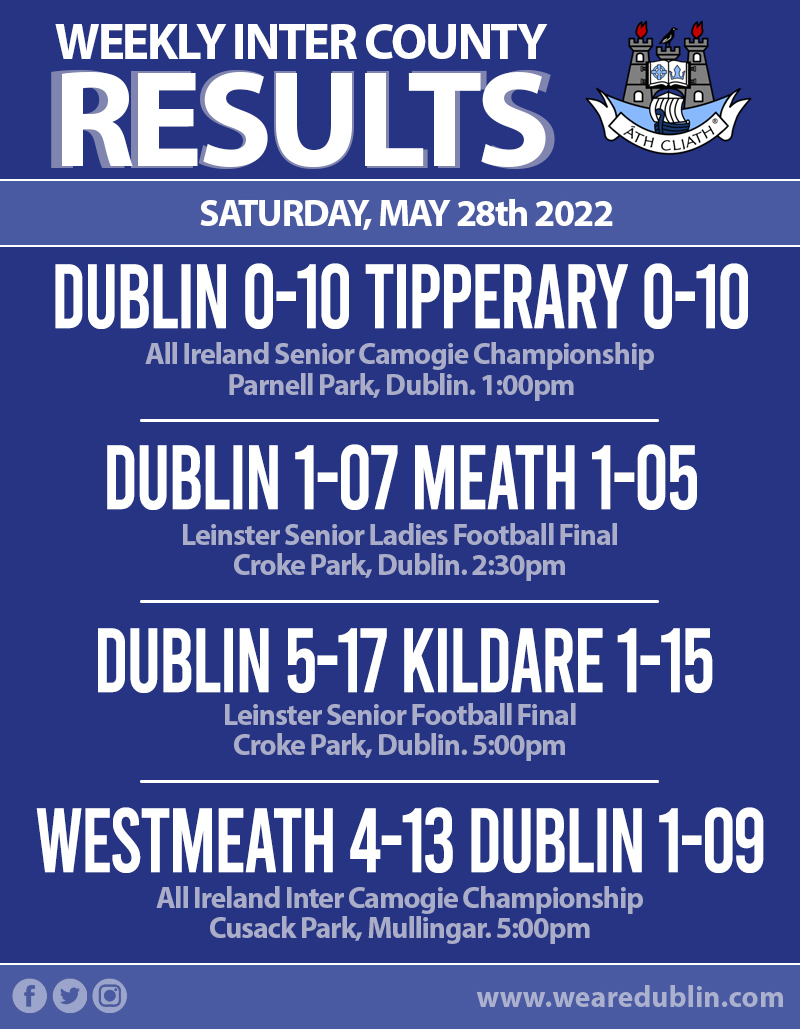 What a day we had yesterday. Obviously couldn’t be at every game, but there was certainly plenty for Dublin supporters to enjoy. Four games over the course of the day with two Leinster Championships decided and plenty of All Ireland Camogie action.

Cait Devane deined Dublin a second win in this year’s All Ireland Camogie Championship yesterday. Bouyed by their 1-11 to 0-12 opening round win over Waterford last week, Adrian O’Sullivan’s panel welcomed Tipperary to Parnell Park and in a tight contest both sides ended on 0-10 each at Full Time.

Tipp illustrated tremendous character to claim a share of the spoils, after playing catch-up for most of proceedings and losing key operator, Róisín Howard to a red card at the three-quarter mark.

It was delicately poised at the break on 0-5 apiece, with Dublin making good inroads thanks to the enterprise of their half-back line and coming out on top in a number of the physical exchanges.

The dream duo of Aislings, Maher and O’Neill shared four points while the ultra-consistent Jody Couch split the posts too to establish a two-point advantage at the end of regulation time, all the Dubs’ scores coming from play.

Devane, who had opened the scoring, provided Tipp’s three points from placed balls but the Premier finished strongly, Grace O’Brien slotting their first point from play and Claire Hogan following up immediately to bring the sides level.

Dublin were one up when Howard received her marching orders and further scores from Maher and Ali Twomey looked significant. Tipp knuckled down though, with frees from Devane to bookend a point from sub Niamh Treacy. Niamh Gannon looked to have snatched it for the hosts but there was still time for Devane to have the final say.

Hannah Tyrrell scored a second half penalty at Croke Park where Dublin secured a ninth consecutive TG4 Leinster Senior Football title with a narrow triumph over reigning All-Ireland champions Meath. The results between the sides favours Dublin by 2 wins to Meath’s one in the provincial rounds.

Having found themselves three points adrift at the break, a superb scoring blitz at the start of the second half put the Royal County in a strong position to claim their first provincial crown since 2000. However, Dublin held firm and Tyrrell’s calm finish propelled her side towards a 16th Leinster crown.

It was a confident and steady performance from Mick Bohan’s side who took their time to pick scores from the opening throw in, while it took Meath all of 29 minutes to turn the scoreboard. Dublin took a 0-05 to 0-01 lead in at the break but the game took an immediate turn on the restart.

Meath registered 1-02 with no reply from Dublin. An Emma Duggan point attempt came off the posts and midfielder Orlagh Lally was on hand to grab possession and fire past Ciara Trant into the net. A Stacey Grimes free put Meath’s noses in front. Tyrrell and Vicki Wall traded scores keeping the advantage in Meath’s favour.

But when Nicole Owens was fouled in the area by Maire O’Shaughnessy, Tyrell held the nerve of county on her shoulders to slot the penalty attempt away. Grimes closed the gap once more but substitute Niamh Hetherton finished out the game with a score to see Dublin win by 0-02.

A proud James McCarthy climbed the steps of the Hogan Stand last night signifying Dublin 12th consecutive Leinster Senior Football Championship win on the bounce. And any doubts of Dublin being a contender for this year’s All Ireland Championship must surely now be a thing of the past.

Five first half goals saw Dessie Farrell’s side in the best form of the season so far. Ciaran Kilkenny, Cormac Costello, Con O’Callaghan and John Small all hit the net in the opening half, ending this fixture as a contest and gave Dublin room to take their foot off the gas on the restart.

With 0-16 advantage at the break, there really wasn’t any need for Dublin to over exert themselves on the restart, and with that Kildare enjoyed some more possession and worked to make the scoreline a little less one sided. Having only scored 0-06 in the first, they chipped away slowly. But Dublin for the most part had a comfortable response each time. Jimmy Hyland grabbed a consolation goal for the Lillies, palming the ball past Evan Comerford.

A strong second half showing from home side Westmeath yesterday evening spelled disappointment for Jimmy Greville’s Dublin Intermediates in their opening All Ireland exchange. Only trailing by 1-07 to 1-03 at half time Dublin conceded 4-06 and only mustered 0-06 as Westmeath stole the show.

Megan Dowdall, Denise McGrath, Emma Broughan and Roisin Scally were on top form, all scoring goals for Westmeath, while Niamh Comerford found the net for Dublin in the 12th minute. Sadly Dublin couldn’t build any momentum from Comerford’s green flag and Westmeath turned on the charm in a strong second half to secure the points.

Next up for Dublin is a trip to Laois next weekend hoping for more positive results over the coming weeks.

That’s the results wrapped up for this week. We have more All Ireland Camogie action next weekend with both the Seniors and Inters in action in their respective competitions. And we’ll bring you news and those results. Stay tuned for more.

Dublin Have No Answer To Rampant All Ireland Reigning Champions Cork