Plenty of action across the two days of the weekend, and plenty to talk about in the weekly results 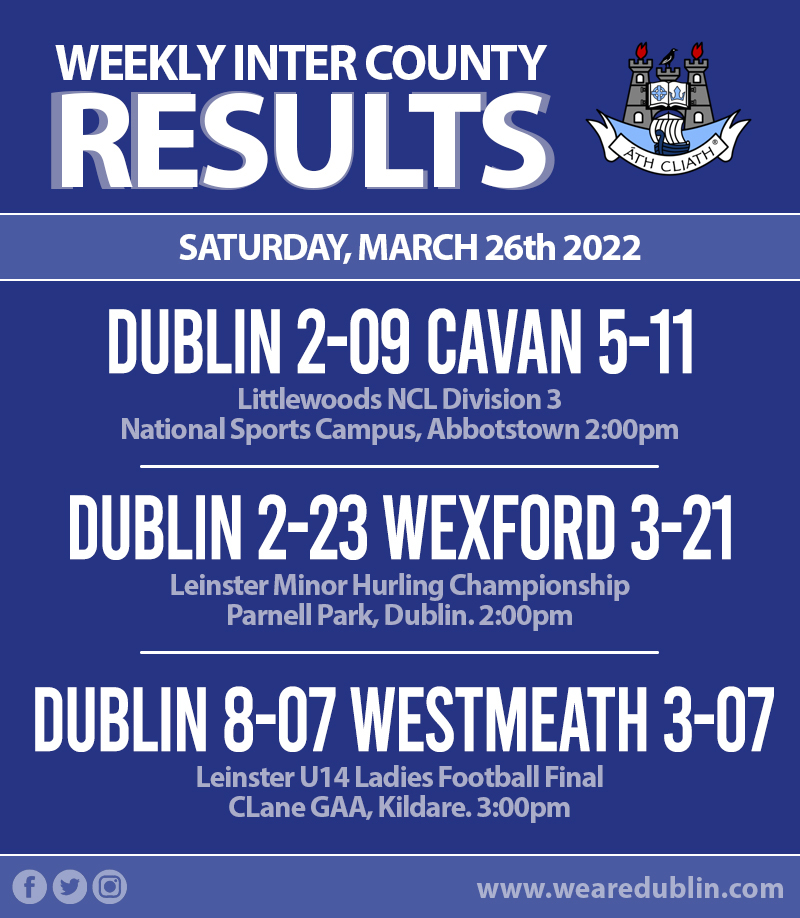 The results this week start with some disappointment as Jimmy Greville’s Intermediate Camogie Panel fell at the hands of Group leaders Cavan in their final round game.

Dublin trailed for the majority of the game. But they did show signs of clawing their way back in a competitive second half. Cavan’s Shanice Fitzsimons stamped the score card with 5 goals across the hour of camogie. And that made it difficult for Dublin to get into a rhythm.

The Dubs did well to haul themselves back into contention, even though Clodagh Keenaghan was in accurate shooting form for Cavan. Points from Aoibhe Dillon, Chloe O’Connor and Niamh Comerfort helped the hosts settle. And it was 2-6 to 1-5 at the change of ends.

Fitzsimons completed her hat-trick ten minutes into the second half but after a Carys Daly green flag made it tight again entering the closing stages, the gifted Denn destroyer racked up her fourth and fifth goals to give the final score a slightly flattering look for the winners.

Despite a strong finsh to the second half, Colm Maher’s Minor Hurlers suffered a defeat to Wexford in their Leinster Minor Hurling Championship opener on Saturday at Parnell Park.

Trailing by 1-12 to 0-09 at Half Time, Dublin found it hard to close the gap on their opponents and were 7 points adrift heading for full time. But a Senan Crosbie goal ignited his team to a late surging finish, albeit too late. Conor Brennan added another in additional time to see Dublin finish on 2-23.

Unfortunately Wexford had put in a solid shift in, and while Dublin really double down in the last few minutes of the game, they did manage to overtake Wexford 3-21, seeing them finish one point winners.

Keaney, in terrific form, steered Dublin to a 3-04 to 1-02 half time lead. And a goal streak in the opening moments in the second half put the game out of Westmeath’s reach. That being said, Westmeath battled right to the final whistle, with Katie Kilmurray bagging a converted penalty and 2 points.

But 8 Dublin goals across the competition saw them finish 15 points clear of Westmeath to comfortably take the Leinster Silverware. 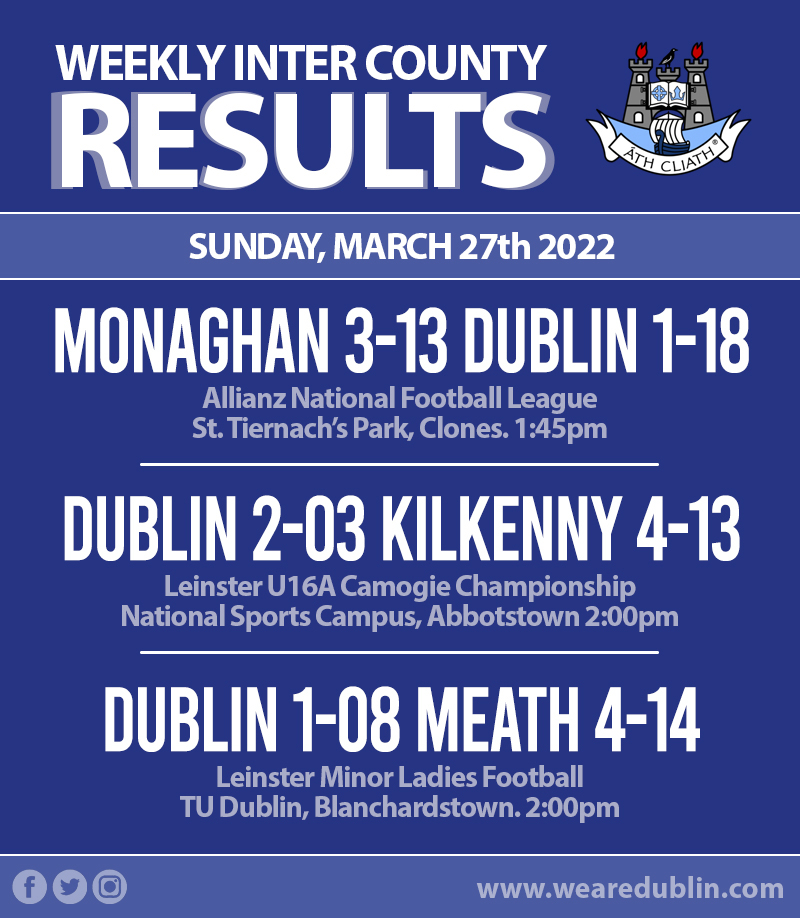 Dublin’s Senior Footballers will be playing their League competition in Division 2 next season after Monaghan secured their top flight status with a one point win in Clones yesterday.

In what was a great encounter, a goal from Sean Jones on nine minutes handed the Farney men the perfect start and they’d go on to lead by 1-7 to 0-8 at the half.

The hosts were minus the services of Conor McManus for this one until the dying stages. But Jack McCarron filled the void, slotting home a penalty six minutes into the restart that had the Dubs seven points adrift.

Dessie Farrell’s men narrowed the deficit back to three via points from Cormac Costello, Sean Bugler and Dean Rock. But a brilliantly finished goal from McCarron that saw the ace attacker chipping the ‘keeper had Monaghan back six to the good.

Dublin battled to the end and looked like snatching a result when they were awarded a penalty which Rock expertly converted.

However, McCarron would have the final say with a coolly stroked free deep in injury-time which preserves Monaghan’s status, demoting Dublin in the process.

Despite losing their opening Leinster Championship game to Kilkenny yesterday, Dublin’s U16 gave manager Niall Daly a lot of positives as they prepare for their next encounter.

On the whole, Kilkenny were certainly the better team yesterday. But even though they’d built a half time 4-09 to 1-00 lead, no one could fault the spirit and determination Dublin carried into the second half.

Dublin dominated possession for large periods on the restart. In turn, they closed ranks at the back, proving effective as they limited Kilkenny to 4 points. They’ll rue some great scoring attempts drifting wide, but they can be content that they competed. And with Offaly up next, they’ll be aiming for a win on top of another positive performance.

The ladies from the Royal County were dominant from start to finish. And try as they might Dublin just couldn’t get a handle on the game. At 2-06 to 1-03 at half time, Meath increased their work rate, sensing victory. Dublin management made changes to try and stifle Meath but the Leinster Champions remained dominant to secure the title.

Dublin now prepare for their next clash against Laois on April 18th, hoping for a victory to get their campaign back on track.