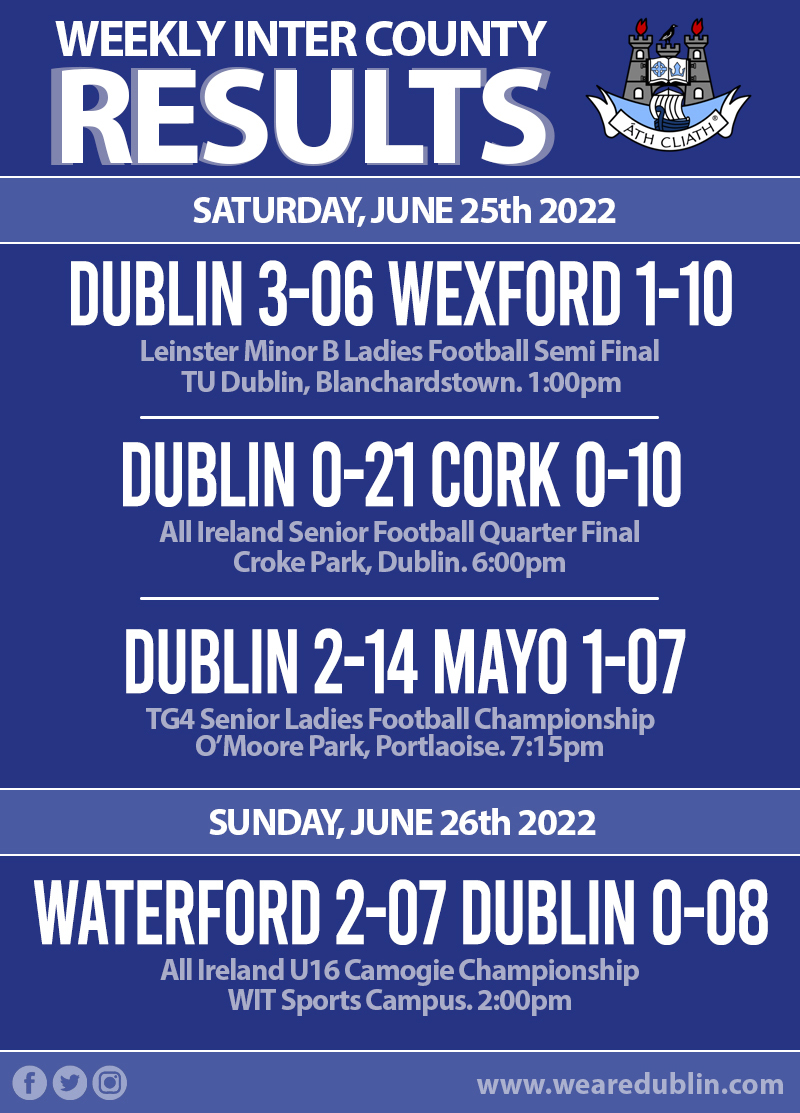 We’ve had another busy weekend with a Leinster Semi Final. And the conrinuing action in other All Ireland competitions in Football, Ladies Football and Camogie. So let’s get you up to speed with new on all the results.

It was a harder fought contest then the girls in blue might have expected dropping down a grade. But nonetheless Dublin prevailed. The game was won in part with 2 goals from Megan McAuley and one from Eabha Ni Maolagain.

Wexford were worthy opponents staying tight to Dublin for large parts of the hour. Caoilfhionn Ni Nuallain tied Dublin’s defence in knots on a large number of occasions, and a goal from the penalty scored Tara Roche gave Wexford every chance of causing an upset. But the Dubs prevailed to advance to this year’s B decider. They’ll meet the winner of the Longford Laois game taking place today.

It’s an eight consecutive All Ireland Semi Final slot for Dessie Farrell’s Senior Football panel after dipensing of Cork last night at Croke Park. Not the spectacle it might have been booked as but the outcome certainly was what eveyone expected.

Despite a spirited performance from Cork in the opening half, Dublin’s route to the last four was never in doubt particularly after a very strong third quarter seeing the Dubs move through the gears, patiently picking off scores to end up 11 point winners.

There was only three scores seperating the teams at half time with Dublin taking a 0-10 to 0-07 advantage into the dressing room. And they pushed on at the restart. Dean Rock was on point once again scoring just under half of Dublin’s return. But credit must go to Jonny Cooper, Michael Fitzsimons and the Dublin back 6 for containing Cork’s attack on a number of frustrating occasions.

The Dubs now await the outcome of this afternoon’s All Ireland Quarter Final between Kerry and Mayo to see who their Semi Final opponents will be.

A Jennifer Dunne inspired win sees Dublin advance to the All Ireland Quarter Finals as Group A winners and will now face Donegal in that fixture.

Carla Rowe finished Dublin’s top scorer on 0-05. Kate Sullivan bagged 1-01 and substitute Lyndsey Davey converting Dublin’s second goal. Lisa Cafferky found the net late for Mayo but it was never going to be enough as Dublin had already put in the ground work to secure the win.

This afternoon’s road trip to WIT Sports Campus saw the Dublin U16 Camogie Panel return home on the end of a 2-07 to 0-08 defeat. Not the best start that Manager Niall Daly would have wanted and the young Dubs now need a result from their final game against Tipperary in 2 weeks time if they want to move forward in the competition.

Dublin were 0-03 to 0-02 ahead with 14 minutes on the clock. Waterford gained control to go 0-06 0-04 ahead and by half time they had taken a 2 score lead into the dressing room thanks to an Abbie Mullane goal.

Mullane struck the net again 10 minutes into the second half, giving Dublin a tough task to claw back the deficit. Sadly they only managed 8 scores, with Waterford recoding 2-07 to claim the win.

And thats a wrap up of this weekend’s Inter County Results. We’ll have more actiont his

Dublin Camogie U16 A And B Squads Head To Clare For...